by C.C. Weiss: Beyond putting rubber on the world’s least-efficient hypercars, the Michelin Group also has its hand in more sustainable inflatable endeavors… 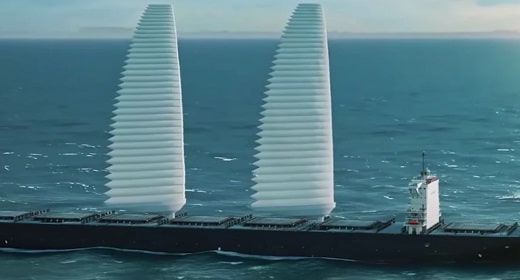 Developed as a joint project between Michelin R&D and two Swiss inventors, the wing sail system isn’t meant to replace ship engines but augment them with a clean, free, readily available power source. The automated sail collapses like an accordion over top of the deck when not in use. At the push of a button, the sail inflates into full, puffy airplane wing-like glory with help from an air compressor and a rising telescopic mast.

Used on its own or in groups, the wing sail transforms wind into forward momentum to decrease overall vessel fuel consumption by 10 to 20 percent, according to Michelin. The company claims that the dual-sided surface of the inflated sail improves performance over traditional flat sails, particularly when it comes to sailing upwind. And we’re sure it doesn’t hurt that the big, baffled sail ties in nicely with the rubbery folds of the pudgy Michelin Man, serving as something of a highly visible Michelin billboard.

The WISAMO system is automated, an important point since merchant ships likely won’t have the manpower or expertise necessary to work a traditional sail. The system also works in repositioning the wing sail(s) to the optimum position for wind conditions.

Michelin says the wing sail is able to hold up to stormy conditions, absorbing energy with its inflated body. Should the conditions prove too rough, it can retract quickly until the skies clear, something that’s also necessary when cruising under bridges and into harbors.

The WISAMO wing sail is a plug-and-play design that can be retrofitted to existing vessels or integrated into new builds. Michelin says that it’s particularly well-suited to commercial roll-on/roll-off ships, bulk carriers and tankers, but can also be used on pleasure craft.

At the push of a button, the wing sails lower to navigate bridge or raise to take advantage of wind on the open water

Michelin highlighted the WISAMO project at this month’s Movin’ On global sustainability summit. It has built a 100-sq-m (1,076-sq-ft) sail, and plans to finish testing atop a sailboat with help from French sailor and racer Michel Desjoyeaux. From there, it will run a trial atop a merchant ship in 2022 ahead of planned production. The company intends for the wing sails to contribute to the much broader long-term goal of cutting 50+ percent of global maritime transport emissions by 2050.