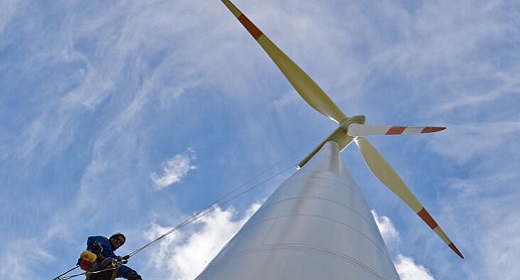 The European Union today unveiled a dozen pieces of legislation that would overhaul the bloc’s economy in an effort to slash carbon emissions.

The sweeping “Green Deal” proposal would cut carbon pollution 55 percent below 1990 levels by leaning heavily on renewable energy and electric vehicles while also introducing a border carbon adjustment on imports and taxing aviation and maritime fuels. Together, the reforms signal the beginning of the end of fossil fuels in the EU. “The fossil fuel economy has reached its limits,” said European Commission President Ursula von der Leyen.

Europe has already begun the transition away from fossil fuels, but it became clear to leaders that it wasn’t happening quickly enough. “We’re not just faced with an industrial revolution; we’re also faced with an existential threat, which is the climate crisis,” Frans Timmermans, European Commission executive vice president for the European Green Deal, said during a news briefing. “You don’t have the luxury to say, ‘Let’s very smoothly develop toward this change.’ We have to do it quite radically.”

The bloc has already cut its emissions by 24 percent below 1990 levels, a feat that took 30 years to achieve. Now, the EU is proposing to trim another 31 percent of emissions by 2030—less than nine years from now— and eliminate the last 45 percent over 15 years. While future technological advancements may help the EU reach net zero by 2050, the process will still be challenging. It’s widely understood that the easiest emissions reductions are typically tackled first, leaving the more intractable problems for later.

Possibly the biggest change proposed in the legislation, and what is likely to be the most contentious, is the border carbon adjustment or tax.

One of the most significant challenges for policymakers implementing climate plans is what to do about carbon “leakage,” or pollution associated with imported goods and services. A border carbon adjustment is essentially a tariff levied against that pollution. It helps level the playing field between EU companies and those in countries with cheaper, more polluting energy sources, though it also disadvantages poorer countries that don’t have the capital to revamp their energy systems.

In its initial incarnation, the EU’s proposed Carbon Border Adjustment Mechanism would cover a short list of products, including cement, iron and steel, aluminum, and fertilizers. Electricity imported from outside the bloc would also be covered. As the system is refined, it would expand to cover more products and services.

To address the concerns of its trading partners, the EU says it will “strengthen” its climate diplomacy to facilitate a global energy transition, including financing for poorer countries, but the bloc is not specific about how that will happen. What those specifics look like will probably play a big role in whether the border carbon adjustment catches on.

The rest of the proposal is much more conventional, tackling a significant proportion of its emissions by going after some low-hanging fruit. To reduce pollution caused by homes, offices, and the like, the EU would direct member states to renovate 3 percent of their building stock every year, or about 35 million buildings by 2030. The grid would also be cleaned up, with 40 percent of energy coming from renewable power by 2030. Another chunk of gains would come from improving energy efficiency across the economy by 36 percent.

There are some relatively easy targets in transportation centered on cars and trucks. The EU wants pollution from cars to be reduced by 55 percent by 2030 and pollution from vans to be reduced by 50 percent by the same date. Those targets may seem aggressive, but this year, 15 percent of vehicles sold in Europe were already either plug-in hybrids or fully electric. BloombergNEF predicts that battery prices will reach the $100/kWh tipping point in 2023, at which point electric vehicles will be cost-competitive with fossil-fuel vehicles.

The EU also intends to add road transport to its emissions trading program in 2026, which would help price vehicular pollution and nudge consumers toward lower- or zero-emission cars and trucks.

Still, the proposed EV targets may leave the most challenging part for last. The EU says it wants zero emissions from new cars in 2035. While that goal aligns with what other countries have pledged, it will be challenging to hit. Governments will have to do more than simply entice consumers to buy EVs with financial incentives—countries will have to build vast amounts of infrastructure to support fast-charging for road trips, on-street charging for people who live in buildings without parking, and in-building solutions for apartment and condo dwellers who have parking.

Another challenging part of the plan is how the EU intends to boost its natural carbon sinks. The EU is relying on forests, soils, wetlands, and peatlands to pick up a significant portion of the slack. The bloc suggests it will get another 43 megatons of carbon locked in natural carbon sinks, a 16 percent boost over today. To put that in perspective, that’s about 1 percent of the EU’s emissions in 2019, before the pandemic.To hit its natural carbon sink goals, the EU says it will work to restore landscapes and plant 3 billion trees by 2030. Those are laudable goals that offer additional benefits for biodiversity and other natural processes like water purification. But we don’t fully understand how carbon cycles through many ecosystems, making any projects challenging to assess.

Like many climate proposals, the EU’s slate of legislation sets aside some of the hardest parts. It leaves the majority of pollution for later generations to solve—an approach that Germany’s top court has already rejected—and it punts on hard-to-eliminate emissions from the aviation and maritime industries.

Aviation is particularly challenging. Planes can’t be too heavy, which rules out today’s batteries for most uses. Future batteries may change the equation, and so might synthetic fuels. But for now, the EU is relying on a carbon tax and nebulous references to “sustainable fuels.”

The maritime industry receives similar treatment, with the EU working to “promote sustainable maritime fuels” by placing a carbon cap on shipping emissions and lowering them over time. The good news is that the EU plans to enforce those limits on all ships “regardless of their flag.”

The EU’s proposal is certainly bold by today’s standards, but it’s unclear whether it goes far enough. Climate Action Tracker, a nonprofit that rates countries’ proposals, says the EU’s target of a 55 percent reduction by 2030 is “insufficient,” recommending that it be ramped up to 65 percent. Without the additional reductions, the group says the plan would leave 7.5 percent of its emissions remaining by 2050.

Still, the EU’s proposals go well beyond those put forth by other major emitters like the US and China. The US hasn’t released a plan to reach net zero, though President Joe Biden has said getting there by 2050 is one of his key goals. China, meanwhile, has said it would try to get to zero before 2060 but hasn’t offered details. The plans proposed by the US and China are rated “critically insufficient” and “highly insufficient,” respectively, to limit warming to less than 2˚ C.

The slate of legislation faces a long road ahead. The bloc’s 27 member states will all have to sign off on it, as will the EU parliament. There’s plenty of division among the EU’s members, with high-carbon countries like Poland likely to resist the changes.