The Expert Who Wants Schools To Give Up Weekly Spelling Tests 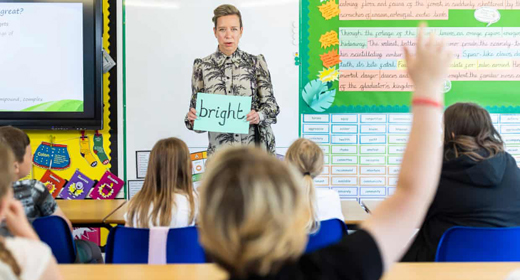 Jane Considine is an educationist with a cause: she wants a total ban on the time-honoured, traditional weekly spelling tests still carried out in many primary schools – the kind that involve a list of words sent home in pupils’ book bags to be taped to the fridge door, with parents expected to weigh in with “look-say-cover-write-check” opportunities in those elusive moments of empty time in the family day. “I’m not anti tests generally,” Considine says. “But school spelling tests have an essential design flaw, which is that involving parents hugely amplifies the opportunity to pile on stress and pressure.”

Parents, says Considine, are A* students when it comes to modelling anxiety– especially anxiety about spelling. And while she couldn’t agree more with parents who say that spelling really matters, she also understands (as a mother of four herself) why passion gets caught up with worries about performance – with the net result that children are disadvantaged, rather than advantaged, by taking home a list of words each week to be fretted over en famille.

Considine has canvassed primary school teachers to find out what they think – and 76% of the 1,362 she surveyed agree with her and think tests are an ineffective way to teach spelling. Only PE is less popular as a subject for primary staff to teach, apparently. The pandemic has not made matters any better: 82% of teachers believe spelling has suffered as a result of the restrictions to teaching over the past 18 months.

For Considine, whose book on spelling has just been published, it was partly Covid that alerted her to the seriousness of the spelling dearth in British primary schools. An Ofsted inspector turned educational consultant, she found herself, in spring of 2020, unable to work in schools during lockdown. “So I decided to do something else: I put the camera on in my living room at home, straight after the Joe Wicks workout, and invited any child who was interested to log on and join me in a literacy drive.”

The feedback from her sessions, she says, was tremendous. “Mums said I’d changed their child’s life by switching them on to writing. That meant a lot.”

What she concentrated on in her online sessions was what she calls “the craft and construction” of literacy. As a former consultant with the National Literacy Strategy, she is evangelistic not only about the usefulness, but also the joys, of being able to use words effectively – and that, of course, includes spelling them correctly.

Next, Considine turned her attention to teachers. “I set up a support group for teachers, #teachersquad. It became a kind of online staffroom – there’s a lot of professional love out there, people sharing lesson plans, talking about how to best serve children in these difficult times.”

There was a lot of feedback about what teachers were finding about spelling and how to teach it; and also, when Considine found herself marking work from pupils via her online classes, she was struck by how shaky their spelling was. “I already knew, from research pre-Covid, that spelling wasn’t good – only 13 % of all 10-11 year-olds, for example, can spell the word ‘coarse’. So spelling seems to me to be on the scale between what I’d call shonky and mediocre. And that’s really sad, because I believe children want to be good spellers.”

In her new book, which is aimed at teachers, Considine outlines what she is suggesting to replace weekly spelling tests. “What we need to do is keep everything within schools, so we don’t up the anxiety. Then, we need to focus on the words each individual child needs to learn to spell – and that’s different for each pupil.”

Considine calls these the pupil’s “focus five”, and says the list should be laminated and on the child’s desk at all times. “The words are tailored for that child, and the idea is to encourage them to put them into their work,” she says. What is not difficult is identifying the five key words each pupil needs: the truth is, she says, youngsters can identify these for themselves. “When they’re editing and reviewing their work, it comes naturally to them to work out which words they’re not confident about spelling correctly.”

Considine, whose own children are aged between 15 and 25, says the bedrock of sound spelling and good literacy skills is reading. “Reading is fundamentally critical because it’s about interplay. But reading gets you so far, and beyond that it’s about sharpening children to be effective word detectives. In the schools that are best at literacy, vocabulary is prized and teachers work really hard with word-catching and word-collecting. It’s about instilling a love of words – and that starts with finding patterns.”

Much of the book is serious teacher-speak. But when asked what parents can do to help their children become better spellers, her answer is simple. “Make sure your child gets eight hours’ sleep a night,” she says. “Read to and with your child. Enjoy your child being a reader. Foster a love of reading through your own relationship with books and words.”

What about IT – won’t spellcheck programs mean a book like hers will soon be obsolete? Do kids today really need to know how to spell? Considine laughs. “Of course spellcheck can be useful – in the same way a dictionary is useful. But what’s crucial is that you need to understand homophones, like practice and practise. Because spellcheck won’t pick up on the misuse of words.”

The bottom line for both parents and teachers, she says, is to recognise the power of words. “We work so hard to let children be connected to books, but spelling misses out because it hasn’t got the razzle-dazzle of writing or the emotive spell of reading. And yet it’s so important, and that needs to be acknowledged. Spelling is the nuts and bolts of writing: once you can do it, you’re on track. You can soar.”