Treating The Brain Through The Stomach

by Shelly Fan: Ask any neuroscientist 20 years ago if gut bug excrement could slow down an untreatable brain disease, and they’d brush off the idea without a second thought… 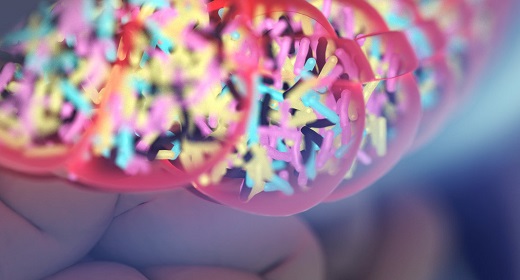 Yet the gut-brain connection has emerged as one of the most tantalizing advances in neuroscience, a true “paradigm shift,” said Dr. Eran Blacher at Stanford University, who recently published a provocative and award-winning essay in Science.

The crux? For devastating disorders in which the brain or its nerve connections gradually disintegrate, maybe it’s time to look south of the neck—towards the gut.

You’ve heard of this class of neurodegenerative disorders. Alzheimer’s, which slowly eats away at one’s memories. Parkinson’s, which wreaks havoc on motor control centers. ALS (amytrophic lateral sclerosis, or Lou Gehrig’s disease), which gradually robs a person of motor abilities by killing off their motor neurons. Despite decades of research, treatment options are limited.

Perhaps, argues Blacher, our dogmatic focus on the brain is what’s been hindering progress. Neuroscience is moving towards a “holistic conception of health” that considers the brain’s functions in concert with our other spongy, slippery organs, rather than as a separate entity studied alone in a jar.

What if we could tap into the gut-brain connection, and treat the brain through a remote “phone line” of sorts through the gut? And even weirder, what if a powerful way to slow down neurodegeneration is genetically-designed yogurt?

We’re host to millions of microbes that live in harmony on our skin or inside our organs. Together, they weigh more than the human brain. Normally, it’s a great symbiosis. Our gut bugs, for example, eat up leftovers and pump out chemicals—metabolites—that can help break down toxic food compounds and synthesize critical vitamins that our bodies absorb. It’s a zoo in there: thousands of species have already been discovered, and like any ecosystem, their composition can dramatically alter their nearby environment.

Over a decade ago, a slew of studies suddenly transformed the gut into a neuroscientist’s new favorite organ. In mice, Dr. John Cryan and psychiatrist Dr. Ted Dinan at the University College Cork found that tweaking gut bugs altered a mice’s behavior. Some became more anxious; others depressed. Yet others showed signs of autism and insomnia.

Wiping out a mouse’s gut microbiome with antibiotics, for example, can severely impact the brain’s ability to generate new neurons in the hippocampus—a region that’s critical for learning and memory. Other studies found that probiotic treatments can help restore depression or anxiety in mice, leading to a “gold rush” to start treating the brain with carefully-engineered yogurt slushies.

“The gut microbiota are considered so necessary and so integrated into host function that some describe this population as an overlooked organ,” wrote Dr. M Elizabeth Sublette and colleagues at Columbia University in a previous commentary.

Further studies found that the gut talks extensively to the brain through multiple microbiome phone lines. Gut bugs can pump out chemicals directly into the blood for a straight shot at the brain. Or they can interact with “neuropod cells” that line the gut, tapping into a direct electrical highway called the vagus nerve to send information up to certain neural circuits in the brain, altering their function.

But what especially caught Blacher’s eye was another channel: that gut bugs can tweak our immune system, which impacts the trajectory of multiple neurodegenerative diseases, including ALS. While ALS has a genetic basis, its impact only accounts for a measly 19 percent or so of cases, suggesting there are other factors that could be a guide towards better treatments.

“I believe that some answers may lie in the gut and that studying the biological processes occurring outside the brain might shed a new light on some old questions in the field and maybe even revolutionize neuroscience,” Blacher said.

Blacher and colleagues began with a transgenic mouse engineered with a mutation, Sod-1, that causes a genetic form of ALS.

Within a month, the mice began showing more severe motor symptoms. When placed on top of a rotating beam they fell more often, and were unable to grab onto a hanging wire compared to their litter counterparts with an intact microbiome. Peeking into the structure of the mice’s spinal cord, the team also found that antibiotics-treated mice had far more cell death in their motor neurons—a symptom of ALS progression.

Because the gut microbiome is sensitive to the environment—we’re surrounded by microbes all the time—the team next moved the mice into a sterile facility. There, they were able to compare the gut microbiome between a Sod-1 “ALS” mouse type and completely normal mice by collecting and genetically sequencing their poop.

Together, they found roughly ten strains of bacteria that rapidly differed between ALS and normal mice. Digging deeper, in a series of “painstaking” experiments, they then one-by-one reintroduced a strain of bacteria back to the ALS mice, pretreated with antibiotics, to see how they behaved.

“We adopted a ‘probiotic’ approach,” said Blacher. The bacteria was mixed inside the mice’s drinking water, like those in yogurt.

One strain, A. muciniphila, particularly stood out. When given to mice once weekly, their ability to perform on the rotating beam dramatically improved—so much so that they rivaled normal mice up to 80 days after the onset of the experiment, or more than half of their lifespan. They also lived longer on average compared to non-treated ALS mice or those given unrelated gut bacteria. Even more incredible, their brains showed less damage at 140 days old, when the lifespan of ALS mice is only 20 days longer on average.

It seems crazy that eating healthy bacteria can slow down a neurodegenerative disease. The team next used a big data approach to hunt down a source for the improvement. They screened all of the metabolites—chemicals that gut bugs pump out into the body—and honed in on nicotinamide, a form of Vitamin B that’s been a darling for combating aging in the longevity sphere.

Skipping gut bugs altogether, the team next pumped nicotinamide directly into ALS mice. Similar to A. muciniphila, the nutrient triggered hundreds of genetic changes related to brain function, with the most impact on the brain’s ability to remove superoxide radicals—a type of chemical that tends to bombard and rip up the cell’s fragile membranes.

While these results are promising, mice and men are very different, and most treatments don’t make the leap. The team next took stool samples from over three dozen ALS patients and 29 healthy family members who share the same environment, and genetically sequenced their microbiomes. While the abundance of different gut bug species were “marginally significant,” the team found changes in several genes related to nicotinamide. Lower levels of the chemical also correlated with worse ALS symptoms.

“This suggests a potential involvement of AM [A. muciniphila] that merits larger studies in the future,” the authors said.

The field of treating ALS or another neurodegenerative disorder with healthy bacteria is still very young. But what’s increasingly clear is that what happens in our gut may have massive, yet undiscovered effects on the brain. Blacher’s results will have to be tested in humans (some similar clinical trials are on the way).

But with new tools in genetic sequencing, which sometimes allow scientists to dip into the genetic pattern of every cell—human or bacteria—we’re entering a new age to rethink treatments for the brain. Add in a dose of CRISPR or other genetic engineering tools, and we could then imagine tailored gut bug treatments, altered to produce chemicals such as nicotinamide, as living pharmacies that live harmoniously inside our guts to delay or even prevent age-related diseases.

Shelly Xuelai Fan is a neuroscientist-turned-science writer. She completed her PhD in neuroscience at the University of British Columbia, where she developed novel treatments for neurodegeneration. While studying biological brains, she became fascinated with AI and all things biotech. Following graduation, she moved to UCSF to study blood-based factors that rejuvenate aged brains. She is the co-founder of Vantastic Media, a media venture that explores science stories through text and video, and runs the award-winning blog NeuroFantastic.com. Her first book, “Will AI Replace Us?” (Thames & Hudson) was published in 2019.