Why Does The Sound Of Water Help You Sleep?

by Adam Hadhazy: The crash of ocean waves, the babbling of brooks, the pitter-patter of rain on shingles — many people swear by these watery sounds to help them fall asleep and stay in la-la land… 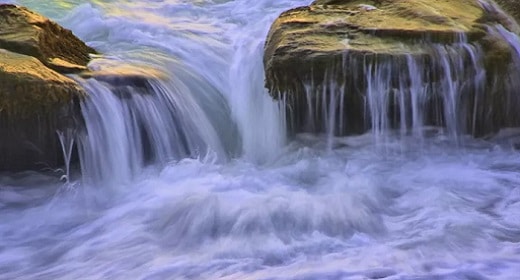 Why does flowing “agua” apparently have such a powerful and popular drowsing effect?

Part of the answer lies in how our brains interpret the noises we hear — both while awake and in the dead of night — as either threats or non-threats.

Certain sounds, such as screams and loud alarm clocks, can hardly be ignored. Yet other sounds, like the wind in the trees and waves lapping ashore, we sort of tune out.

Louder noises in general, as we’ve all experienced, tend to be harder to sleep through. But perhaps even more important than volume is the character of a sound in how it can trigger the brain’s so-called threat-activated vigilance system and jolt us from slumber.

“The type of noise defines if you will wake up or not, controlling for the volume, because the noise information is processed by our brain differently,” Buxton said.

For instance, although the sounds of crashing waves can vary considerably in volume, with quiet intervals followed by crescendos, the waves’ hubbub smoothly rises and falls in intensity.

That’s in stark contrast to a scream or a ringing phone suddenly piercing a silence, reaching peak loudness almost instantly.

“With a scream or a shout, it’s ‘no noise’ and then it goes directly to high pitch,” Buxton said.

This key acoustic distinction between abrupt threat and gradual non-threat was borne out in a 2012 study by Buxton in a hospital setting. Even at low volumes of around 40 decibels — a whisper, essentially — alarms from hospital equipment aroused study participants from shallow sleep 90 percent of the time, and half the time from deep sleep.

Meanwhile, the sounds of a helicopter and traffic, when reaching the level of a shout at 70 decibels, still did not wake participants as frequently as alarms, ringing phones and even relatively quiet human conversations, which again can feature that jarring, no-noise-to-peak-noise delivery.

We humans, it appears, are biologically hard-wired to respond to noises that come out of nowhere because they can be very bad news.

“We’re mammals, but we’re specifically primates,” Buxton said. “Primates will call to alert their troop about threats,” or, in the case of primitive humans living in groups in the wild, “a scream might be someone in the tribe being eaten.”

In either case, a sudden noise is good reason to stop sawing logs and see what the heck is going on.

Another reason watery sounds can help us sleep? Non-threatening noises, especially when relatively loud, can drown out those sounds that might otherwise raise red flags in the brain’s threat-activated vigilance system.

“Having a masking form of noise can also help block other sounds you don’t have control over, whether someone is flushing a toilet in another part of the house, or there are taxis or traffic outside — whatever the acoustic insult is,” Buxton said.

All of which makes it understandable that water-themed sleep aids have proved so popular over the decades, across media ranging from cassettes to compact disks to MP3s to the mobile device apps of today.

“I think apps are wonderful for being able to dial those sounds in and they clearly anecdotally help people sleep,” Buxton said.

Nevertheless, given his study’s and other studies’ findings, Buxton cautions against would-be insomniacs coming to rely too much on a mobile device for cutting some Zs.

“Phones are really terrible at protecting your privacy and quiet,” he said. “You can think you’ve got every notification off, every beep and boop for text and updates and whatever else, but if that phone is not off, you have a decent likelihood of an unintended interruption.”

Some folks, Buxton also noted, react to gurgling water by having to go to the bathroom. If you’re not one of those people, Buxton said, then go ahead and enjoy the soothing melody of a quiet storm.

“I’m a big fan of light rain and medium-distant thunder,” Buxton said. “I sleep really well to that.”