Why ‘Find Your Purpose in Life’ Is Terrible Advice

by Amardeep Parmar: Lessons from the Japanese concept of ‘ikigai’… 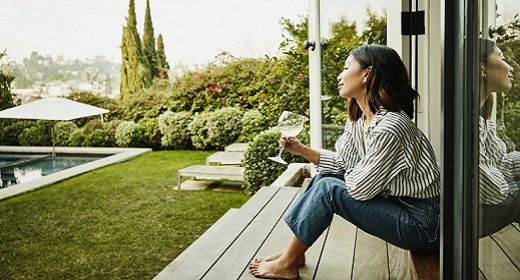 Years ago, during my time in Japan, I went to a bar with an elderly dojo master after five hours of intense karate training. We were soon joined by a rival teacher, and the two men, who had trained together as kids, began sharing stories about their childhood. Eager to learn from the living legends, I asked if they always knew their paths would lead them to where they are now.

Both men erupted into laughter. Of course not, they explained — the idea of one “life path” had never occurred to them. It was a Western concept. I felt foolish.

I’ve been thinking about that moment a lot lately. While in lockdown, I’ve had chats with friends who’ve told me that they don’t want to go back to their “normal” lives once the pandemic is over — that they’ve realized during this time that they don’t feel like they have a purpose. Inevitably, these conversations take me back to my time at the bar with the dojo masters, and the moment when I learned about the Japanese concept of ikigai.

In the West, ikigai has been popularized as a way to find purpose. This Venn diagram is often used to explain the concept: 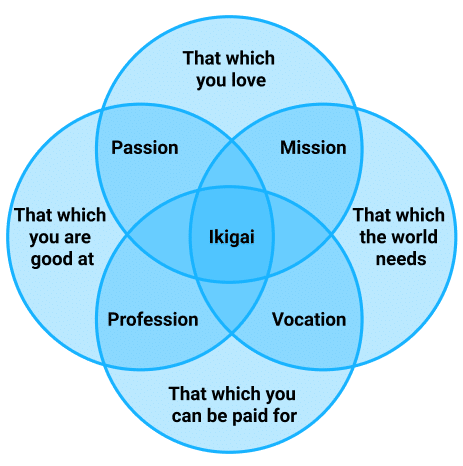 You’re supposed to find something that:

But this explanation overcomplicates it. Put simply, ikigai is what brings you joy in your daily life. It’s not something you need to find, but rather something you already have. Knowing how to see it allows you to enjoy what you do rather than chase what you think you might enjoy.

In Japan, only 31% of people consider their job their ikigai. The others chose friends, family, hobbies, and even pets. It’s not about money — it’s what matters to you. One of the happiest people I met in Japan was a postman. It’s not necessarily a prestigious job, but he loved every moment of his day. He wandered around town delivering mail and stopping to chat with his friends and taking in the life of the city. In the evenings, he shared dinner with his family before karate training with his buddies.

Here in the West, many of us set our identities when we are young and then rigidly stick to them despite the fact that people change. I have friends who decided at age 18 that they would be doctors, spent years getting their degrees, and then realized after working in hospitals that they were no longer the same people who made that decision. Yet their career choice is so tied to their perception of themselves that they can’t sever the link.

In his book Homo Deus, the Israeli historian Yuval Noah Harari explains that we often tell ourselves a fixed story about who we are, when in fact our lives are not one continuous stream. I myself have had a problem with tying my identity and self-worth to a small part of my life: Years ago, my competitive karate career was ended by a string of serious injuries that I kept ignoring. That crushed me. I wasn’t sure who I was without karate. I undervalued everything else great in my life because I was so obsessed.

Finally realizing that my brain was creating a flawed narrative was freeing. It meant I didn’t have to be loyal to past versions of myself that no longer exist. With more balance in my life, I can find joy everywhere. This has made me far more resilient to individual setbacks.

My ikigai is hard to define because it’s in all the small things. My normal day, before the coronavirus, was standing on a train with sweaty people who played their music too loudly. But it never got me down as I loved trying to work out the stories of the other people and what brought them joy. Now I miss my commute.

Still, I’m just bumbling my way through life and enjoying the present. My life could be completely different in five years, but that’s for older me to work out. Being mindful of my ikigai is not letting the good slip through my fingers because I’m too busy reaching for perfect.

The world likely won’t be “normal” for a while. I’m choosing to pay attention to what still lights up my day.