by Jill Suttie: A question-and-answer exercise may help middle schoolers build friendships, including with kids of different ethnicities… 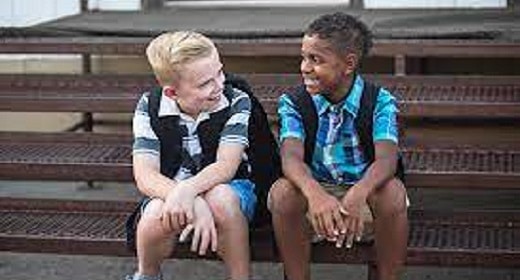 The young teen years are a ripe time for forming friendships. It’s an age when kids are particularly focused on peer relationships and social status, developing their sense of identity and social skills.

Having friendships (or even just feeling a sense of belonging) at school has many benefits. Kids who have friends may adjust to school better and be somewhat protected from peer victimization. Those who make friends in early adolescence tend to have better health and well-being in adulthood, making it critical to a child’s development.

But, while research on teen friendships has confirmed their importance, very few studies have looked into how to foster friendship at these early ages. Even fewer studies have considered how to encourage friendships across ethnic difference—which is of growing importance in an increasingly diverse society.

Now, a new study conducted by Leslie Echols of Missouri State University and Jerreed Ivanich of the University of Colorado has found that the famous “36 questions” that can help people feel close or even fall in love could help prompt friendships in young teens. Not only does this exercise appear to help kids feel closer, it seems to work equally well for middle school boys and girls and across ethnic differences.

“There’s a need for a program that’s direct and intentional for building friendships and providing opportunities for more social acceptance,” says Echols. “This one seems promising.”

The 36 questions activity, also known as Fast Friends, involves pairing people together and having them take turns answering questions that become increasingly more personal and require more vulnerability. It has been shown to reduce prejudice and anxiety when people from different cultures are paired up, but it has never been used as a classroom-wide activity in middle school. That’s what Echols wanted to try.

For her study, 301 young teens at a public Midwestern middle school rated how well they knew other students of the same gender in their class. The researchers used this information to pair them with a student they didn’t know well or consider a friend—either from the same ethnic group or a different ethnic group. Because the school had mostly white and Hispanic students, kids from other ethnic groups (Black, Native American, mixed ethnicity, etc.) were grouped together.

For the first two sessions, the partners spent time asking and answering personal questions, while the third session involved them building a tower structure together in competition with other pairs in their class. For the questions, researchers drew from both the original 36 questions procedure and The Kids’ Book of Questions to find ones that were age-appropriate. Sample questions included less personal ones like, “What foreign country would you like to live in and why?” and “Do you think boys or girls have it easier?” and more revealing ones like, “How would you describe a true friend?” and “Describe your biggest failure.”

Before and after these sessions, students rated how close they felt to their partner and how much they considered their partner a friend. Two weeks after the activity was over, all the students reported again on how well they knew and felt friendly toward other students in their class. Researchers then analyzed how friendships had grown or changed.

The results were clear. Students felt closer to their Fast Friends partner and considered them more of a friend afterward than they did a random student they hadn’t participated in the activity with. This suggests that sharing meaningful things about their lives helped bridge the gap between stranger and friend for these middle school kids.

“It’s amazing how much the students opened up to each other,” says Echols. “There’s a lot of power in the question-and-answer activity.”

Perhaps more surprising, the Fast Friends activity seemed to work well no matter the students’ gender and whether or not they were paired with someone of the same ethnicity.

“The fact that it worked so well for the cross-ethnic pair was so exciting to me,” she says. “It really speaks to the idea that giving students a chance to talk about the things that are important to them, what they have in common, and what supersedes the social boundaries we tend to operate from can build real, authentic friendships.”

Of course, her results don’t necessarily mean that all kids who try the Fast Friends activity will end up becoming actual friends. Still, it does increase the likelihood of that happening, she says. If we get to know a bit about someone we didn’t know before and spend time with them, we are more apt to reach out to them later on.

“Just the fact that the students were able to identify some shared interests and activities may provide a good enough foundation for them to go ahead and start doing those things together,” says Echols.

Besides, even if the connections don’t result in real friendship, there are benefits to increasing a sense of connection to other kids in a classroom, says Echols. Her past research on peer victimization and social adjustment reinforces the importance of empathy-building among this age group and making sure that everyone, especially kids from minority ethnic groups, feels welcome at school.

“Particularly in middle school, where peer victimization rates are so high, if we can encourage kids to understand someone as a human being—know some of their hopes and dreams, what they struggle with—it might help them treat each other a little more humanely,” she says.

Though Echols didn’t measure how the activity affected the overall social-emotional climate in the classroom, teachers told her that it made a positive difference. Students also expressed how much the exercise helped them, something that meant a lot to Echols.

“A couple of girls came to me after one of the sessions and said, ‘Miss, I just found my soulmate,’” she says. “It was heartwarming to see their genuine excitement at having found a friend they really connected with.”

Though the study was done in a small school, Echols hopes to expand her research to see how Fast Friends might work in other settings, including large urban middle schools. She currently has a National Science Foundation grant to study interventions aimed at fighting peer victimization, and the Fast Friends exercise will be one component of it.

She also thinks that it could be effective for teachers to use the Fast Friends exercise at the beginning of middle school—at a time when kids are just arriving from different feeder schools, may not know many other students, and might be more open to exploring cross-group friendships. By getting to know someone of a different ethnicity, students could find the transition to middle school less difficult and more enjoyable—which would likely serve them well in school and in life.

“Even if lasting friendships aren’t created, it could at least build some bridges between individual students and between racial groups,” she says. “It’s exciting that there’s something out there that might make middle school better for kids.”