Can Spiritual Sleep Help You Learn, Heal, and Reach Your Full Potential? 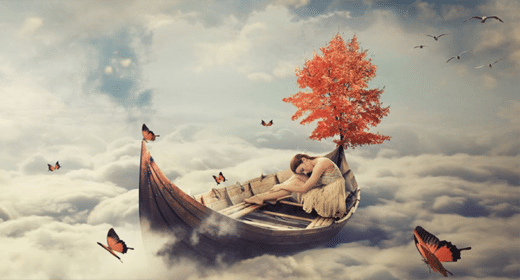 bring on creativity and help you problem-solve.

Spiritual sleep is an ancient practice. The Greeks, for example, would sleep in sacred places in the hopes that a healer god would cure their ills. Their ritual temples belonged to the cult of the Greek demigod Asclepius, who was known for healing. The point of their spiritual sleep was not necessarily to get rest but to be granted a sacred dream.

The idea is also more broadly referred to as dream “incubation,” and nearly all religions have some approach to this spiritual sleep. Perhaps it’s best described in more modern terms as lucid dreaming, a state in which a person is both conscious and dreaming. Judaism, Christianity, and Islam all mention this technique as a way to communicate with God, while Hinduism and Buddhism see it as a means towards ultimate self-awareness. But in every case, it has a transformative effect that is physically, mentally, or spiritually healing or enlightening.

While we may no longer seek out sacred sleep temples to produce this state of altered consciousness, researchers are still interested in the phenomenon and how to induce it. It even continues to play a role in spiritual life, especially for those who want to level up on their meditation practice.

Since the 1960s, sleep scientists have tried to induce lucid dreams in subjects as a means of stoking creativity or solving problems. People in these types of studies are often asked to use an incubation technique to encourage a specific dream that helps them work through their issues. Often, subjects are asked to spend 15 minutes focusing on the issue and hold the image in their mind as they doze off. They often keep photos that remind them of their goal and/or notebooks to record their first waking moments at their bedsides.

Perhaps you wouldn’t qualify this as spiritual sleep, but the practice is deliberate and introspective, and the goal is similar. Subjects that engaged in the incubation techniques found that they were better at solving their problems in a dream state. They were able to tap into a beneficial deeper consciousness, or inner healing power, and wake up feeling empowered. Lucid dreamers have even reported therapeutic benefits such as reducing daytime anxiety.

Spiritual sleep can come in many forms, one being the practice of yoga nidra. Book 1 of the Mahabharata calls it “the deep sleep under the spell of spiritual meditation,” and it is referred to as prajna in the Māṇḍūkya Upaniṣad.

The practice has been westernized, of course. It has come to mean a guided relaxation technique that induces a state of restfulness. It’s often used for insomnia, and many practitioners doze off a bit during their practice of yoga nidra. It’s so effective that even the U.S. Army has adopted the practice, which they call Integrative Restoration (iRest), for the treatment of pain and anxiety in those returning from war.

There are gentle yoga asanas that precede the practice so that restlessness and stiffness don’t become an impediment to focus, but yoga nidra itself involves moving your awareness throughout your body, progressively relaxing muscles from head to toe, monitoring your breathing, and withdrawing from the world around you. Unlike incubation techniques, the goal here is to keep your mind off of other issues. The sleep that follows a yoga nidra practice is healing in the sense that it allows you to wake up feeling genuinely rested because you’ve released your anxieties and pain.

Turning Sleep Into a Spiritual Practice

Some form of spiritual sleep can be used in preparation for bedtime or during slumber itself. It’s all about inducing a state of inner consciousness or tapping into your own thought processes. This is often referred to as metacognition.

For those who have trouble sleeping because of excessive rumination, metacognitive strategies might sound like something that could harm the sleep process. And that’s certainly true if you aren’t training your mind to focus correctly. Those who experience hyperarousal during meditative practices because of intrusive thoughts will require much more practice before they can use introspective methods to induce restfulness or sleep. Testing out meditation techniques in the morning or during the day when anxieties are less likely to affect your ability to rest could be a helpful way to get the hang of metacognition.

Whether or not your spirituality is tied to a specific belief system is largely irrelevant here. When you focus on your inner being, the key is to zero in on what makes you feel calm and helps you understand the way your spirit and soul operate. That can take the form of meditative prayer or deep breathing techniques in an attempt to alter the biochemical processes that regulate sleep, such as cortisol production. The key is to be honest with yourself without judging. After all, you always have the daytime to work through issues that require an active mind.

If the idea of spiritual sleep appeals to you, the first step is to assess what might prevent you from achieving a good night’s sleep and to what extent your restlessness is caused by inner or outer distractions. Are you under extreme stress during the day? Does chronic insomnia give you anxiety as bedtime approaches? Are you experiencing a spiritual crisis? Is your sleep situation less than ideal? (Perhaps you’re a new parent or don’t have a dedicated sleep area away from the day’s stressors.) Or are you simply practicing bad sleep hygiene such as indulging in a few extra glasses of wine and a bit of doomscrolling before bed?

Not all of these are easily fixed, but the beauty of metacognitive or spiritual sleep practices is that with 10-30 minutes of preparation—whether it’s in the form of an incubation technique, yoga nidra, or a general meditative practice—you have the chance not only to sleep better but an opportunity to turn inward and learn more about yourself.