by Thom Hartmann: We already face immense disruption and tragedy. The choice now is whether we want to save human civilization… 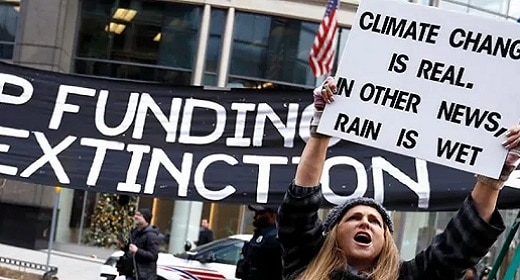 We are standing in an extinction event. Many of us started noticing it when the insects began to vanish in large numbers right after the turn of the century.

I’ll never forget the day the trucker called into my radio show. It was probably around 14 years ago, and he identified himself as a long-haul trucker who regularly ran a coast-to-coast route from the Southeast to the Pacific Northwest dozens of times a year.

The phone lines lit up. People from Maine to California, from Florida to Washington state shared their stories of the vanishing insects where they lived. Multiple long-haul truckers listening on SiriusXM had similar stories.

We had just moved to Portland at that time, living on a floating home in the Willamette River, and the air was often filled with bugs and swallows, small insect-eating birds that fly as fast and sometimes as erratically as bats. A neighbor had a “swallow house,” a box on a pole by the side of her home with a dozen small holes in it where the swallows made their nests.

A decade-and-a-half later, now living on the Columbia River in Portland, I haven’t seen more than a dozen swallows at a time in at least two years. The swarms of gnats, the mosquitoes, butterflies, lightning bugs, beetles and moths that marked spring and summer for most of my 70 years, from Michigan to Vermont to Georgia to Oregon, seem to have largely vanished.

The insect apocalypse is only a leading indicator of what is already a larger disaster for much of humanity and is now beginning to hit the wealthy world (the U.S. and Europe) hard.

Climate change from manmade global warming is here in a way that even fossil fuel billionaires and their paid shills can no longer deny. For the moment, we still — probably — have the ability to determine how bad it’s going to hit us.

We long ago passed the point where we could decide if we were going to let it make our lives miserable. We’re there. In all probability we passed that tipping point several generations ago, when fossil fuel companies and climate scientists were just arriving at a consensus that it was not only real but could be deadly to human life on this planet.

The response of the fossil fuel industry was to follow the tobacco industry’s playbook and fund phony research, create deceptive think tanks and push out highly paid front men and politicians to lie to the American people and the world.

The question now is whether we’ll let our current climate emergency get so far advanced it either wipes out the human race along with most life on the planet, produces such chaos it tears apart civilization or merely disrupts human life so severely it crashes governments around the world and stresses the ability of democracies like ours to continue to function.

Our response in the next few years will decide our fate.

For much of the world, the climate emergency has already rendered governments so incapable of dealing with things that they’ve fallen or are in civil war-level crisis. A global warming-induced increase in the desert areas of Northern Africa, for example, pushed millions of small farmers off their land, filling cities like Damascus and Tripoli with refugees and spiking the price of food.

When a young street vendor in Tunisia set himself on fire in 2010 to protest the explosion in wheat prices there, his act of self-immolation touched off the Arab Spring, producing crisis and revolution in country after country in the region.

Egypt’s democracy fell to a military coup and is now a dictatorship. Tunisia experimented with democracy but just couldn’t withstand the pressure and is now on the verge of collapse. Libya has devolved into a series of neo-feudal city-states. Shen the refugees in Damascus began demanding government services like food and housing, the Assad government of Syria responded with a brutal crackdown that’s led to widespread death and destruction.

ISIS grew out of this climate change crisis as much as it did out of the Bush-Cheney military interventions in the region.

In our own hemisphere, as farmland turns into scrub desert across Central America, climate refugees (particularly from hard-hit Guatemala) began streaming north into Mexico and piling up on our southern border.

In the Western U.S. states, water is becoming so scarce that much of our best agricultural land is endangered as well as the ability of reservoirs and dams to produce the electricity needed by Nevada and Southern California. Another climate refugee crisis in this country as bad as or worse than the Dust Bowl of the 1930s is almost certainly just around the corner.

Even if every country in the world stopped emitting carbon right now, we’ve already gone long past that decision point.  This is the new normal, and it’s starting to really get underway with 120-degree summers and wildfires in the Pacific Northwest, multi-mile-wide tornadoes across the Midwest and hurricanes, flooding and wild summer and winter temperature swings from Florida to Texas, from Kansas to New York.

We decided in the Reagan years, when the science became clear but the fossil fuel giants covered it up and derided as “doomsayers” the outspoken among our climate scientists, that we’d go this far … and here we are.

Our current decision isn’t about whether there will be millions of climate refugees in the Americas or whether every change of seasons will bring thousands of deaths across North America. We’re already there. Our current decision is whether we’ll let modern human civilization as we know it continue or disintegrate.

This concept of civilization-ending climate change now being just around the corner isn’t far out or unprecedented; check out this headline from last week’s Washington Post: “The best place to ride out a global societal collapse is New Zealand, study finds.”

This is not new to the longer arc of human history; local climate changes have ended dozens of civilizations we know about and probably thousands we don’t know about.

Northern Iraq was once a fertile land covered with forests. The Sumerians cut down the trees to build great cities and engaged in unsustainable irrigation practices to grow grains that led to most of the country becoming a high desert and the Akkadian civilization crashing during a major drought in the region 4,200 years ago.

The Epic of Gilgamesh tells the tragic story in detail, albeit in metaphor — King Gilgamesh cut off the head of Humbaba, the god of the forests, so he could use the trees to build the city of Uruk. In response the god of gods, Enlil, cursed Gilgamesh’s land by salting the fields so nothing could grow there.

Local climate change brought down the Mayans, long before the conquering Spanish arrived. Scientists estimate that “annual rainfall must have fallen by around 50% on average and by up to 70% during peak drought conditions,” leading to the chaos, death and conflict with nearby peoples that ended the empire.

Similarly, a 300-year drought ended the Anasazi civilization about 1,000 years ago in what is now Colorado and Utah. Their descendants were scattered across the American Southwest; their society never recovered.

Even Europe was not immune. Between 1550 and 1660 the “Little Ice Age” destroyed crops leading to famine, disease, widespread movement of climate refugees and multiple wars.

But these were all local events. What we’re now looking at is global.

Seven years ago, George and Leonardo DiCaprio, Leila Connors, Earl Katz and I put together a short (11-minute) documentary titled “Last Hours” about a worst-case scenario for our world, something that may mimic “the great dying” of the Permian mass extinction about 250 million years ago.

Few animals larger than a dog survived that event; the world rebooted itself, leading to an entirely new type of dominant animal — the dinosaurs.

When “Last Hours” came out, a few climate scientists took me to task for writing and co-narrating a documentary that would “scare the hell” out of people.

Last week Dr. Jason Box, who I first met when we were putting together “Last Hours,” Skyped into my show from Europe. He’s one of the world’s top Arctic researchers and has been working in the Arctic for nearly 20 years. He had some really, really bad news.

The Arctic, which has been a carbon sink for millions of years, has now become a carbon source. There are several times more carbon trapped in the Arctic permafrost than in our entire atmosphere right now, and as the region warms two to three times faster than the more temperate regions, that carbon, trapped in permafrost and below shallow ice layers, is beginning to seep into the atmosphere as methane and carbon dioxide.

If it blows out fully in future decades it will certainly be civilization-ending, and may well mean that we’ll go the way of so many of our insects today.

There are still things we can do, from reconfiguring our civilization to be more climate-resilient to immediately cutting our carbon emissions to radical efforts to decarbonize our atmosphere. But our options are narrowing day by day, and these will all require worldwide cooperation. (You can expect to hear a lot about this next year when the next IPCC report comes out.)

But in the face of this climate emergency, the Republican Party continues to deny that climate change is even happening.

A couple of Democrats who take funding from fossil fuel billionaires and their industry are even threatening to block a $3.5 trillion reconciliation bill in the Senate that would make us more societally resilient and begin moving our transportation infrastructure away from fossil fuels and toward renewables.

Emperor Nero, it’s said, fiddled while Rome burned. If you don’t want our politicians to continue to follow his example while the world burns, get politically active now.