Everything Manifests When You Meditate!

by Sri Sri Ravi Shankar: Divine and worldly dispensation are one and the same, they are not discrete. God is inseparable from this world. He is all permeating. Sarvam khalvidam Brahma – All of this is Brahman… 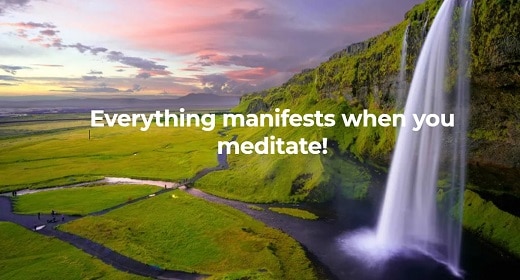 If you stick your hand in a fire, you get burnt instantly. However, if you sow a mango seed or  a coconut seed, in the ground, it takes 4-6 years to bear fruit. Similarly, there are some actions whose consequences are immediate and there are some actions with a delayed outcome. If your grandfather/forefather toils for 20 years to set up a factory, who will enjoy the fruits of his labour – you will! Applying the same logic, karma and its consequences are eternal and beyond comprehension. Some karma can be resolved only by dealing with the consequences, whereas the outcome of some karma can be modified / modulated.

For example, while preparing a meal, the proportion of ingredients can be adjusted with respect to one another. However, once cooked it cannot be reverted back to its uncooked state. Similarly, what your height is today is praarabdha karma(karma that cannot be changed), but your current body-weight can be changed (reduced/increased). That is why doing dhyaan (meditation), japa(chanting), havan(sacrificial fire), daan (charity) helps in changing your karma.

Having an attitude of gratefulness for all that we have received in life also resolves karma. Do not criticize or condemn anyone. However, on the path of Self-knowledge forget about your sins and merits, and just relax and be happy. The more relaxed we are, the more spontaneously (naturally) things get done.

When we were building the ashram, I did not seek advice from a Vaastu consultant. Several years later, some Vaastu specialists commented on how all structures were in their proper place with respect to one another. Our consciousness itself is Shaastra, so if we listen to our consciousness, our intuition, we will function in accord with nature.

Suppose you have no knowledge of electronics, but you need to tackle an electronics issue, you intuitively play around with the wires, and eventually the problem gets resolved. Many people have experienced this. Once I was going from London to Birmingham where I was scheduled to give a talk. This happened more than twenty years ago. Birmingham is a big city. One gentleman realized an hour after we had left London that he had forgotten to obtain the address or the directions to the venue in Birmingham. There were no cell phones then. So I decided to intuitively guide him, telling him to take this turn here and that turn there, until we reached the street in Birmingham on which the venue was located!

Shaastra is not a book, you yourself are the Shaastras. If you study your consciousness, your mind, that is what is in the Shaastra. This is how the knowledge of Vaastu Shaastra, Ayurveda, etc came into being. Dance, music, art, science, have all emerged from the consciousness of the spirit, through meditation. So meditation is supreme.