by Chris D’Angelo and Alexander C. Kaufman: The latest review of climate literature finds that the window to avert catastrophic warming with existing tools is rapidly closing… 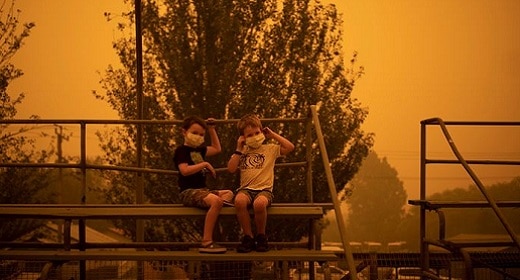 A new United Nations report reaffirms what world governments have known and failed to deal with for decades: that climate change is our fault, is already causing devastation around the globe and will continue to get worse.

The assessment from the U.N.’s Intergovernmental Panel on Climate Change (IPCC) is an up-to-date scientific understanding of planetary warming, as well as its current and future impacts. The international consortium of researchers left no room for debate over the cause of the global crisis.

“The alarm bells are deafening, and the evidence is irrefutable: Greenhouse gas emissions from fossil fuel burning and deforestation are choking our planet and putting billions of people at immediate risk,” he said in a statement.

The lengthy document — authored by 234 scientists from 66 countries and which cites more than 14,000 scientific papers — is the first major update since 2013, when the world’s leading climate science body determined that humans were the “dominant cause” of global warming.

The findings may come as little surprise to anyone closely following the science explaining visible shifts in weather patterns over the past two decades as seemingly biblical catastrophes have become increasingly deadly and commonplace around the world.

But the IPCC’s review illustrates the mountain of evidence showing that, without a herculean effort to rein in greenhouse gas emissions, the world is headed toward even greater calamity. Past and future emissions have already locked in changes that will prove “irreversible” over centuries to millennia, from rising sea levels and ocean acidification to melting ice sheets, it states.

IPCC authors also clearly lay out the differences between each degree of future temperature rise, stressing that every bit of warming avoided will go a long way toward limiting the frequency and severity of extreme heat, drought and weather events.

“We know that there is no going back from some changes in the climate system — however, some of these changes could be slowed and others could be stopped by limiting warming,” Ko Barrett, vice chair of the IPCC and the senior adviser for climate at NOAA’s Office of Oceanic and Atmospheric Research, said during a call with reporters.

In the United States, President Joe Biden is advancing a number of policies to confront a threat that his predecessor, President Donald Trump, not only ignored but dismissed as a hoax. Ballooning emissions and decades of inaction by wealthy nations and polluting industries have rung in an era of extremes. The deadly heat wave that gripped the Pacific Northwest and Canada last month, for example, would have been ”virtually impossible” without human-caused climate change, a recent study concluded.

The crisis is currently affecting weather in “every region across the globe,” from grueling heat waves and historic drought to more intense tropical cyclones and precipitation events, the IPCC said, a reality underscored by the deadly wildfires currently torching broad swaths of Turkey, Greece and the rest of southern Europe.

“These events are already causing great suffering and making our society less wealthy,” Andrew Dessler, a climate scientist at Texas A&M University, said in an email. “But it will be a MUCH BIGGER future problem. The impacts we’re seeing today are occurring with only 1°C (1.8°F) of warming. By the end of the century, when many of the people alive today will still be alive, we could experience 3°C (5.4°F) of warming, which will be accompanied by impacts so severe that we’ll refer to Hurricane Harvey, the [Pacific Northwest] heatwave, and the California fires as ‘the good ‘ol days.’”

Human activity, primarily the burning of fossil fuels, has already driven the average global temperature approximately 1.1 degrees Celsius above pre-industrial levels, and concentrations of carbon dioxide in Earth’s atmosphere are the highest they’ve been at any point in at least 2 million years. The IPCC and the scientific community at large have warned that limiting planetary warming to 1.5 degrees Celsius ― the goal of the landmark Paris climate agreement ― is crucial to staving off potentially catastrophic climate impacts.

But that target may already be out of reach.

The IPCC considered five future emissions scenarios. Under all of them, global temperatures will continue to rise through at least 2050. “Global warming of 1.5°C and 2°C will be exceeded during the 21st century unless deep reductions in CO2 and other greenhouse gas emissions occur in the coming decades,” the summary states.