How To Slow Brain Aging By Two Years

by Dr. Michael Greger: A plant-based diet is thought to have played a significant role in human evolution and the consumption of whole plant foods… 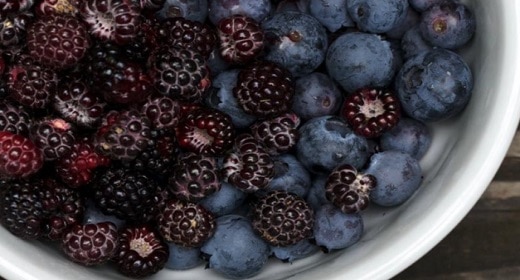 [and even just] extracts has repeatedly been associated with… decreased risk [of] aging-related diseases.” And, by healthy aging, I’m not talking about preventing wrinkles. What about protecting our brain?

Well, fruits and vegetables help reduce the risk of other chronic diseases. Might they work for brain diseases, as well? “There has been a proliferation of recent interest in plant polyphenols as agents in the treatment of dementia.” There are 4,000 different kinds found “ubiquitously in foods of plant origin.” But, berries are packed with them, possessing “powerful antioxidant and anti-inflammatory properties.” And, there’s a subset of a subset called anthocyanidins—natural blue-purple pigments “uniquely and specifically capable of both crossing the blood-brain barrier and localizing inside brain regions involved in learning and memory…” And, that’s where we need it.

The brain takes up less than like 2% of the body weight, but may burn up to 50% of the body’s fuel, creating a potential firestorm of free radicals. So, maybe these brain-seeking phytonutrients in berries could fight oxidation, inflammation, and increase blood flow. So, this raised a “thought-provoking idea.” Maybe a “nutritional intervention with blueberries maybe [beneficial] in forestalling or even reversing the neurological changes associated with aging.”

What other blue/purple foods can we try? Concord grape juice had a similar benefit, improving verbal learning—suggesting that “supplementation with purple grape juice may enhance cognitive function [in] older adults with early memory decline.” Why use juice, and not whole Concord grapes? Because then, you couldn’t design a placebo that looked and tasted exactly the same, to rule out the very real and powerful placebo effect. And, also, because it was funded by the Welch’s grape juice company.

This effect was confirmed, though, in a follow-up study, showing for the first time an increase in neural activation in parts of our brain associated with memory using functional MRI scans. But, this brain scan study was tiny—just four people in each group. And, the same problem with the blueberry study; it just had nine people in it.

Why haven’t large population-based studies been done? Because we haven’t had good databases on where these phytonutrients are found. We know how much vitamin C is in a blueberry, but not how much anthocyanidin—until now. The Harvard Nurses’ Health Study followed the cognitive function of more than 16,000 women for years, and found that “[H]igher, long-term consumption of berries [was associated with] significantly slower rates of cognitive decline in this cohort of older women, even after careful consideration of confounding by socioeconomic status”—meaning even after taking into account the fact that rich people eat more berries. The first population-based evidence that “greater intakes of blueberries and strawberries…were highly associated with slower rates of cognitive decline,” and not just by a little bit. “The magnitude of associations…were equivalent to the cognitive differences that [one might observe] in women up to 2.5 years apart in age.” In other words, “women with higher intake of berries…appeared to have delayed cognitive aging by as much as 2.5 years.”

Why not just take some kind of anthocyanidin supplement? Because there hasn’t been a single study that found any kind of cognitive benefit just giving these single phytonutrients. In fact, the opposite. “Whole blueberries appear to be more effective than individual components, showing that the whole is greater than the sum of its parts. These findings potentially have substantial public health implications, as increasing berry intake represents a fairly simple dietary modification to test in older adults for maintaining [brain function].”