It Came From the Sea–Renewable Energy, That Is

by Larry Greenemeier: Companies and governments are counting on underwater turbines, submerged “wind” farms, and wave-riding electrical generators to use ocean turbulence to keep the lights on… 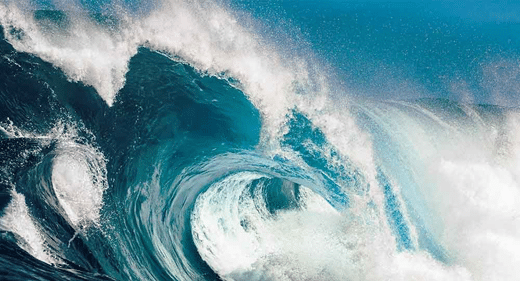 Thirty feet (nine meters) below Manhattan’s East River, next to Roosevelt Island, six turbines—each 16 feet (five meters) in diameter, churning at a peak rate of 32 revolutions per minute—stand at attention on the riverbed. The turbines—which belong to New York City-based Verdant Power, Inc., —are built on a swiveling platform that keeps their nose cones facing the tide, whether it’s coming in or going out. Resembling an underwater wind farm, these kinetic hydropower systems use gearboxes and speed increasers—which convert the slower rotating rotor into a faster rotating generator—to transform each turbine’s mechanical power into electricity.

Verdant’s turbines require tides that move at least six feet per second in order to generate enough energy for them to be cost-effective, and the East River is more than obliging. “The East River is a good tidal channel that links the Long Island Sound to the ocean,” says Trey Taylor, the company’s president and head of market development. “Plus, New York is an expensive place to buy power, so it would be easier here to prove that this could help.” 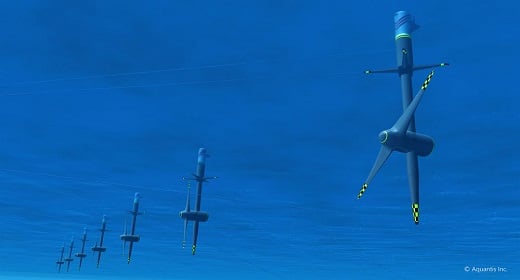 A few dozen feet away from the closest turbine, an onshore control room gets a feed of the energy created by the entire cluster. To prove that this energy could be usable for local businesses, Verdant last year sent a test transmission of electricity to a supermarket and parking garage on Roosevelt Island that were willing to participate in the Roosevelt Island Tidal Energy project.

The Earth’s oceans, pushed by wind and tugged by the moon and sun, ebb and flow over more than 70 percent of the planet, but only recently has technology emerged to finally harness some of that kinetic energy as usable power for us landlubbers. Underwater turbines, submerged “wind” farms and wave-riding electrical generators are being tested around the world, with new advances in technology promising relief for overworked energy utilities. “We consider wave energy to be more predictable than wind,” says Phil Metcalf, CEO of Edinburgh-based Pelamis Wave Power, Ltd., a company taking a different approach than Verdant in developing ocean power–utilizing devices. “You look at the ocean 1,000 miles out, you’ll get a good idea of what to expect over the next 24 to 48 hours. We think it’s actually going to be easier to dispatch to the grid.”

Pelamis’s devices are big red tubes, each 426.5 feet (130 meters) long, 13 feet (about four meters) in diameter, weighing around 750 tons (635 metric tons), and with a life expectancy of up to 20 years. They flex as the ocean swells around them. The wave-induced motion of the tubes’ joints is resisted by hydraulic rams, which pump high-pressure fluid through hydraulic motors that drive electrical generators to produce electricity. Power from all the joints is fed down a single umbilical cable to a junction on the seabed. Three of the tubes, which work best at a depth of 165 to 230 feet (50 to 70 meters) and roughly 3.7 miles (six kilometers) from the shore, can produce up to 2.25 megawatts. 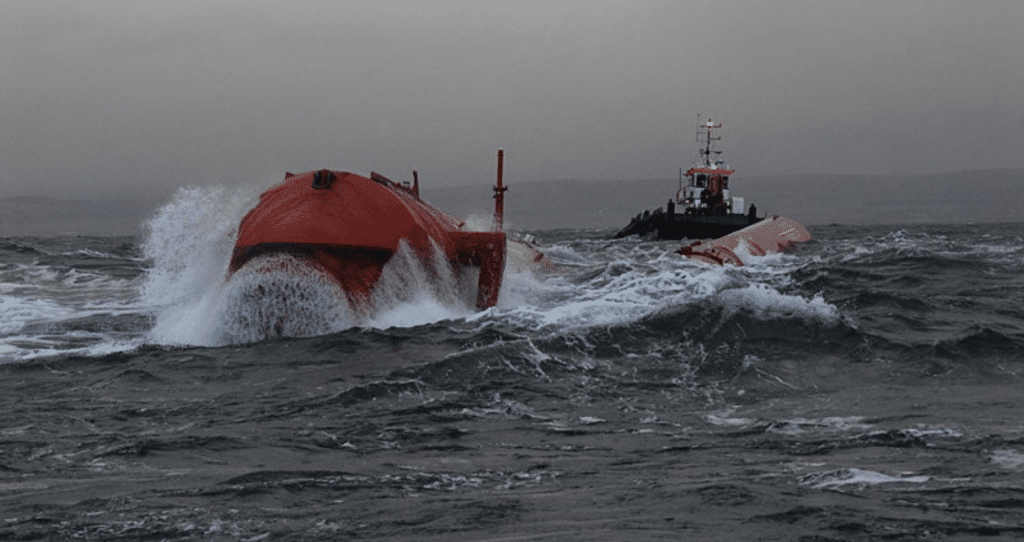 Pelamis—which until September had been called Ocean Power Delivery—has taken its prototype through about 2,000 hours of testing at the European Marine Energy Center’s wave test site near Scotland’s Orkney Islands. Three additional machines will form the initial phase of Agucadoura, the world’s first commercial wave farm, in April off the coast of Portugal, a project developed by Portuguese utility Enersis, a subsidiary of Babcock and Brown. Pelamis is negotiating with other utilities and governments as well, with future deployments depending on how well the Portuguese project is able to turn waves of water into currents of electricity.

The waters around Scotland are also host to tidal turbine testing by several organizations, including Lunar Energy, Ltd., in East Yorkshire, England, which in March 2007 announced a deal with Germany-based power utility E.On UK, to develop a tidal stream power project of up to eight megawatts off Scotland’s west coast.

Meanwhile, Florida researchers may soon be testing both wave- and tide-powered energy technologies that could take advantage of the Gulf Stream, which flows north-northeastward about 15 miles (25 kilometers) off Florida’s southern and eastern shores at more than eight billion gallons (30 billion liters) per second. Researchers at Florida Atlantic University’s Center of Excellence in Ocean Energy Technology in Dania Beach, Fla., are using a $5-million state research grant awarded in late 2006 to develop air-conditioning technologies that tap into the powerful Gulf Stream and large water temperature differences off Florida’s shores. The researchers envision thousands of underwater turbines producing as much energy as 10 nuclear power plants and supplying one third of the state’s electricity. The university is working with academic, government and industry partners on the project, including the University of Central Florida in Orlando, the U.S. departments of Navy and Energy, Lockheed Martin, Oceaneering International, Inc., in Hanover, Md., and Verdant Power, which has provided them with a 10-foot (three-meter) diameter rotor system that they used during 2002 East River tests.

Verdant first began testing its three-blade, horizontal-axis turbines from the surface of the East River in 2002. There have been some hitches: Some of the turbines’ fiberglass blades broke under the tidal force. (The fiberglass blades will be replaced by the end of April with ones made of a magnesium alloy.) 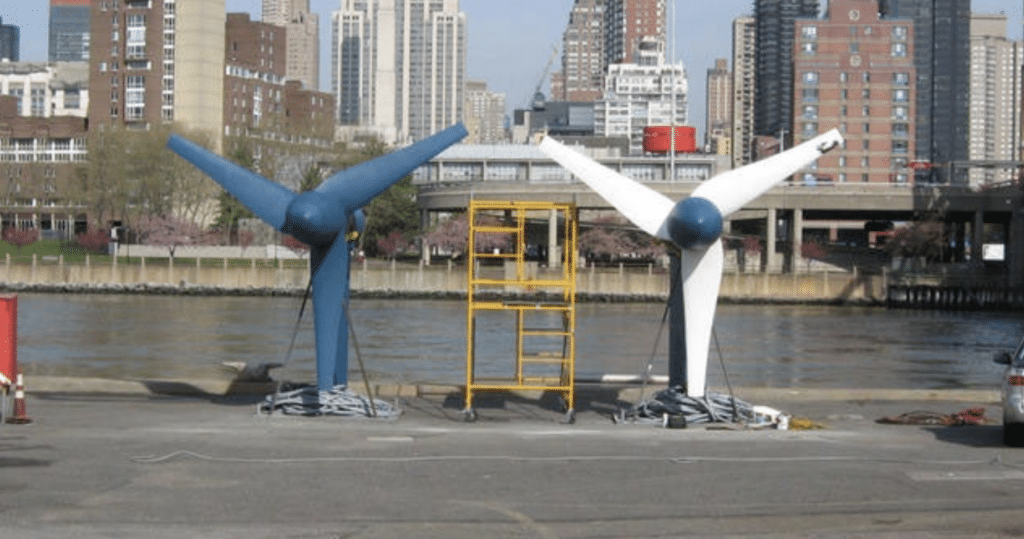 Still, the site has produced nearly 50,000 kilowatt-hours of energy from December 2006 to May 2007. Verdant’s East River testing spot has the potential to support as many as 300 turbines and nearly 10 megawatts of installed capacity. Verdant has been working for the past several years to tweak its tidal turbines so that by the end of 2010 they can deliver up to 1.5 megawatts to the city’s electrical grid (800 households use about one megawatt).

The East River is not Verdant’s only site. The company is also testing its technology in Canada’s St. Lawrence River near Cornwall, Ontario, with the hope of creating a turbine infrastructure capable of producing an output of 15 megawatts. The company is also looking at sites in China and India.

It is unclear just how much it will cost to tap into energy from large bodies of water, since there is no tidal or wave power industry. Verdant’s Taylor says his company is at least two years away from being able to quote costs to potential customers. That said, a rough cost estimate for Verdant’s marine renewable energy technology is up to $3,600 per kilowatt hour—a higher price tag than wind power, fossil fuels or hydroelectric dams today, he says. However, he also points out that Verdant will be able to lower its costs over time through the mass production of its technology and the reduction of inefficiencies in the licensing and implementation processes.

The next step for Verdant in the U.S. is to apply for a Federal Energy Regulatory Commission (FERC) license that would allow the company to continue its pilot project attempting to prove tidal turbines can be a reliable source of energy for the city’s grid. It took four years to secure the necessary permits from the New York State Department of Environmental Conservation and the U.S. Army Corps of Engineers.

That bureaucratic delay speaks to the difficulty of navigating the regulatory processes required to get such turbines into the water. Verdant’s Taylor says his company has spent about $9 million getting its East River project to its current state, with one third of that cost going toward studies gauging how the turbines might affect vessel navigation, aquatic life and fish migration. Although the New York State Energy Research and Development Authority (NYSERDA) chipped in $3 million toward the East River project, Taylor says the time and money spent to secure changing, and sometimes redundant, regulatory approval wastes precious time that could be used testing new technologies. “That’s got to change,” he adds. “The world is burning up, and we’re fiddling.”

For its part, FERC doesn’t see itself as fiddling as much as trying to find the right tune when it comes new hydroelectric technologies. Chairman Joseph Kelliher last year noted, “these technologies present some challenges relating to reliability, environmental and safety implications, and commercial viability.”