Lionel Messi Is Leaving Barcelona, And All We Can Say Is: What?

by Brian Phillips: In a shocking statement Thursday, Barcelona revealed that due to “financial and structural obligations,” the club would not be re-signing Messi. Now the soccer world is left to wonder how this happened and what it means for the future… 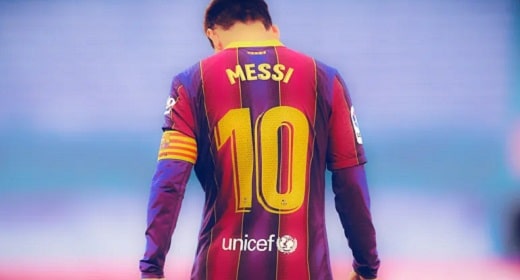 At some point, probably sooner rather than later, we’ll have an explanation for this. Stories with titles like “A Messi Divorce: Inside the 24 Hours That Rocked Soccer” and “How Did It Go So Wrong at Barcelona?” will hit the newspapers; the salient details will be common knowledge by lunchtime on Monday. There are a lot of good soccer journalists in the world, and absolutely all of them are on the phone right now—most probably on six phones at once, like some BoJack Horseman caricature of a stockbroker played by an octopus.

In a few weeks, we’ll remember being surprised. But the sheer galactic kaleidoscope of head-spinning WTF that engulfed the soccer world Thursday when news broke that Leo Messi was leaving Barcelona will be impossible to relive. The most shocking events usually seem inevitable after the fact. Where were you when Elvis died?

Right now, though? I’m still in the kaleidoscope. It’s been about an hour since Barcelona released its statement announcing Messi’s departure from the club, a statement so information-scarce and indecipherable it seems to have been coauthored by a password-manager app. And from every angle I try to understand this, my analysis tops out at: What???

THIS is how it ends?

Messi is the probably greatest player in the history of the world. He’s been with Barcelona since he was a tiny boy in the club’s youth academy; he’s led them to more trophies than most clubs win in a hundred years. The loyalty and seemingly genuine commitment both sides have displayed for more than two decades have been globally romanticized into an emblem of loyalty and commitment in sports. And … they let him go with a 102-word news dump on the website?

“Despite FC Barcelona and Lionel Messi having reached an agreement and the clear intention of both parties to sign a new contract today, this cannot happen because of financial and structural obstacles (Spanish La Liga regulations).”

In the history of sports, has a more cataclysmic outcome ever been explained by a dinkier parenthetical? It’s like, “Despite both Captain Ahab and the crew of the Pequod having agreed to consecrate their souls to the hunt for the white whale, this cannot happen because of structural and legal obstacles (U.S. fishing regulations).”

Actually, it’s even weirder than that. Because—as the statement itself acknowledges—most people thought Messi and the club were about to sign a new deal. They agreed on terms weeks ago. Sure, Messi had wanted out at various times during the past couple of seasons. He’s been linked to a move to PSG for more than a year, and the expiration of his last contract threatened to overshadow Argentina’s run to victory in the Copa America final last month. The relationship between player and club had certainly corroded as Barcelona lurched out of its “Més que un club” era and into its “Més que un dogecoin-based Ponzi scheme” era. But that was before Messi ally Joan Laporta won a new term as Barça president in March. This was all supposed to be resolved. The press release announcing the end of arguably (but not all that arguably) the greatest player-club union in the history of soccer hit at the exact moment we expected the press release announcing his new contract.

Let’s talk about financial and structural obstacles. FC Barcelona is not, and has not been for some time, a well-run organization. Management-wise, Barcelona is currently inhabiting the third act of its decadent-kingpin movie, the part when the protagonist sprawls out in the bathroom in a rhinestone-studded tracksuit with a revolver in one hand and duffel bag full of cocaine in the other. The club’s wage bill alone has been nosebleed-inducing—more than $600 million at one point, and more than 40 percent over their La Liga wage cap as of July—and it was understood that if the club wanted to re-sign Messi, it would have to snip a couple of hundred million out of its costs. The club had been hoping for a wage-limit exemption from La Liga, and had been informed that it could not have one. This is, presumably, the “financial and structural obstacles (Spanish La Liga regulations)” gingerly mentioned in the statement.

Which, from a distance, might look like it explains today’s news. That is, until you realize that La Liga president Javier Tebas made it clear to Laporta in early July that there would be no exemption. This was widely reported at the time. The terrifying bugbear of financial and structural obstacles (Spanish La Liga regulations) did not appear out of the blue this afternoon. It’s been lurking. Yet everyone involved in the negotiations apparently went to work today thinking the deal was fine, until suddenly, with no warning, they checked the soccer news of six weeks ago?

The only level on which this sort of makes sense is that Barcelona has been so incompetent lately, so giddily devoted to the art of the self-own, that you can almost believe they woke up and put their heaviest boots on before going out to stomp on the world’s most gargantuan rake. I mean, this is a club whose cure for wrecking its finances was signing onto the Super League, thus wrecking its reputation. Let’s fill a crater with a crater.

I’ve never seen anything like Lionel Messi’s run at Barcelona. It’s easy to overinflate the value of the present in sports; every generation thinks its best players will never be equaled, but by the time those players reach their 50s, the game has changed, people who didn’t live through the previous era are adult consumers of sports, and your once-untouchable idols end up coproducing HBO documentaries in which they sit in white rooms reminding the world how untouchable they used to be. I know that to be true. If this news holds up, though—and there’s part of me that thinks it’s some kind of harebrained negotiating tactic, or that the Barça PR manager accidentally hit publish on the joke press release they wrote for their friends—it’s hard for me to imagine seeing anything quite like this again.

Messi will go to PSG, or Man City (is this the worst day of Harry Kane’s life?), or wherever, and life will go on. Sports is never as pure or as easy as it sometimes persuades you it is. But it’s jarring—and that’s putting it gently—to see it end like this: a poem cut short before the final rhyme, while the poet still wanted to speak, and the audience was still listening.