Open Up And Say Awe

by Kate Siber: Nature’s healing power may be in its ability to blow our minds… 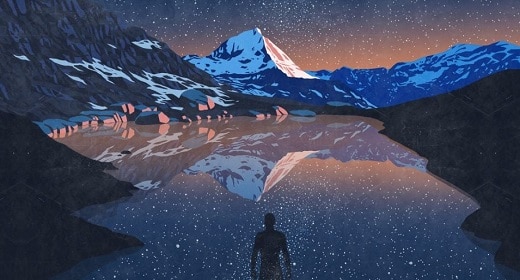 mong the many studies linking time spent outside with health benefits, one of the more intriguing new areas of research is the role awe plays in our well-being. According to findings published last summer in the journal Emotion, the kind of amazement we experience during outdoor activities has a singular ability to predict lower stress and positive emotions like joy and contentment.

Craig L. Anderson, a postdoctoral fellow in psychiatry at the University of California at San Francisco, and his coauthors designed two studies looking at different contexts for awe. In the first study, they followed youth from underserved communities and military veterans suffering from PTSD on one-to-four-day whitewater-rafting trips, asking them to complete daily surveys and journal entries, then checked up on them a week later. The results showed that the more awe the participants reported experiencing, the better their self-reported well-being was and the lower their stress.

For the second study, the researchers asked college undergraduates to record their emotions after each everyday experience with nature over a two-week period. Again, awe, which the researchers defined as the feeling we have in the presence of something exceptional that transcends understanding, proved to have a unique power. While other positive emotions also correlated with daily life satisfaction, the students who reported having awe-inducing experiences in nature—say, watching the sunset or even reading a book under tree—reported the highest levels of short-term satisfaction and longer-term well-being.

“This shows that awe, across these vastly different contexts, can have an impact,” says Anderson. “Its suggests that we don’t necessarily have to go whitewater rafting—just day-to-day awe can be really important.”

The next step: “We need to figure out the dosage—how often people need to do it and what sort of activities are best,” he says. “Then we can make the argument that we should be using health care dollars to get people outdoors and treating our public lands as public-health resources.”