Paul Barton Brings His Music, and a Moment of Peace, to Rescued Elephants

by Mary Jo DiLonardo: The first time Paul Barton played a piano for elephants, an old, blind male named Plara was closest to the piano. 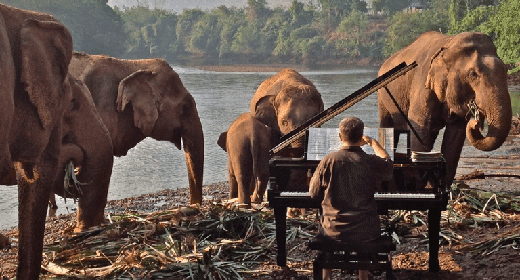 He was one of the many residents at a sanctuary for sick, abused, retired and rescued elephants in Thailand, where Barton had decided to volunteer.

“He was having his breakfast of bana grass, but when he heard the music for the first time, he suddenly stopped eating with the grass protruding from his mouth and stayed motionless all through the music,” Barton tells MNN in an email interview.

“I returned … with the piano and stayed for long periods. There wasn’t many visitors back then so I could spend a lot of time each day alone with Plara and the other elephants. Plara really liked slow classical music and each time I played piano or flute, he curled his trunk and held the tip trembling in his mouth until the music was over.”

Barton says he was heartbroken when Plara died. The elephant’s previous owner had removed and sold his tusks and an infection had set in. Despite the best efforts of the sanctuary veterinarians, the elephant didn’t survive the infection.

A self-taught pianist and classically trained artist, Barton had moved to Thailand for three months to teach piano at a private school. But then he met Khwan, a wildlife artist and animal lover who would become his wife, and they decided to stay. That was 22 years ago.

Here Barton plays to Lam Duan, a blind elephant who is one of the sanctuary’s current residents.

When Barton first found out about the sanctuary, he wanted to do more than just visit the animals.

“I wondered if these old, rescued elephants might like to listen to some calm, slow classical piano music, so I asked if I could bring my piano along and play to the elephants,” he says. “They allowed me to do that.”

Barton soon became a regular. He would sit down at the bench, drawing different reactions from the various elephant residents and sometimes worrying their keepers, called mahouts.

“One of the most memorable [reactions] was playing ‘Moonlight Sonata’ to a big bull elephant called Romsai at night. Romsai is an elephant that mahouts keep away from people due to his strength and dangerous temperament. To be so close to him at the piano under the moon and stars and play music to him was quite special,” Barton says. “He seemed to be listening and, from his reaction, liked the music. He let me live.”

Barton says he knows there are inherent dangers being around such massive creatures, especially the large males. But these are the animals that seem to love the music the most.

“With the bull elephants I am always aware they could kill me at any moment, and the mahouts are aware of it too and I can tell they are nervous for me,” he says. “Up to now, it’s been these dangerous and potentially aggressive bull elephants that are always kept well away from people that have reacted the most to expressive, slow classical music. There is something about the music in the moment that makes them feel calm.”

Each elephant responds in a different way to Barton’s music. And he says his relationships are different with each elephant. Barton says his connection with that first elephant, Plara, is still probably his most amazing experience.

Barton says he has learned that first impressions count with elephants.

“If you want to get on friendly terms with an elephant, the first time you meet, you give bananas. It’s said elephants memorize your scent and will think of you as a friend next time you’re together,” he says.

Some people have told him that elephants can smell fear.

“I was wondering about this as Chaichana, the bull elephant in this photo [above], outstretched his trunk towards me over the piano top and sniffed around my head as I was playing to him,” Barton says. “When I play music to elephants I always feel calm and happy and I thought in that moment as his trunk was close to my face that at least whatever scent I was giving off and he was picking up wasn’t fear. Perhaps Chaichana could smell and recognize the scent of someone that liked him very much indeed? I hope so.”