by Scott Sutherland: Scientists have discovered a mystery at the centre of the Earth. The solid iron core of our planet is cooling faster on one side than the other, and nobody knows why… 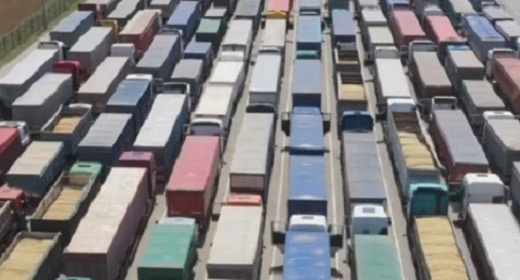 The interior of Earth is arranged in layers. Moving downward from the surface, there’s the rocky crust and mantle, the liquid nickel-iron outer core, and the solid nickel-iron inner core. Crushed under all the weight of the rest of the planet around it, the inner core experiences pressures over 3.5 million times stronger than the air pressure we experience here on the surface. With this intense pressure comes intense heating. The temperature of the inner core is around 5,200°C — nearly as hot as the Sun’s surface. 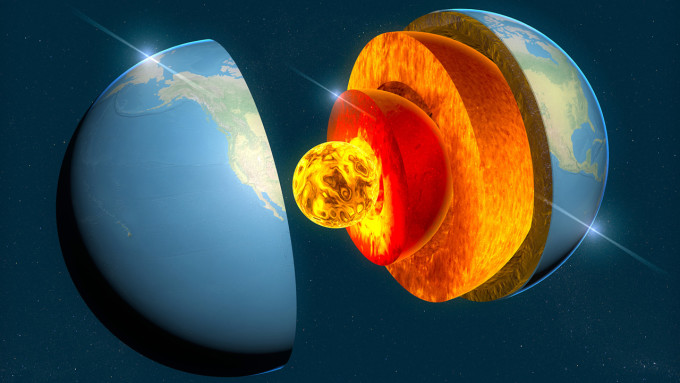 This artist’s impression shows the interior of Earth with its various layers. Credit: Naeblys/Getty Images

As the solid core’s heat radiates outward, it is absorbed by the liquid outer core, which keeps the metal churning around and generating Earth’s protective geomagnetic field. At the same time, the heat lost from the core results in more iron solidifying around it, causing it to grow by about 1 millimetre every year.

There’s something unusual going on with this process, though.

A team of researchers, led by Dr. Daniel Frost, a seismologist at the University of California Berkeley, found that seismic waves behave very strangely as they pass through the inner core.

These seismic waves are generated by the numerous earthquakes that occur near the planet’s surface. As the waves are picked up by various seismic monitors positioned around the world, the differences in how long it takes the waves from an earthquake to reach different monitors can tell us two things. First, since these waves travel quickly through the crust, it allows seismologists to triangulate exactly where the earthquake took place. Second, these waves also travel through the planet’s interior and move at different speeds depending on what kind of material they pass through. Thus, they can provide us with a reasonably accurate picture of the interior structure of Earth. 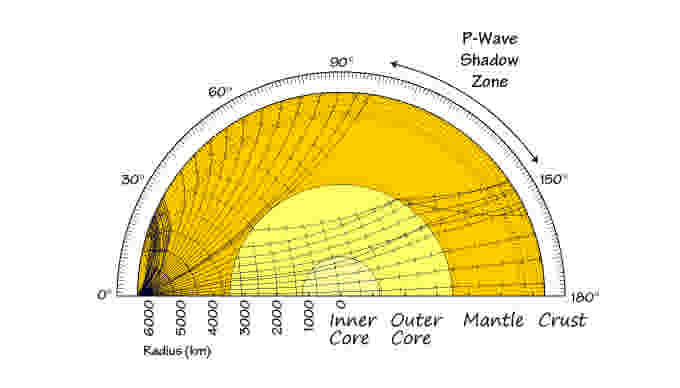 Seismic waves moving through the Earth travel at different speeds through the materials they encounter. As they pass from the mantle to the liquid outer core, the waves are deflected, which produces a “shadow zone” in the seismic data received at the surface. Credit: US Geological Survey/Scott Sutherland

Now, because the inner core is a giant solid metal sphere, seismic waves that reach it should pass through at the same speed, no matter what direction they arrive from. Frost and his colleagues discovered that’s not actually the case, though.

In a new study published in early June, they showed that waves travelling between the poles pass through the core faster than those travelling through from east to west. 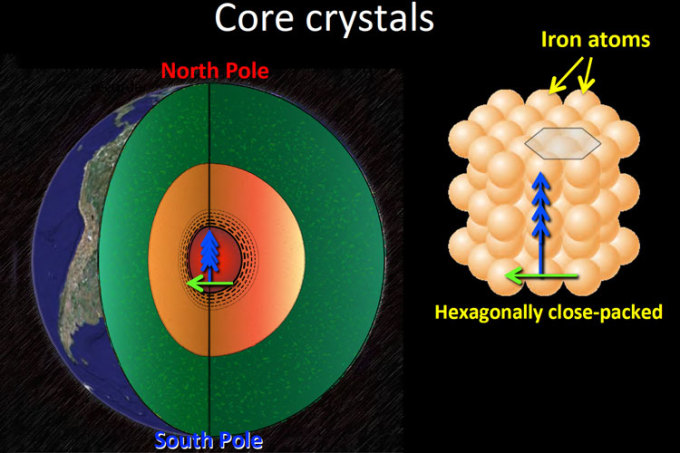 The reason for this appears to be the specific structure of the iron crystals in the core. As shown in the diagram above, they appear to be hexagonal, with the hexagons oriented along Earth’s axis of rotation. However, this is unusual. There’s no reason why they should take on this arrangement. After running highly detailed computer simulations of how Earth’s inner core grows, though, Frost and his team believe they have the answer.

“The simplest model seemed a bit unusual — that the inner core is asymmetric,” Frost said in a UC Berkeley press release. “The west side looks different from the east side all the way to the center, not just at the top of the inner core, as some have suggested. The only way we can explain that is by one side growing faster than the other.” 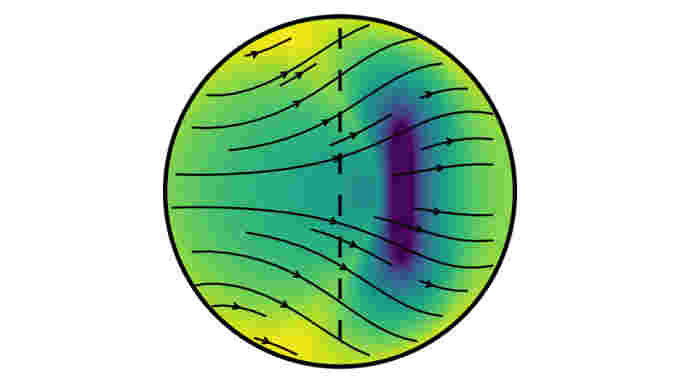 The new model by Frost and his team proposes that Earth’s inner core grows faster on its east side (left). Gravity keeps the core spherical by pushing newly formed iron crystals toward the north and south poles (arrows), which aligns the long axis of crystals along the planet’s rotation axis (dashed line). Credit: Marine Lasbleis

This does not mean that the solid core is physically lopsided. The intense pull of gravity keeps the core spherical by redistributing the newly frozen iron crystals in the relatively ‘soft’ outer part of the inner core. This does show that the core is apparently cooling faster on one side, underneath Indonesia, compared to the other side, which is under Brazil.

At this moment, there’s no telling why this is happening. It has apparently been going on since the inner core formed, some 1-1.5 billion years ago. Does it have something to do with the ‘South Atlantic Anomaly’ — a weak spot in Earth’s magnetic field under Brazil and the South Atlantic Ocean?