The Argentine River That Carries Soybeans To World Is Drying Up

by Jonathan Gilbert: Snaking its way through thousands of miles of South American rainforest and pampas and past sprawling soybean and corn farms, the Parana River is the main thoroughfare for Argentine commerce… 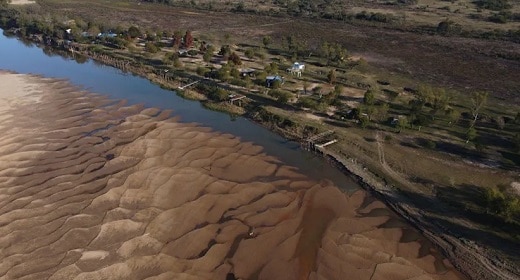 Some 80% of the country’s crop exports flow through its muddy waters en route to the Atlantic Ocean.

So when the river’s levels fell to the lowest since the 1940s — the result of years of scorching drought that scientists attribute to climate change — it deepened the strains on an economy that was already struggling to recover from its pandemic collapse.

Grains traders suddenly found themselves forced to scale back how much they pile onto cargo ships, afraid to get them stuck in the river’s shallow banks, and then either add to their load once they reach deeper sea ports or contract out more vessels. Both are expensive, time-consuming options that have hamstrung an industry that pulls in more than $20 billion annually from exports. Gustavo Idigoras, head of Ciara-Cec, a crop export and processing group whose members include Cargill Inc. and Glencore Plc, called it an “emergency situation” that will likely last through the end of the year.

There’s been a financial toll on the imports side, too: Low river levels mean less hydro power and, as a result, more money that has to be shelled out for shipments of diesel to fuel electricity plants. Diesel imports have jumped to their highest since 2018 as the Yacyreta dam, which usually supplies about 14% of Argentina’s power from its northern river border, operates at just a third of capacity.

The combination of slowing exports and rising imports is cutting into the country’s trade surplus and adding to a slew of factors that are driving down the peso, the worst-performing currency in emerging markets this year. This has prompted the central bank to step back into foreign-exchange markets in recent days and sell dollars to prop up the peso and try to prevent inflation from spiraling even further out of control. Running at 50% a year, inflation is already a major drag on economic growth as it eats away at the purchasing power of tens of millions of Argentine consumers.

“If the shallowness of the Parana persists in the medium term, it’s a problem” because crops are Argentina’s biggest source of coveted export dollars to shore up the peso, and the country has already been slipping dangerously back to becoming a net importer of energy, said Belen Rubio, an economist at MAP, a consultancy firm in Buenos Aires.

The dried-up Parana has exposed a lack of long-term logistics planning in Argentina, she added, with the agriculture industry clamoring for a deeper shipping channel and where dams account for 28% of electricity generation capacity.

The setbacks to Argentine exports have global implications. The nation is a powerhouse of oilseed and grain production, the world’s No. 1 shipper of soybean meal for feeding livestock and soybean oil for cooking and biofuels. It’s the third biggest exporter of corn.

On the domestic front, the ebbing river levels are shaving dollars off the value of Argentina’s sales abroad, with Argentine soy meal premiums trading at record lows versus rival Brazil. Premiums paid for September shipment are about 25 dollars a ton cheaper than in its neighbor, and, even worse, many meal buyers are flocking to Brazil to avoid the higher shipping costs altogether.

The Parana’s situation has gotten so dire that Argentina even declared a water emergency in seven riverside provinces on July 24, which allows the government to take special action to mitigate the impact of the drought and keep businesses and industry going.

The drought has been fiercest at the source of the river in Brazil, largely sparing Argentina’s farm belt 1,500 miles south. In Brazil itself, meanwhile, the dryness has destroyed crop yields.

As for the rising diesel imports, they’re a fraction of the country’s trade surplus, yet still closely watched because they can have an outsize impact.

“Argentina has a hard-currency shortage so even a minimal outflow of dollars to import additional energy adds uncertainty,” said Marcelo Elizondo, an Argentine consultant who specializes in trade. “The question is how long this lasts for.”