by Dr. Alberto Villoldo: While practitioners of yoga recognize seven chakras, my mentor, Don Antonio, taught me that we have nine. Seven of them are within the physical body, and two are outside the body… 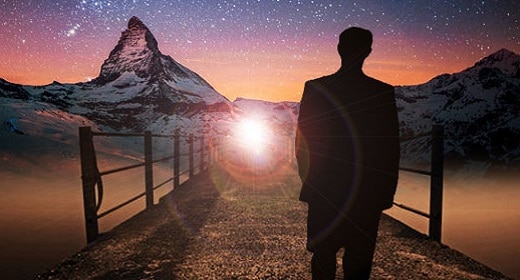 He called the eighth chakra the Wiracocha, which is the name of the Creator or Great Spirit (the word means “sacred source”). This chakra resides within the Luminous Energy Field (LEF) and hovers above the head like a golden spinning sun. It is our connection with the Great Spirit, the place where God dwells within us.

We see this chakra illustrated as the light surrounding Christ, and as the fire that descended upon the apostles at Pentecost when they received the gift of the Holy Spirit. When we die, the eighth chakra expands into a luminous globe and envelops the other seven chakras in a vessel of light. After a period of atonement and purification, the eighth chakra manufactures another body – as it has done again and again over so many lifetimes – and leads us to our new biological parents, and to the best life (not the easiest!) to acquire the experience we need to grow spiritually. The charged, traumatic memories of our previous incarnation are transfused into our next body as imprints in our LEF.

When a person shifts his awareness to the eighth chakra, he can access ancestral memory. He recalls knowledge that he never experienced directly. For example, he spontaneously may remember sitting on the prairies around a fire with the buffalo behind him, or praying inside stone temples above the snow line. The teachings of all shamans who have lived before become available to him. Their voices become his voice, and these ancient teachers live within him.

The eighth chakra corresponds to the Christian concept of the soul, which is personal and finite. Its source is the ninth chakra, Spirit, which is impersonal and infinite.

We call this center a chakra for lack of a better name. In reality it is the dwelling place of Spirit – the spirit of every thing in the Universe. The ninth chakra is the Self that has never been born and will never die. This Self is prior to time, and it never enters the river through which time flows. It is prior to space and existed before the Universe manifested. This is the Self that never left the Garden of Eden.

The ninth chakra resides outside the LEF, at the heart of the Universe. It extends through the vastness of space and connects to the eighth chakra by a luminous cord. The shaman can travel through this cord to experience the vast expanse of Creation. My mentor believed that the eighth chakra is where God dwells within us, and the ninth chakra is that part of us that dwells within the Creator.

The process of the ninth chakra is the ability to keep a secret, even from ourselves. The secret is that a very long time ago, that Immense Force that we know as God, decided from Its place in the un-manifest void to experience Itself. And so, twelve billion years ago, It manifested as a singularity from which all matter in our Universe was formed. The Immense Force continued to explore Itself through all forms of life: as grasshopper, whale, planets, and moons. Yet, since the Immense Force was omnipresent and omniscient, each of Its manifestations also possessed these qualities. Therefore It had to keep the nature of Its being a secret even from Itself in order to know Itself through Its ten thousand forms.

When this center is awakened, there is a deep, rumbling laugh that echoes over the mountains and thunders across the sky.

Additional information about the chakras can be found in my book, Shaman, Healer, Sage. In next week’s blog, we’ll explain the Extraction process in shamanic healing.