The Psychological Benefits Of Giving And Receiving Hugs

by Dr. Audrey: And five reasons why you should make hugging a part of your daily routine… 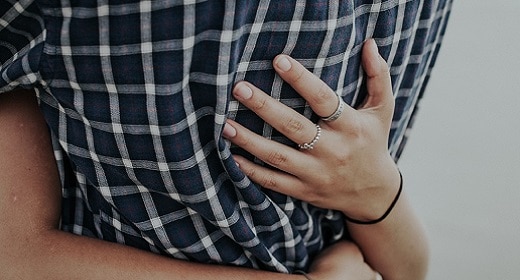 I walked into the café and spotted Ken at the bar. He waved, and I walked straight over.

Before he could even say hello, I blurted out, “Hug me.”

Ken immediately stood up, took one step forward, and engulfed me in his arms. He pulled me to his tall, broad frame and held me tight. I pressed into his woolly sweater and strong arms and let him hold me. He didn’t utter one word while I soaked in his warmth and strength and love. 10 seconds. 20. 30. It could have been a full minute or even two. Ken’s a patient man.

Finally, I pulled back, and he released me.

With Ken, I knew this was true. We were just friends — but good, close friends. The kind of friend you can tell anything to and not regret it, the kind that sees you act crazy and loves you anyway, the kind who listens to you and cries with you. And the kind of friend who hugs you when you request it, no questions asked.

I sat next to Ken, and we chatted. I inhaled deeply. My day had been rubbish. But after Ken’s bear-man hug, I felt grounded. Safe. Secure. And loved. And I knew I’d bask in the warmth of his hug for the remainder of the evening, and even into tomorrow.

Modern citizens of the world, we are busy, stressed, frenetic, disconnected — and out of touch. Literally, we lack touch. Though we’re hyper-connected via FaceTime, Twitter, and Slack, many of us are without adequate and genuine human connection. And we’re not better for it.

In the U.S., almost half of all adults experience loneliness. 47% of Americans describe themselves as either feeling lonely, left out, or disconnected from others.

Aside from the psychological havoc it can wreak, loneliness is dangerous to our physical health, too. It’s even been called a public health hazard. Loneliness is as correlated with early mortality as obesity and even smoking — and its incidence is rising.

Society’s alienation from itself, its divisive stances and politics, its increasing social and professional isolation: all these — and more — are factors in our increasing cultural and personal loneliness.

Hugs should be your daily vitamin.

In fact, you might wanna nab a hug right after you down your daily dose of supplements. Hugs have many hidden benefits. If used (and shared), hugs can become your superpower.

There are many great reasons to become a hugger — and to let yourself be hugged. Research supports multiple and compelling reasons to wrap your arms around someone.

Here’s an armful of super logical and emotional reasons to include hugging at the top of your to-do list.

Touch holds healing power. When we touch, hug, or hold another in a non-sexual way, we give others necessary love and attention. Love is not all we need. We also require connection, conversation — and human touch. Each one of us needs to be held, and everyone needs to be hugged.

Touch is a life-giving power. The human touch activates our orbitofrontal cortex, an area of the brain linked to both compassion and reward. Warm touch creates bonds of affection and trust. It calms cardiovascular stress, and also guards against threat and distress.

When we touch, we reach out to the other. In a world where 1/3 of people are chronically lonely, hugging can help counter the isolation and alienation of social loneliness.

Hugging can make you a healthier human. Studies have shown that hugging reduces stress and can improve your overall health and well-being. Immunity-wise, people who feel they have stronger social support (and who hug and touch more) are less likely to get sick. And, if they do catch a cold or another bug, social huggers experience less severe symptoms and recover more quickly.

Hugging is also good for your heart. Psychiatric researchers at UNC call hugs and affectionate touch with your partner “warm contact.” This warm contact can reduce stress by helping lower blood pressure and increase feelings of love and support. Warm contact is implicated in better cardiovascular health.

3. Hugs Give You the Feels

We love to feel loved, and we love to feel good. Hugs satisfy both needs. When you touch someone affectionately, sit or stand close to them, gaze into their eyes, or wrap them in a big bear hug, our body responds on all levels: emotionally, cognitively, and physiologically.

Oxytocin — the human love drug — is also released when we hug. This hormone reduces blood pressure and stress hormones. According to Medical News Today, oxytocin…

“contributes to relaxation, trust, and psychological stability.” Over time, it makes us feel bonded with another person.

Oxytocin provides feelings of pleasure, contentment, happiness, and even euphoria. These feels feel great — and they’re good for you.

4. Hugs Help You Through Relational Stress and Struggle

In a 2018 study, researchers were interested in finding out how touch and affection influenced partnerships. After interviewing more than 400 adults, Murphy et al. showed that hugging promoted greater relationship outcomes — at least for interpersonal conflict.

A hug could protect against low mood due to an inevitable argument if the hug was given on the same day. Even more intriguing, hugs buffered against future fights. A warm hug followed by conflict the next day reduced the predicted low mood that accompanies discord.

A hug a day keeps arguments at bay. At the least, a hug seems to provide positivity after the negativity of squabbling with the ones you love. Life lesson: Hug before and after you fight!

We are social beings. We are built for community, cooperation, and connection. We rely on social bonds for meaning, purpose, and definition. Side by side, we thrive. In isolation, we more easily falter.

Western culture is not as touchy-feely as other world cultures, but touch is as important. In fact, hugging and non-sexual affection may be more important in our touch-deprived society. We rely on social support to feel part of a group, to refine our identity, and to receive emotional resources during hard times. In times of hardship, trauma, or loneliness, a simple hug can go a long way to conveying both individual and group support.

When we’re down or out, a simple hug holds us, physically, cognitively, and spiritually. A hug tells us ‘You are one of us’. And: ‘You are supported, cherished, and loved.’