What Mandela Learned From War And Peace

by Andrew Kaufman: How to keep hope alive in troubled times… 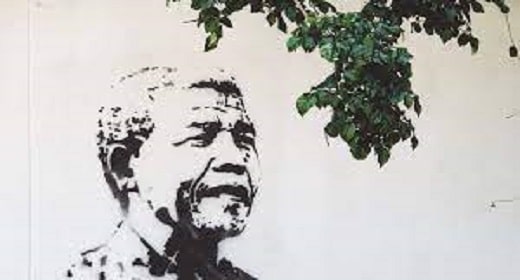 In Long Walk to Freedom, Nelson Mandela singles out War and Peace as a book that had a profound influence on him during his 27-year incarceration. He says that he returned to the novel over and over again, referring to it as his all-time favorite years later.

As the world remembers December as the anniversary of the loss of the greatest moral leader of our time, it’s worth revisiting the masterpiece that helped to inspire and guide him through his darkest days. What Mandela took from Tolstoy’s novel, above all, is a vision of fierce idealism in a broken world.

Tolstoy himself may not have gone through anything quite like the hell that was Mandela’s life, but he knew plenty about the rank injustice, evil, and sheer brutishness that have dominated the world throughout history. He’d witnessed a public execution in Paris and had lived through the European revolutions of 1848, as well as the assassination of Tsar Alexander II, followed by the ultra-repressive regime of Alexander III.

By the end of the century, Tolstoy was reading daily newspaper reports about workers’ riots, bloody bombings by revolutionary terrorists, religious persecution, and pogroms.

And what counts is this: Having lived through all of that, he never lost his faith in the possibility of goodness, of human promise.

In his seventies, Tolstoy asked to be buried on the spot where, as a boy, he and his brother Nikolai had discovered a little green stick—a stick on which they believed was inscribed the secret to universal happiness. “And just as I believed then, that there is a little green stick, on which is written the secret that will destroy all evil in people, and give them great blessings,” Tolstoy wrote in his Recollections (1902), “so now I believe that such a truth exists and that it will be revealed to people and will give them what it promises.”

Imagine that: Someone who’d seen and done all Tolstoy had, still believing in “a secret that would destroy all evil in people.”

In War and Peace, no character embodies the spirit of idealism more than Pierre Bezukhov, the big-hearted, bespectacled Russian count who at the beginning of the novel inherits the largest fortune in Russia. After that, he enters into a disastrous marriage, becomes a leading Freemason before growing disillusioned with its politics, botches his attempts to free the peasants on his estate, and eventually winds up as a French prisoner of war during Napoleon’s 1812 invasion of Russia.

Then, just when he thinks things can’t possibly get worse, Pierre is brought before a firing squad. Prepared to die, he discovers, miraculously, that he has been escorted there only as a witness. Still, the sight of the blindfolded factory worker being shot in the head (which Pierre well realizes might just as easily have been him) is enough to shatter his every illusion he’s ever had about his own power, every ounce of his faith in “the world’s good order, in humanity’s and his own soul, and in God.”

Yet he survives, both physically and spiritually, and emerges from captivity neither cynical nor bitter, but with a redoubled commitment to the ideals he has always believed in. “I don’t say we should oppose this or that. We may be mistaken,” he tells his wife after the war, upon returning from St. Petersburg, where Pierre has been trying to unite conservatives and liberals, who are at each other’s throats over the future direction of the country. “What I say is: let’s join hands with those who love the good, and let there be one banner—active virtue.”

As he was reading all this in prison, Mandela may well have been thinking about his own unfolding life journey. He, too, was born into a noble family, rose to prominence in the African National Congress, got married and divorced, and watched his political dreams crumble and his own life hang in the balance when in 1962 he was sentenced to life in prison after leading a badly botched, non-violent revolutionary campaign.

Like Pierre, he survived prison with his faith intact. Precisely because he refused to accept that conflict is inevitable or that social harmony is a hopelessly Pollyanna-ish goal, Mandela eventually managed to transform a country barreling toward civil war into a democracy.

If to live is to suffer, as Tolstoy understood so well, then to persevere is to find meaning in one’s suffering. Does hardship make us beasts, Tolstoy asks, or better human beings? Do we continually focus on getting what we think we want, or on making something meaningful out of what we have, no matter how minuscule or shabby it might seem?

Nelson Mandela did the latter. Rather than being dragged down by his surroundings, he rose above them, transforming his personal pain into spiritual possibility for the benefit of humanity at large. Not that one must be famous or touched by some grand destiny to exhibit that kind of inner strength; if an unprepossessing nineteenth-century Russian count can do it, Tolstoy shows us, then surely any of us can if we choose to.

As we enter this season of hope and renewal, may we all find strength from the fierce idealism taught by Tolstoy and embodied in the life of Nelson Mandela.