David Welch:  What does it mean to awaken? Is there a process leading to levels or a permanent state?

What are the signs we are making progress? Who and what are we when we are awake? 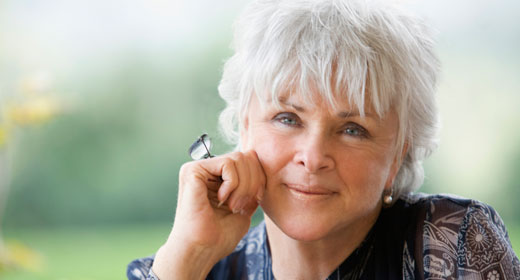 Byron Katie:  If you’re trying to monitor your progress on your spiritual path—if you think you have any idea how far along you are—you might want to save yourself the trouble. There’s no attainment, because you already are what you want to become. Everything separate vanishes in the light of awareness.

When you realize the truth, you realize that it’s no accomplishment. You haven’t done anything; the accomplishment is just the joy of being received by the very thing that you already are. It’s the mind being met by the mind, without opposition. It isn’t personal. The truth sets us free from any attachment to the concepts “self” and “other.” There are no humans; there is no mind; it’s all a dream. The practice of inquiry deletes everything, as long as mind believes that it exists even as mind. The projected world unravels first, and then mind, and any trace that even mind ever existed. That’s my world. When it’s over, it’s over.

The only thing you need to know about enlightenment is whether believing a particular thought is stressful or not. Does the thought hurt or doesn’t it? If it doesn’t, good: enjoy it. If it does hurt—if it causes any stress or uneasiness—question it, and enlighten yourself to that thought. Suffering is optional. It doesn’t have to last for years. It can get down to months, weeks, days, minutes, seconds. Eventually, when the same thoughts arise, the ones that used to make you suffer, you’re at ease with them. In fact, you’re lit; you walk down the street shining like a thousand-watt light bulb. When you think “I need my mother to love me,” you just laugh, because you’re enlightened to that thought, and the next one, and the next.

As it does The Work, mind can lose its grip on identity safely, gently. When you question your stressful thoughts and surrender everything that “you” thought you were, you come to the place where you wonder, “Without that thought, what am I?” Just because an identity appears doesn’t make it true. No one knows what he or she is. The minute it’s said, it isn’t.

Once it thoroughly questions its thoughts, the mind projects a world that’s completely kind. A kind mind projects a kind world. If someone else sees something that’s not perfect, the clear mind can’t comprehend that at first, because it can’t project it. But it remembers its ancient dream-world, when it believed that too, so in the stillness there’s a kind of reference-point, an echo. It’s always grateful for how it sees things, and it understands how others see them. That leaves a lot of energy for it to make amazing changes in the moment, because its clarity keeps none of the options hidden. This is a fearless state of being. There’s no limit to it.

David:  Do you have daily rituals or practices that you follow or recommend?

Katie:  I wake up. I brush my teeth. I shower. And I let the day show me what’s next. As for recommendations, I invite people to do The Work as a daily practice, if they want to have a happy life.

David:  What is the purpose of your life?

Katie:  My job here is to make as many people as possible know that there is a way out of suffering. I don’t expect them to do The Work; I just want them to know that it exists.

David:  Who inspires you?

Katie:  People who are brave enough to question their own stressful thoughts.

David:  If our world is potentially looking down the barrel of an environmental catastrophe, how do we live our lives? What are your thoughts about climate change, the preservation of our planet, and the future of humanity?

I have looked down the barrel of a real gun pointed at me, and on several occasions have heard fearful, innocent people threaten to kill me, and never for an instant was I afraid. Fear is the story of a future. How could I know that the man would pull the trigger? How can I know that an environmental catastrophe will happen or, if it does happen, that it will be a bad thing for the planet? Once you understand this, and begin to live in reality, not in your thoughts about reality, life becomes fearless, loving, and filled with gratitude, whatever the nonexistent future may bring.

The war with reality always sees catastrophes looming, whether these are planetary or personal. It’s a very painful way to live. Maybe an environmental catastrophe will happen; maybe it won’t. In the meantime, I go about my business as if there were no life and no death (and there isn’t). My house is powered by the sun, the car I drive is a hybrid, I’m careful about recycling, I vote for people who say they are concerned about global warming, I support environmental causes. I’m fearless, worry-free, and I do whatever I can. “Get solar panels,” the mind says, and there is no valid reason not to, since all thoughts have been tested by inquiry. The panels are installed, my electric bill is two dollars a month, and at some point I will have put back all that I’ve used, and more. This will match my existence: all traces gone, a grateful life given back to what it came from.

I once gave a talk to a group of environmentalists. It was at a Bioneers conference in San Francisco, and hundreds of people came to listen. Many of these people had given their lives to saving the planet. I talked for a while about my commitment to environmental action, which seems to me the sane and kind thing to do. Then I asked for their thoughts about the environment. They were living with a great deal of anxiety, even terror, they said—an enormous burden on their shoulders. But many of them had open minds and were willing to question the thoughts that were causing them so much stress. I helped them do The Work on thoughts such as “Something terrible is going to happen,” “I need to save the planet,” and “People should be more conscious.” They discovered how these thoughts were driving them crazy, and how the thoughts have opposites that could be just as true.

After a few hours of intensive inquiry, I asked them to imagine the worst things that can happen if we continue to poison our beautiful planet and invited them to make a list. “The planet will become uninhabitable for humans. Thousands of species will become extinct.” And so on. Once they had made their list, we questioned some of their statements, and I asked them to turn the list around: instead of “The Worst Things That Can Happen to Our Planet,” I asked them to retitle their list “The Best Things That Can Happen to Our Planet,” then to find specific, genuine reasons why each item on the list was true. How could it be that the best thing for our planet that it becomes uninhabitable for humans, for example? Many of them didn’t want to go there at first, and there was a lot of resistance and many upset questions, but these were courageous people, and eventually they found valid reasons why every item was the best thing that could happen. “It might be good for some endangered species not to have humans around.” “It would be good for insects.” “It would be good for the rain forests.” “We wouldn’t be pumping and mining the life blood out of the planet.” “Who knows what intelligent species would evolve if we were gone?” They had been dealing with discouragement and burnout for years, and some of them later thanked me and told me how empowering this exercise had been for them.

One of the things you discover when you begin to practice inquiry is that the world doesn’t need saving. It has already been saved. What a relief! The most attractive thing about the Buddha was that he saved one person: himself. That’s all he needed to save, and when he saved himself, the whole world was saved. All his years of teaching—forty years of apparent compassion—were just the forward momentum of that one moment of insight.

For more information or visit thework.com.

David Welch: is the founder and CEO of Awaken Global Media and Chief Editor of AWAKEN.com.   He is the Producer of the award-winning movie “Peaceful Warrior” and a member of the Directors Guild of America and Screen Actors Guild. David is a master practitioner of Neuro-linguistic programming, a certified Kundalini Yoga instructor and has a continuous, committed and daily yoga, meditation and Qi gong practice.