Do Animals Suffer From Post-Traumatic Stress?

by Sharon Levy: Commonly thought of as a human response to danger, injury and loss, there is growing evidence that many animals show lasting changes in their behaviour after traumatic events. 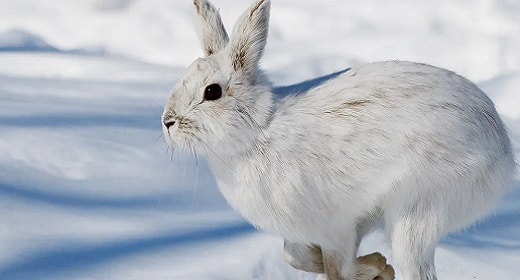 Can they point to an evolutionary source for PTSD?  Every few years, snowshoe hare numbers in the Canadian Yukon climb to a peak. As hare populations increase, so do those of their predators, lynx and coyotes. Then the hare population plummets and predators start to die off. The cycle is a famous phenomenon among ecologists and has been studied since the 1920s.

In recent years, though, researchers have come to a startling conclusion – hare numbers fall from their peak not just because predators eat too many of them. There’s another factor: chronic stress from living surrounded by killers causes mother hares to eat less food and bear fewer babies. The trauma of living through repeated predator chases triggers lasting changes in brain chemistry that parallel those seen in the brains of traumatised people. Those changes keep the hares from reproducing at normal levels, even after their predators have died off.

And it’s not just snowshoe hares, as behavioural ecologists Liana Zanette and Michael Clinchy have shown. Zanette and Clinchy, both at the University of Western Ontario, are a married couple who majored in psychology as undergraduates. Today, they study what they call the ecology of fear, which combines the psychology of trauma with the behavioural ecology of fear in wild animals. They’ve found that fear of predators can cause other wild mammals and songbirds to bear and raise fewer young. The offspring of frightened voles and song sparrows, like those of stressed snowshoe hares, are less likely to survive to adulthood and succeed in reproducing.

These findings add to a growing body of evidence showing that fearful experiences can have long-lasting effects on wildlife and suggesting that post-traumatic stress disorder, with its intrusive flashback memories, hypervigilance and anxiety, is part of an ancient, evolved response to danger. The work is part of a wider scientific debate over the nature of PTSD and whether it is an evolved response shared among mammals, birds and other creatures, or is unique to humans.

Fearful experiences such as being hunted by predators or humans may leave a long-lasting effects on animals (Credit: Arctic Images/Getty Images)

Studies of the ecology of fear started in the 1990s. Before then, scientists assumed that the impact of a predator on an individual prey animal was either deadly or fleeting. If a hare survived a coyote attack, or a zebra escaped the claws of a lion, it would move on and live its life as before.

But research shows that fear can alter the long-term behaviour and physiology of wild animals, from fish to elephants. “Fear is a response all animals mount to avoid being killed by predators,” says Zanette. “It’s enormously beneficial, because it keeps you alive to breed another day. But it does carry costs.”

The reasons to fear are clear. Recent studies have found that up to 32% of adult female giraffes in parts of the Serengeti carry scars from lion attacks, 25% of harbour porpoises in the southern North Sea have claw and bite marks from grey seals and three quarters of manta rays in some African waters bear multiple bite wounds from sharks. These survivors may carry memories of terror along with their physical scars.

Rudy Boonstra, a population ecologist at the University of Toronto, has studied the impacts of extreme stress on the snowshoe hares and other small mammals of the Canadian Yukon since the 1970s. He was inspired by his own family history: Boonstra was born in the Netherlands, where his mother — like many of the Dutch — experienced severe stress during World War Two. “That likely affected her children,” he says. “That sense of stress being a relevant factor in our biology was always in the back of my mind.”

Boonstra knew that during the decline phase of the snowshoe hare cycle, the great majority of hares are killed by predators. But there turned out to be more to the story. When Boonstra’s student, Michael Sheriff, tested faeces of live-caught hares during the rise and fall phases of the population cycle, he found that levels of the stress hormone cortisol in mother hares fluctuated with predator density, peaking when predators were most numerous.

Those highly-stressed mothers, the researchers found, bore fewer, smaller babies. And heightened stress hormone levels were also passed from mothers to daughters, slowing the rates of hare reproduction even after predators had died off and abundant vegetation was available for hares to eat. This explains why the hare population remains low for three to five years after predators have all but vanished from Boonstra’s study site.

Animals stressed by many predators spend more time hiding and less time feeding, so they produce fewer young — but that may allow more adult hares to survive to rebuild the population

Early pioneers of stress physiology focused on human problems and viewed such stress responses as pathological, but Boonstra has come to disagree. He sees the response of snowshoe hares as an adaptation that allows the animals to make the best of a bad situation. Animals stressed by many predators spend more time hiding and less time feeding, so they produce fewer young — but that may allow more adult hares to survive to rebuild the population when the cycle starts again.

Some of the most dramatic impacts of wildlife trauma have been observed in African elephants. Their populations have declined drastically due to poaching, legal culling and habitat loss. Undisturbed elephants live in extended family groups ruled by matriarchs, with males departing when they reach puberty. Today, many surviving elephants have witnessed their mothers and aunts slaughtered before their eyes. A combination of early trauma and the lack of stable families that would ordinarily be anchored by elder elephants has resulted in orphaned elephants running amok as they grow into adolescence.