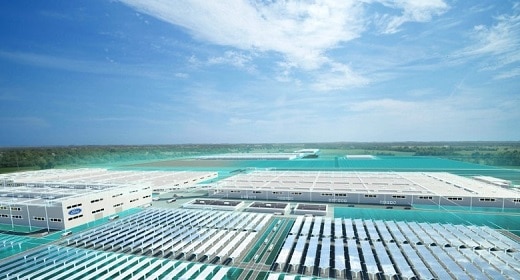 as well as two additional battery facilities in Kentucky, in what the company called the largest investment in the U.S. electric vehicle market at one time by an automaker.

A $5.6 billion mega campus in Stanton, Tennessee — dubbed Blue Oval City — will build next-generation electric F-Series pickups and advanced batteries through a partnership with SK Innovation. The campus is designed to be carbon neutral with zero waste to landfill once fully operational.

“This is a transformative moment where Ford will lead America’s transition to electric vehicles and usher in a new era of clean, carbon-neutral manufacturing,” said Ford Executive Chair Bill Ford. “With this investment and a spirit of innovation, we can achieve goals once thought mutually exclusive – protect our planet, build great electric vehicles Americans will love and contribute to our nation’s prosperity.”

We’re building our first mega campus in more than a generation. The all-new mega campus just outside of Memphis, called Blue Oval City, aspires to have 100% renewable energy, zero waste to landfill, and reusing every drop of water, to ensure our planet is in it for the long haul. pic.twitter.com/O97N9X3ek2