by Runaway climate change risks “catastrophic harm to health that will be impossible to reverse,” the editorial reads… 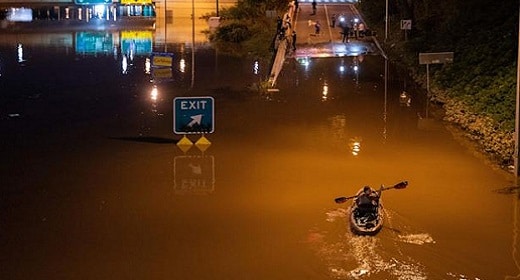 A coalition of more than 220 of the planet’s leading medical and public health journals issued an urgent rallying cry to address climate change on Sunday, saying the greatest threat to global health was the planet’s ongoing failure to rein in carbon emissions.

The editors of the journals wrote the impassioned joint plea, warning humanity was already facing irreversible threats to public health just weeks before the United Nations is set to meet for its general assembly later this month. The threat was so urgent, they wrote, that countries can’t wait for the end of the COVID-19 pandemic to begin reducing emmissions.

“Health is already being harmed by global temperature increases and the destruction of the natural world, a state of affairs health professionals have been bringing attention to for decades,” the call, published in journals including the Lancet, the New England Journal of Medicine and the British Medical Journal, reads. “The science is unequivocal: a global increase of 1.5 degrees Celsius [2.7 degrees Fahrenheit] above the pre-industrial average and the continued loss of biodiversity risk catastrophic harm to health that will be impossible to reverse.”

A joint editorial published in biomedical journals across the globe calls for swift and decisive action on climate crisis. #HealthyClimate https://t.co/5BMVoUUpNr pic.twitter.com/P3avUzSrvK

The publication comes shortly after Hurricane Ida made landfall in Louisiana as a Category 4 monster, packing 150 mph winds and causing widespread havoc from the South to the Northeastern United States. Scientists have long said that climate change will increasingly spark more intense and more regular extreme weather events, including storms like Ida as well as severe drought, rampant flooding and unprecedented rainfall.

A study published in May found more than a third of heat-related deaths in many parts of the world can be linked to warming made worse by climate change and others have warned of dramatic changes to the environment, mass extinction and conflict linked to the phenomenon.

The editorial also follows a report issued in August by the Intergovernmental Panel on Climate Change, which found temperature warming thresholds of 2 degrees Celsius — the point at which scientists say the planet must remain beneath — would soon be “beyond reach“ without dramatic and rapid reductions in greenhouse gas emissions. UN Secretary General António Guterres said at the time the report was a “code red for humanity,” urging countries to act decisively to avoid the worst climate-related effects.

The journals said Sunday the consequences of failing to act would fall disproportionately on many communities and countries that have contributed the least to create them, although the editors wrote no country would be shielded from a warmer world.

“The greatest threat to global public health is the continued failure of world leaders to keep the global temperature rise below 1.5° C and to restore nature,” the journals wrote on Sunday. “Urgent, society-wide changes must be made and will lead to a fairer and healthier world.”