Love And The Soul: The Timeless Tale Of Cupid And Psyche

by Stephen Harrison: The story of Cupid and Psyche forms the centrepiece of the Latin novel Metamorphoses – or The Golden Ass – by the second-century AD writer Apuleius… 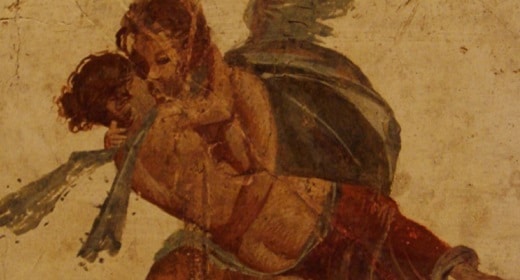 His tale narrates how the beautiful princess Psyche (ψυχή, “Soul”, in Greek) gains the enmity of Venus but the love of Venus’ son Cupid (or Amor, “Love”, in Latin). A series of tribulations and adventures ensues. There are jealous sisters, a husband of mysterious identity, a dramatic revelation scene, surreal speaking objects and animals, and an epic-style journey to the Underworld. Finally, Cupid and Psyche are united in happy marriage, which allows Psyche to become a goddess. This story has enjoyed an extraordinarily rich reception through the five centuries from the rediscovery of Apuleius’ novel in the Renaissance to the present day.

Over the last few years I have been working on a study of the reception of this story in selected areas of European literature since the time of Shakespeare. I have previously written two volumes on Apuleius[1], and my current research, which is a joint enterprise with Regine May of the University of Leeds, will result in a third book, a reception study. Our project ranges across literary genres in English, French, German and Dutch, encompassing poetry and drama as well as prose fiction, with occasional glances at opera, film and the visual arts.

The question of the relationship of the Cupid and Psyche story to the development of the modern fairy-tale is fascinating, since the story obviously resembles a fairy-tale in its fantastic elements and happy ending. It has been argued persuasively that Apuleius’ novel generated some supposed folk-tale patterns, rather than vice versa, as commonly held previously:[2] the ‘Cinderella’ story with its malevolent pair of older sisters and its beautiful, suffering and ultimately gloriously married youngest sister derives from Cupid and Psyche, while the tale’s idea that a handsome husband could be a monster looks like the origin of ‘Beauty and the Beast’. The consequences of this for the reception history of the Metamorphoses and its key role in the history of the modern fairy tale have never been fully followed up.

Amajor context for the study is the court of Louis XIV of France in the 1660s, then the cultural centre of Western Europe. The fabulist Jean de La Fontaine’s substantial and interesting adaptation of the Cupid and Psyche story (written in 1669 and narrated in the gardens of the then-rising Versailles) was itself adapted for the stage by Molière and others, with music by Jean-Baptiste Lully. It also stimulated a controversy with one of the founders of the modern literary fairy-tale, Charles Perrault, as part of the so-called “Quarrel of the Ancient and Moderns” in France towards the end of the 17th century: in this spirited altercation, the opposing sides debated the relative importance of Classical and modern literatures. Perrault claimed that his own verse fables were morally more improving than the equivalent stories of antiquity – and that of Psyche in particular.

As already noted, Cupid and Psyche was also a point of origin for the fairy story of ‘Beauty and the Beast’: in Apuleius there is initial ambiguity about whether Cupid is a monster, and his magic palace has invisible servants, both elements still recognisable in the Disney Beauty and the Beast films of 1991 (animation) and 2017 (live action with Emma Watson).

This link with ‘Beauty and the Beast’, a story shaped in its best-known form by a series of French female writers between 1695 and 1757, as Marina Warner has brilliantly shown,[3] points to a fascinating feature of the reception of this particular Classical tale. Unusually, Cupid and Psyche presents a narrative from the Greek and Roman world in which a woman is the successful protagonist. As in the Greek love novels of the early Roman empire to which Cupid and Psyche is clearly related, the heroine Psyche is the central character, who perseveres in her quest to find and marry Cupid, and is rewarded with the immortality more often associated with male figures such as Hercules. Psyche has consequently been a popular topic with female writers, including Elizabeth Barrett Browning,  Eudora Welty and Sylvia Plath.

Illustrations of Cupid and Psyche in art since 1650 are widespread, as they had been in the Renaissance. In La Fontaine’s version, Cupid and Psyche became the subject of a celebrated series of high-art Empire grisaille wallpapers by Dufour (Paris) in 1816, while William Morris’ extensive poetic treatment in his poem The Earthly Paradise (1868–70) led to a considerable number of artworks by Edward Burne-Jones. The two projected an illustrated edition for the Kelmscott Press which never emerged, but some of the illustrations survive alongside a number of important Burne-Jones paintings of the Psyche story, many now in UK and US public galleries.

Cupid and Psyche was also an object of fascination to the Decadent writers at the end of the nineteenth century, who saw Apuleius as late and mannered like themselves. For example, Marius The Epicurean, the 1883 historical novel by Walter Pater, Oscar Wilde’s Oxford tutor, contains a famous version of the story narrated by Apuleius as a fictional character, a version which had an impact on Wilde’s early fairy stories. More recent receptions include a 1944 radio play by the Anglo-Irish poet Louis MacNeice, a 1956 fantasy novel by C.S. Lewis (Till We Have Faces), and elements in A.S. Byatt’s 1990 Booker-winning novel Possession. Contemporary receptions continue in poetry, in staged drama, opera and musicals, in fiction and in film, as well as in the visual arts.

This summary can give only a small taste of the rich material available. There is far too much to be covered in a single volume; Regine and I have just co-edited a multi-author conference book which contains more than twenty essays,[4] and the forthcoming joint monograph will cover only some highlights from which the above details are in turn a selection.[5]

Our concentration on a few selected regions and epochs means that many areas of exciting research remain to be explored: evidence of this is the lively conference held earlier this June in Poznań (and online), ‘The metamorphoses of Apuleius: from ancient texts to modern reception’, which included several papers on the reception of Cupid and Psyche. We have left much of Western and Eastern Europe untouched: we have only a little material on Italy and Spain, whose early modern literatures are rich in our story, and nothing on Russia, where recent scholarship has suggested that Pushkin’s great poem Eugene Onegin (1825–32) has links with Apuleius’ tale. As David Damrosch has put it, “a great work of literature can often reach out beyond its own time and place.”[6]