by Marc Carter: The new EVs range from an electric version of the iconic G-Wagen, to a midsize electric sedan and a new small electric crossover… 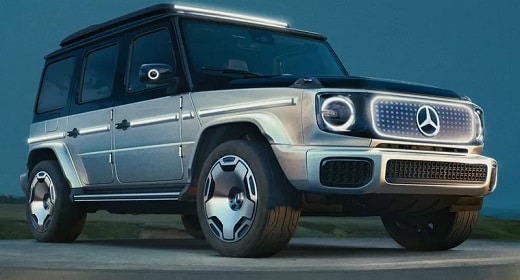 Mercedes-Benz continues its ambitious plans to electrify its lineup and this week it’s showing off five new electric vehicles at the Munich Motor Show IAA Mobility 2021 in Munich, Germany. All five electric cars are positioned under the automaker’s EQ-sub-brand, which is used for all of its fully electric vehicles. The new EVs range from an electric version of the iconic G-Wagen, to a midsize electric sedan and a new small electric crossover.

The new EVs are part of the automaker’s plans to go fully electric in select markets by 2030. “The EV shift is picking up speed – especially in the luxury segment, where Mercedes-Benz belongs. The tipping point is getting closer and we will be ready as markets switch to electric-only by the end of this decade,” said Ola Källenius, CEO of Daimler AG and Mercedes-Benz AG in a statement. “This step marks a profound reallocation of capital. By managing this faster transformation while safeguarding our profitability targets, we will ensure the enduring success of Mercedes-Benz. Thanks to our highly qualified and motivated workforce, I am convinced that we will be successful in this exciting new era.” 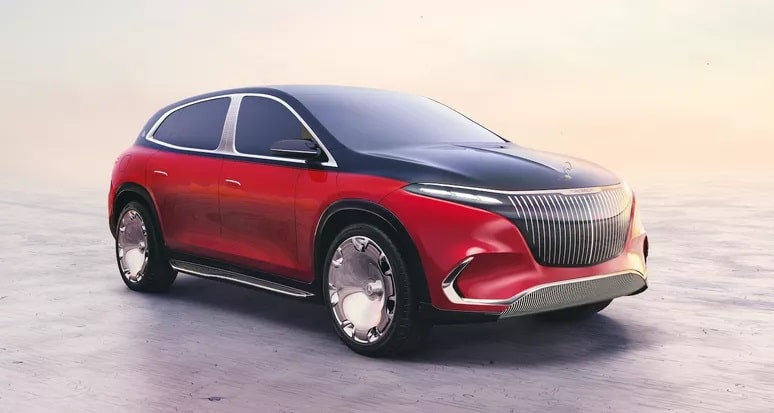 The Mercedes-Benz G-Class aka G-Wagen is one of the most iconic SUVs on the road, but no one would ever buy it for its fuel efficiency. That will soon change when Mercedes-Benz releases a new electric G-Class, which is being previewed by the EQG concept. The concept is a near-production version of the electric EQG, which looks nearly identical to the standard G-Class.

The biggest update on the outside is the updated front fascia with a unique grille. At the rear, the spare tire cover has been replaced by a compartment that can store the charging plug. For buyers that are worried that the EQG won’t be as rugged as the standard G-Class, the good news is that it still retains its body-on-frame chassis and four-wheel drive. Mercedes did not provide any specs about the electric powertrain. We also don’t have a confirmation when the EQG will arrive, but its introduction shouldn’t be too far away, since the concept is so close to the production version. 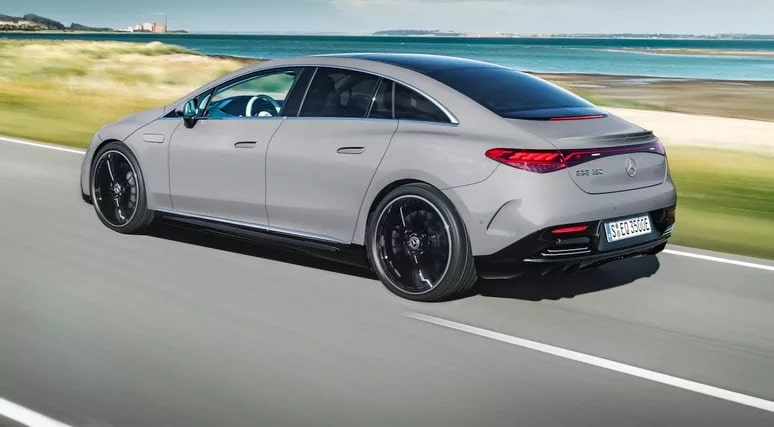 The EQ brand is about to go mainstream with the introduction of the EQE350 electric midsize sedan, which is positioned as an alternative to the E-Class. On the outside, it looks similar to the larger EQS sedan, while its futuristic cabin is a highlight. Inside there’s a Hyperscreen that spans the entire width of the EQ350. The massive screen will even let the front passenger watch a movie while on the road, but it also monitors the driver’s eyes to make sure the driver is keeping their eyes on the road.

The EQE350 is powered by a single 288 horsepower electric motor that powers the rear wheels, while all-wheel-drive versions with a second electric motor on the front axle will come later. The EQE350 has a driving range of up to 410 miles on Europe’s WLTP cycle. For buyers that want a sportier version, Mercedes-Benz has confirmed that an AMG version is in the works. The 2023 EQE350 will arrive sometime next year. 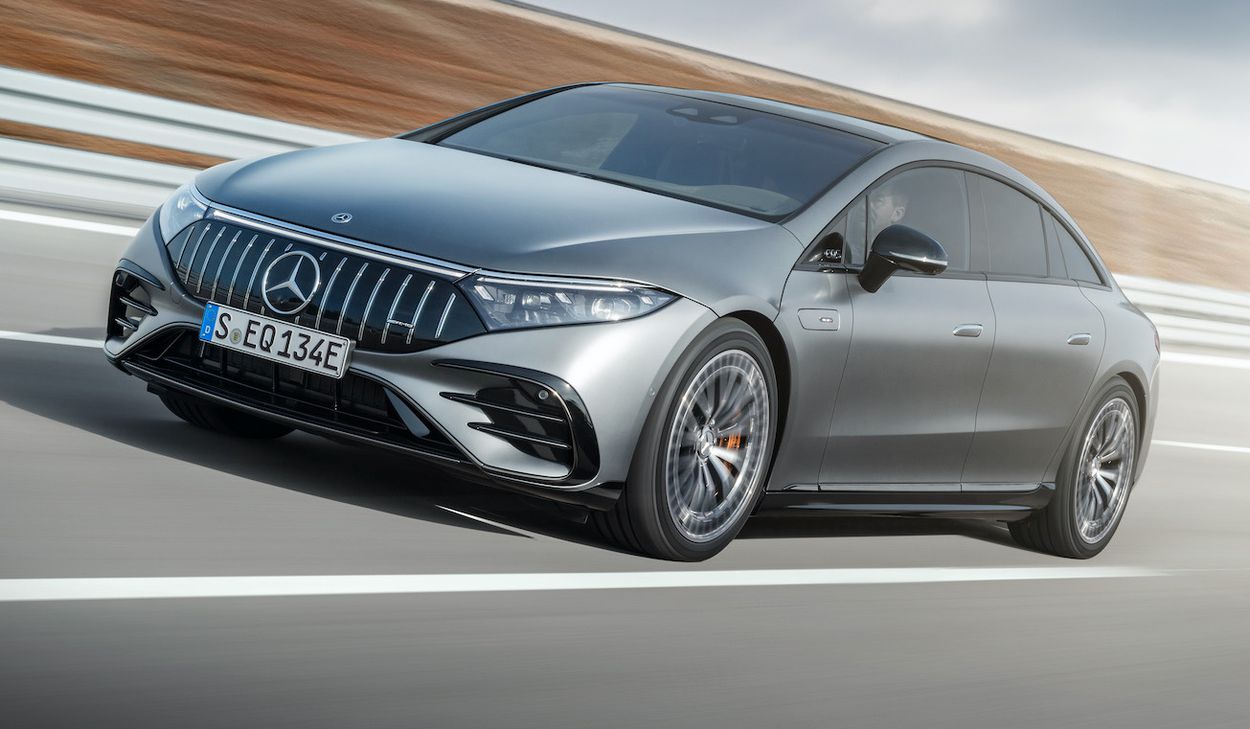 The EQS 53 has a 107.8-kilowatt-hour battery pack, but Mercedes has not announced its driving range. 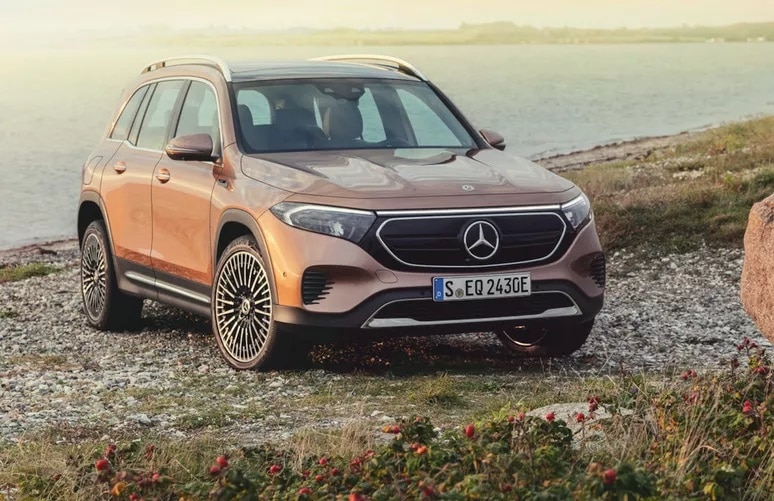 The Mercedes-Benz EQB is set to be one of the most popular models in the EQ lineup, due to its small crossover layout, seven-passenger seating, and reasonable price tag. It’s basically an EV for the whole family. When the EQB arrives in the US next year, it will be offered in two versions: EQB 300 4Matic and EQB 350 4Matic.

The EQB is based on the standard GLB crossover, but gets several unique EQ design details, like its unique front and rear fascias. The EQB 300 will have 225 horsepower and 288 pound-feet of torque, while the EQB 350 will have 288 horsepower and 384 pound-feet. Both versions are powered by a 66.5-kilowatt-hour lithium-ion battery pack, which gives it 260 miles of range on Europe’s less stringent WLTP cycle. In the U.S., we can expect that range to be a bit lower.

“With this strategic step from ‘Electric first’ to ‘Electric only,’ including sustainable production and the CO2-neutral life cycle of our batteries, we are accelerating the transformation to a zero-emission and software-driven future. We want to inspire our customers to switch to electric mobility with convincing products,” said Mercedes-Benz COO Markus Schäfer in a statement.