The Arched Evolution Of The Eyebrow

by Vienna Vernose: Bushy, straight, arched, rounded, and everything in between, those tiny tuffs of hair called eyebrows are actually a strangely purposeful part of the face… 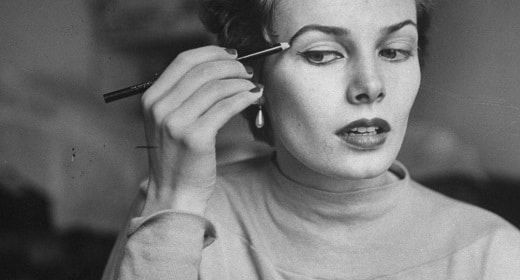 Their main function is preventing sweat and other debris from falling into the eye, but our eyebrows are also essential to our smiles and frowns making the delivery of our expressions a bit more dramatic. Aside from their biological value, our obsession with big, beautiful brows is no new lust, in fact eyebrows have been objects of fixation for thousands of years, reflecting a long history of cultural values, geographies, and periods in time. From wild and thick, to thin and straight, hold onto your tweezers folks, the history of eyebrows is one of many ups and downs.

Eyebrows have held significance as far back as Ancient Egypt, where men and women both wore makeup and partook in cosmetic trends. Thick, bold brows were the style of choice for the purpose of paying homage to the Egyptian god of protection and good health, Horus. The deity is depicted wearing dark eyebrows and eye makeup, so Egyptians followed suit and used black oxide and carbon paint around their eyes. This look was thought to repel flies, ward off infection, and protect the eyes from the sun, while channeling Horus’ protective powers.

Things were quite different in Ancient Rome and Greece where makeup reflected cultural values that focused around a woman’s purity and natural features. In Greece, married women left their eyebrows untouched while unwed women would darken their eyebrows with black incense. The ancient Romans believed unibrows were a sign of intelligence and many women went so far as to draw in a faux unibrow to give the appearance of one.

PORTRAIT OF BAKER TERENTIUS NEO AND HIS WIFE IN FORMAL CLOTHES, 55-79 A.D, POMPEII

During the Tang Dynasty in China (618-907 AD), women typically shaved off their natural eyebrows to allow for easier full-face makeup application. They would then apply a blueish-black pigment made from charred willow and draw creative brow styles with tails that drooped. The Japanese court soon adopted this from the Chinese in the 8th century calling it hikimayu–hiki meaning “pull” and mayu meaning “eyebrows.” Hair held importance for both men and women in the telling of one’s social status. Japanese noblewomen began shaving off their brows and penciling on new ones higher on the forehead in an effort to make it easier to apply Oshiroi, a white powder foundation used during this time.

A GEISHA FROM THE EASTERN CAPITAL, 1825

Elevated brows were all the rage in Elizabethan times where the higher the brow, the higher the social class. Elizabeth I set dozens of trends in fashion and beauty during her reign as queen, but one of the more peculiar trends she popularized was high hairlines as a sign of aristocracy. Women oft plucked their eyebrows thinner to create the illusion of a larger forehead by downplaying the brows and expanding the forehead. Additionally, they would rub walnut oil on the eyebrows in an attempt to thwart hair growth, even performing this beauty practice on children.

CORONATION PORTRAIT OF ELIZABETH I, 1559

While transparent eyebrows had been popular in previous eras, at the start of the 18th century, a dark, full brow became most desired. Over-plucking and the use of toxic lead-based cosmetics led to hair loss making it difficult for women to grow out their eyebrows. As early as 1703, it became custom to trap mice and use their fur to form artificial brows as a solution for a lack of eyebrows. Mice pelts were trimmed into a desired style of eyebrow and stuck to the forehead using an adhesive.

After a few decades of minimal effects on the eyebrow world, film became a widespread form of entertainment in the ’20s and ’30s. The rise of the silver screen also brought the emergence of the movie star, and Hollywood’s biggest celebrities of the time like Clara Bow, Jean Harlow, and Marlene Dietrich began to sway trends in fashion, cosmetics, and of course, eyebrows. These leading ladies popularized the ultra-thin eyebrows by plucking or shaving off the hair, mimicking practices from Elizabethan times and Medieval Asia. Photographer Cecil Beaton once said of Dietrich, “Instead of eyebrows, she has limned butterflies’ antennae on her forehead.” The chic look of the roaring ’20s was penciling on a thin eyebrow with a downward slope creating an intentionally moody look. It was common for women to put Vaseline on their eyebrows to create shine in an effort to draw attention.

The start of World War II in 1939 had a widespread effect on the planet in both big and small ways. War rations impacted beauty and fashion industry trends as women were needed in the workplace and had less time for grooming while men were at war. For this reason, women had less of a beauty routine and prized easy to upkeep styles which put an emphasis on low-maintenance, medium-to-thick eyebrows. Movie stars of this time still held public attention with starlets like Audrey Hepburn, Lauren Bacall, and later, Marilyn Monroe and Elizabeth Taylor influencing trends with their dramatic arched brows. As the decade progressed and the war subsided, eyebrows became more prominent, well-groomed, and often paired with a lustrous cherry red lip. Though eyebrow trends followed Hollywood’s influence, at the same time, Mexican artist Frida Kahlo notably wore her trademark unibrow with pride, and often used her style as a form of creative expression in her work.

The swinging ’60s brought a range of experimental makeup trends to go along with the free-spirited fashion of the time. Italian actress Sophia Loren had the most storied brows of the period as she was known for adopting old traditions of shaving off the eyebrow entirely and penciling it back on in short strokes. Natural makeup was also a common look for women emulating the style of starlets like Lauren Hutton and Farah Fawcett, channeling the hippie look which rejected makeup all-together. However, disco music and burgeoning nightlife made sure fashions were louder than ever. Warhol muse and art scene It girl Edie Sedgwick dabbled in experimental eyebrow looks by blackening her eyebrows with dye to heavily contrast her platinum white hair. Diana Ross emphasized her diva status by creating a thin ’20s era eyebrow, tapping a sense of nostalgic glamour. At this time, eyebrow waxing also became a widespread beauty treatment in salons and at home with kits to maintain eyebrows with ease.

With massive changes in eyebrow trends, the ’80s and ’90s were maybe the most exciting time when it comes to brow history. The bigger the better was the motto for the ’80s where shoulders pads, nails, and hair towered sky-high. Eyebrow trends followed suit with models like Brooke Shields leading the movement with big, beautiful brows. By the end of the decade, fashion trends had exhausted all things over-the-top and suddenly a sense of minimalism pervaded over fashion and beauty which was dubbed “heroin chic.” Along with this, groomed yet natural-looking brows became the preferred look on the runway. From bonafide supermodels like Christy Turlington to fresh faces such as Devon Aoki, eyebrows were left to frame the face without much fuss. By the end of the decade, however, the super thin eyebrow was re-introduced and people began over-plucking their brows and penciling them as thin lines to mimic celebrities like Drew Barrymore and Gwen Stefani. Tons of ’90s icons adopted the skinny brow in reclaiming ’20s-era eyebrow trends.

Turn of the century eyebrows were a continuation of the thin arches that took over the decade before. Eyebrows generally stayed on the skinnier side as trends remained unchanged, however the 2000s were less about penciling in a line-bow, rather showing off a naturally thin wispy rendition of the trend. Aspects of Mexican-American chola culture was often borrowed in creating thin brows with expressive arching as seen on stars like Angelina Jolie and Christina Aguilera. Of course, those with good brows owned them, such as Carine, whose bold eyebrows have remained a fixture of her beauty look even through the periods that preferred the sparse look.

For the rest of us, tweezers were finally put down in the 2010s. People tried to regrow their eyebrows from the damages of over-plucking allowing the full grown brow to finally make a comeback with the help of celebrities like Cara Delevingne and Lily Collins. The center tuffs of the eyebrows were brushed up giving the look of eyebrows set fairly close together. The effects of mistreating our eyebrows in the ’90s resulted in the development of eyebrow treatments, including balms, serums, and microblading to stimulate regrowth. This time also brought the rise of social media and the selfie where front-facing cameras forcefully confronted us with ourselves and makeup became an important way of enhancing the face for photos. What’s better known as the “Instagram eyebrow” or the “HD brow” became popular on social media channels for the purpose of it photographing well in pictures. The defined brow look followed the full-brow trends, but it also explored what prominent eyebrows meant in the digital age and how makeup evolved for an online audience.

Nowadays, eyebrows are something of a secret weapon accessory. Previously a background detail on the face, eyebrows have slowly evolved over centuries to become a definitive feature of one’s style, extending fashion beyond just sartorial dress. Whether bleached, shaved, painted, fluffed, or tinted– nothing is off the table when it comes to eyebrows and customizing your look. Whether it’s today’s halo brows or 17th century eyebrow wigs, history’s ideal brow has no one aesthetic, rather it shifts from thin to thick and back again in a reflection of the world around us.