by Elissaveta M Brandon: It could power up to 100,000 households… 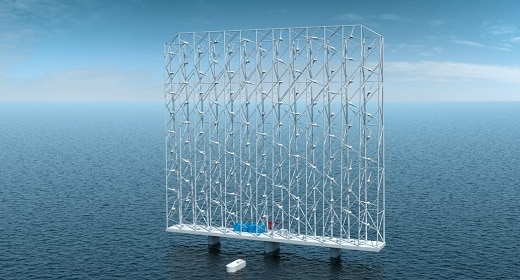 Renewable energy could power the world within the next 30 years, and wind power is one of the cheapest, most efficient ways to get there. Except 80% of the world’s offshore wind blows in deep waters, where it’s difficult to build wind farms. A new design for a radically different kind of wind turbine could begin to change that.

Norwegian company Wind Catching Systems is developing a floating, multi-turbine technology for wind farms that could generate five times the annual energy of the world’s largest, single wind turbine. This increased efficiency is due to an innovative design that reinvents the way wind farms look and perform.

Unlike traditional wind turbines, which consist of one pole and three gargantuan blades, the so-called Wind Catcher is articulated in a square grid with over 100 small blades. At 1,000 feet high, the system is over three times as tall as an average wind turbine, and it stands on a floating platform that’s anchored to the ocean floor. The company is planning to build a prototype next year. If it succeeds, the Wind Catcher could revolutionize the way we harness wind power.

“Traditional wind farms are based on the old Dutch windmills,” says Ole Heggheim, CEO of Wind Catching Systems. These wind farms work well on land, but “why is it that when you have something that works on land, you should do the same thing on water?”

Offshore wind farms have been in vogue; 162 of them are already up and running, with 26 more to come, mostly in China and the U.K. The problem is that each turbine has to be driven into the seabed, so it can’t be installed in waters deeper than 200 feet. As a result, wind farms can’t be built farther than about 20 miles away from shore, which limits their performance potential since the winds are stronger farther out into the ocean.

This is where floating wind farms come into play. The world’s first floating wind farm, Hywind, opened in 2017, almost 25 miles off the coast of Aberdeen in Scotland. The wind farm counts six floating wind turbines that are slotted in a buoyant cylinder  filled with heavy ballast to make it float vertically. Because they’re only tethered to the seabed with thick mooring lines, they can operate in waters more than 3,000 feet deep.

Hywind is powering around 36,000 British homes, and it has already broken U.K. records for energy output. Wind Catching Systems launched the same year Hywind opened. It claims that one unit could power up between 80,000 and 100,000 European households. In ideal conditions, where the wind is at its strongest, one wind catcher unit could produce up to 400 gigawatt-hours of energy. By comparison, the largest, most powerful wind turbine on the market right now produces up to 80 gigawatt-hours.

There are several reasons for this substantial difference. First, the Wind Catcher is taller—approaching the height of the Eiffel Tower—which exposes the rotor blades to higher wind speeds. Second, smaller blades perform better. Heggheim explains that traditional turbines are 120 feet long and usually max out at a certain wind speed. By comparison, the Wind Catcher’s blades are 50 feet long and can perform more rotations per minute, therefore generating more energy.And because the blades are smaller, the whole system is easier to manufacture, build, and maintain. Heggheim says it has a design lifespan of 50 years, which is twice as much as traditional wind turbines, and when some parts need to be replaced (or during annual inspections), an integrated elevator system will offer easy maintenance. “If you have one single turbine and you need to change the blade, you have to stop the whole operation,” says Ronny Karlsen, the company’s CFO. “We have 126 individual turbines, so if we need to change the blade, we can stop one turbine.”

When the system reaches the end of its life, much of it can be recycled. After the first significant wave of wind power in the 1990s, many traditional wind turbines have reached their design lifespan; blades the size of a Boeing 747 wing are piling up in landfills. Not only are the Wind Catcher blades smaller, but they’re also made of aluminum, which, unlike the fiberglass used for larger turbines, is entirely recyclable. “You melt it down and produce new ones,” says Heggheim.

A prototype will likely be built in the North Sea (in Norway or the U.K.). After that, the company is looking at California and Japan. “Those have good wind resources near the shore,” says Karlsen, “and the governments are supportive and already starting to award acreage for developments.” And for those wondering about the dangers this might pose to birds, Heggheim says the structure will be kitted out with bird radars that send out short pulses of signal to help prevent collisions with migrating birds. “These units will be so far offshore,” he says, “so birdlife along the coast should not be endangered.”