Are You Coming from Freedom or Fear? Donna Quesada

by Donna Quesada: I have written before about the inspirational message that has helped me through many challenging times… 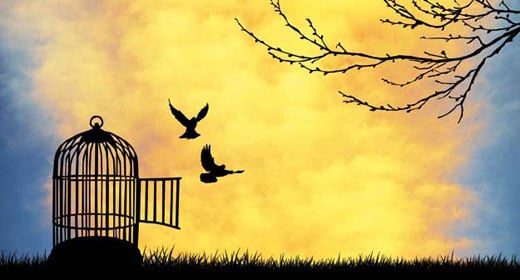 “What’s around the bend?” I adopted this phrase when I was watching a lot of Abraham Hicks videos on YouTube, during a particularly stressful period of my life. I have always found it to be a vivid reminder that there’s something exciting coming… so take “this” with a grain of salt.

But Esther hicks also offers this: “Fun now… Doesn’t matter.” Meaning, we’re having so much fun right now, so, why ruin it because we’re afraid to lose it? The mind gets stuck on the idea of What if it’s not like this forever? We especially do this in relationships, fretting when something seems “off.” We worry, will this person love me forever?… Will it be like this forever? Esther says it’s a bit like fretting over the ice cream cone that we now hold in our hands—taking only one lick, so that it will last forever… so that it never goes away. Saying, “please don’t melt.”But of course, this is absurd. The only option is to enjoy it now.

Don’t these two ideas contradict? “What’s around the bend?” and “Fun now… Doesn’t matter”? On the one hand, she’s reminding us of the excitement that’s always in the works, which seems to be a future thought, and on the other, she’s encouraging us to stay present and enjoy the here and now, a message we’ve all heard time and time again.

Firstly, as I have clarified in my previous article on the subject, it’s not necessarily a future thought, but rather a way to bring a sense of playfulness into this moment, NOW. We’re simply playing with possibility and injecting a little eagerness into the colors of our emotional palette. It makes life less dull. The very idea of potential adds sparkle to this moment, the way a dash of pepper brings the existing flavor of the sauce to life.

And so, with that said, there’s no contradiction by way of logic.

But there’s a deeper way of looking at it… deeper than ordinary logic. It’s only a contradiction if you are, and I will stay with Esther‘s language here… “outside of the vortex.” Or, in other words, if you’re coming from a place of fear, rather than a place of freedom and fun.

In the plainest language, if you’re in a place of worry and anxiety about losing what you fear you might lose, then yes, there’s a conflict.

We get fixated on the long term and feel afraid of being without. We’re in a mentality of lack, rather than abundance. We think there’s only one pie in the whole universe and we better hold onto our slice. We think we need to protect what we have. That’s where the conflict lies: We are, then, not excited about anything, but rather, afraid of everything. Which, ironically, makes it impossible to be fully here, as long as we are mentally sabotaging ourselves.

But what if we could bake new pies all the time and eat ourselves silly?

If you are in the vortex, in other words, feeling connected to that spirit of abundance and the power to create and the excitement of more… if you’re feeling excited about what you’re enjoying right now and you’re enjoying this ice cream cone, but also excited about the ice cream cone that you can have tomorrow… then there’s no contradiction! There’s no conflict, simply because you’re excited.

You’re enjoying this and at the same time, excited about what’s next… unconcerned about whether or not it comes with a guarantee.

Or, to use another analogy, you’re a surfer and you’re enjoying this wave… and in order to stay balanced, you have to stay present, and when you’re present, you’re having as much fun as you could possibly have because you’re in a state of total non-distraction. You have to be, otherwise you’d fall immediately! You are totally right now. You’re surfing this bad-ass wave, and there’s never been another wave like it, and it’s a hell of a good ride, and a hell of a good time. But you also know that there will be another one. In fact, there will be one wave right after another. All day. Every day. The waves will never stop. Ever. And so, both things are true at the same time. You are enjoying this wave, and you know, without even having to think about it… you know in your cells with absolute assuredness that there will be more. And so, there is nothing to fret. You are absolutely in “the vortex.” You are excited. And you are also excited about what’s to come. There is no contradiction.

I love this and I love what’s to come and there will be more… there will ALWAYS be more.