by Jessica Baron: Immersing our bodies in cold temps may help build our tolerance for stress and possibly even long-term anxiety… 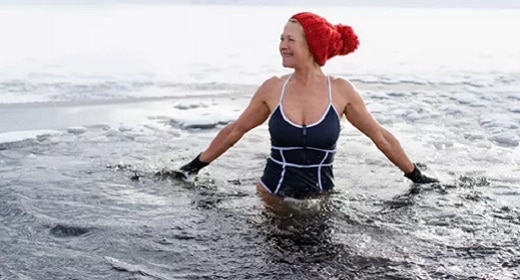 These days, if you ask people whether or not they feel some kind of stress they’re liable to laugh. Of course we’re stressed!

Small doses of acute stress (like deadlines) can actually be good for us, but chronic stress can do serious harm to your emotional and even long-term physical health. And while chronic stress may require a doctor’s intervention rather than DIY remedies, there are plenty of things you can try on your own to help reduce your reactions to stress, including an ancient practice that’s making a comeback in wellness circles—cryotherapy.

These days, cryotherapy—which simply means “cold therapy”—can mean a lot of things. And it typically involves water and air much colder than humans could create before the days of refrigeration. Some of the most popular cryotherapy treatments are:

[Read: “The Benefits of Taking the Plunge.”]

This intense cold therapy probably sounds unpleasant, at best, to a lot of people. That’s fair. But as someone who loves the cold and has tried every cryotherapy treatment on the spa menu, I’d encourage anyone interested to keep an open mind. At the same time, there is not sufficient evidence for claims made by the industry that it can cure illness or aid in weight loss.

Just like any wellness intervention, there are plenty of people willing to throw the “pseudoscience” label at cryotherapy. And in some sense, that’s accurate. People who promote cryotherapy devices often try too hard to make it sound like there’s ample evidence for its success as a treatment, and they end up making unsubstantiated claims that sound scientific.

But here’s the thing: while anecdotal experience shouldn’t be used to treat disease, in cases where it does no harm, it can be worth a try. Even if a positive outcome is a result of bias or a placebo effect on your part, it sometimes doesn’t matter why something works.

And yet it’s important to note that extreme cold can reduce blood flow and nerve activity in the treated area—which is why it can often reduce pain and inflammation—and those effects can be harmful to people who have cardiovascular issues. Those who are pregnant or suffer from Raynaud’s syndrome, diabetes, hypertension, and kidney, liver, and blood disorders should skip experiments with extreme cold. In fact, it’s a good idea to talk to your doctor about anything more intense than a short dip in cold water. And cryotherapy shouldn’t be used in place of medical treatment.

Researchers have suggested that exposure to cold can provoke a low-level stress response from the immune system if done regularly. This may help build up resilience, so when your body is actually under attack from an illness, it may respond better. But we should also keep in mind that cold therapy is time-limited and deliberate. Sitting in a cold office all day suffering and shivering is not the same thing. Nor is overexposing yourself to cold and risking hypothermia or frostbite.

Let’s be clear, you’re not setting out to become “Iceman” Wim Hof who can swim for 200 meters under iced-over water. You’re simply trying to induce a mild stress response in your body that you can then focus on and try to control with concentration and deep breathing.

[Read: “The One Minute, Icy Cold Path of Awakening: An Interview With Wim Hof.”]

But research on Hof has given us some insight into how cold exposure can have a positive effect on the body when done carefully and deliberately. It appears to trigger a response in a part of the brain called the periaqueductal gray (PAG), which plays a role in your body’s response to threatening stimuli.

Activation of the PAG can help inhibit feelings of pain and its accompanying stress. Increasing our tolerance to cold with focused meditation and breathing exercises can help us create the expectation of a positive outcome. It’s mind over matter, really. We can convince ourselves that the cold is invigorating and we can do it to the point where we make it true physiologically. The PAG can release natural pain-suppressing opioids or cannabinoids as well as affect our levels of serotonin and dopamine. So, by using cold to get into this meditative state, we create our own positive feedback loop.

Another cool thing about cold therapy is that it can help release endorphins as well as decrease the stress-inducing chemical cortisol. So, while the thought of turning the shower water all the way down might give you the figurative chills, there’s a chance the brain’s response plus the boost in blood flow can help reduce anxiety long-term. (At the very least it’s going to take your mind off of your problems for a moment.)

Neuroscientists Vaibhav Diwadkar and Otto Muzik of Wayne State University study the brain’s response to cold and believe that their cryotherapy research “is beginning to suggest these kinds of ‘superpowers’ may indeed result from systematically practicing techniques that modify one’s brain or body. These modifications may be relevant for behavioral and mental health, and can potentially be harnessed by anyone.”

Dipping a Toe Into Cryotherapy for Stress

Whether you schedule a cryotherapy treatment at a spa or try a cold-water shower or bath at home, you have control. You don’t have to be good at it right away. You may even jump out after a second or two before you learn to control your body’s stress response. It’s up to you how much you want to be challenged. Practicing breathwork and meditating on overcoming fears and stressors can help you prepare for that shock of cold as well as give you a sense of accomplishment after you’ve finished.

For me, and for many, cryotherapy is a luxury that’s unlikely to have a negative effect on my health. And because I’ve tried it and believe it boosts my energy and makes me more resilient to stress, it’s likely to continue to have a similar effect. It may be all in my cold submerged head, and I’m ok with that.