by Elizabeth Howell: The observatory must complete about 50 major deployments after liftoff… 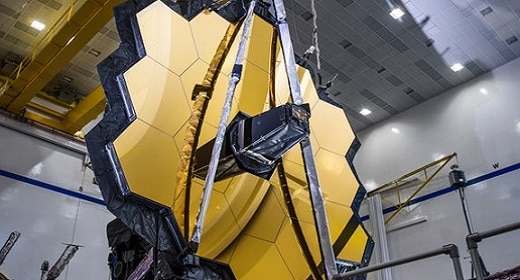 NASA’s newest space telescope will face 29 “harrowing” days after launch as it makes its way to a deep-space destination nearly 1 million miles (1.6 million km) from Earth, the agency says in a new YouTube video.

The video, called “29 Days on the Edge,” was released Monday (Oct. 18). It focuses on the journey and 50 expected deployments the James Webb Space Telescope will undergo after its expected launch on Dec. 18.

The telescope has been much delayed over the years due to technology challenges, the coronavirus pandemic and other issues. And there will be significant hurdles to overcome after launch as well.

“We have 300 single-point failure items, and they all have to work right. When you’re a million miles from the Earth, you can’t send someone to fix it,” Webb program director Greg Robinson says in the video.

After Webb gets through that gauntlet, it will begin making observations that could transform our understanding of the cosmos. Scientists will use the telescope to learn more about the universe’s early days and investigate the atmospheres and nature of distant exoplanets, among other tasks, NASA officials have said.

The new nine-minute video focuses on the many technological obstacles that Webb must overcome. For example, its 21.3-foot (6.5-meter) mirror is built to “fold like origami,” as the video notes, because the mirror must fit inside the payload fairing of its Arianespace Ariane 5 rocket during launch. The unfolding will need to happen in space, far from direct human assistance.

The Ariane 5 must do its job on Dec. 18, of course. And Webb’s own thrusters must work properly as well — particularly about 12 hours after liftoff, when they’re expected to fire up and send Webb toward its deep-space destination. As Webb makes that journey, it will be pushed around by the solar wind, or the constant stream of particles coming from the sun, so the telescope will unfold a “trim tab” for stability.

One of the biggest things Webb will have to unfold is a complex, tennis court-sized sunshield array, which has 140 release mechanisms, 70 hinge assemblies, 400 pulleys, 90 cables and 8 deployment motors, bearing springs and gears, NASA says in the video. All of these items will need to work correctly to get the sunshield unfolded so Webb can do its science work.

But NASA maintains that its years of training and project management will assist Webb with this complex set of operations. “Those two weeks after launch will be like our Super Bowl, World Cup — you pick the analogy,” says Amy Lo, Webb deputy director for vehicle engineering, in the video. “Years of training comes down to these moments.”