About 70% of fresh produce sold in the US has pesticide residues on it even after it is washed, 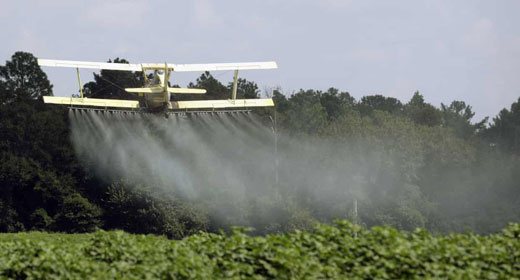 according to a health advocacy group.

According to the Environmental Working Group’s annual analysis of US Department of Agriculture data, strawberries, spinach and kale are among the most pesticide-heavy produce, while avocados, sweetcorn and pineapples had the lowest level of residues.

More than 92% of kale tested contained two or more pesticide residues, according to the analysis, and a single sample of conventionally farmed kale could contain up to 18 different pesticides.

Dacthal – the most common pesticide found, which was detected in nearly 60% of kale samples, is banned in Europe and classified as a possible human carcinogen in the US.

“We definitely acknowledge and support that everybody should be eating healthy fruits and vegetables as part of their diet regardless of if they’re conventional or organic,” said Alexis Temkin, a toxicologist working with the EWG.

“But what we try to highlight with the Shopper’s Guide to Produce is building on a body of evidence that shows mixtures of pesticides can have adverse effects.”

Other foods on the group’s “dirty dozen” list include grapes, cherries, apples, tomatoes and potatoes. In contrast, its “clean 15” list includes avocados, onions and cauliflower.

Leonardo Trasande, an environmental medicine specialist at the New York University medical school, called the EWG report “widely respected” and said it can inform shoppers who want to buy some organic fruits and vegetables, but would like to know which ones they could prioritize.

Despite a growing body of research, scientists say it is difficult to pinpoint how many pesticides people are exposed to in their daily lives, and in what quantity. And it is also hard to say how those chemicals in combination affect the body.

One recent French study found that people eating organic foods were at a significantly lower risk of developing cancer, although it suggested that if those findings were confirmed, the underlying factors would require more research. Nutritional experts at Harvard University cautioned that that study did not analyze residue levels in participants’ bodies to confirm exposure levels.

A separate Harvard study found that for women undergoing fertility treatment, those who ate more high-pesticide fruits and vegetables were less likely to have a live birth.

The CDC explains that “a wide range of health effects, acute and chronic, are associated with exposures to some pesticides,” including nervous system impacts, skin and eye irritation, cancer and endocrine disorders.

“The health risks from pesticide exposure depend on the toxicity of the pesticides, the amount a person is exposed to, and the duration and the route of exposure,” the CDC says, noting evidence suggests children are at higher risk.

The Environmental Protection Agency sets rules for how pesticides are used, but those rules do not necessarily prevent cumulative exposure in a person’s diet.

The agency is fighting a court order to ban chlorpyrifos, a pesticide that is associated with development disabilities in children.

EPA has also scaled back what types of exposure it will consider when evaluating human health risks. And President Trump has appointed a former executive from the industry lobbying group the American Chemistry Council, Nancy Beck, as the head of its toxic chemical unit.