Repeat After You: 3 Unexpected Benefits Of Chanting

by Jessica Baron: Chanting a mantra can counter dementia, help you sleep, and more… 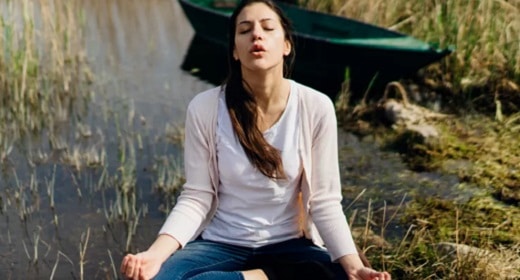 I’ve recently started both yoga and meditation teacher training and each of these courses has a component that involves chanting—both out loud and silently. In all of my years of taking classes, it was never something I felt comfortable doing with other people around. I felt self-conscious, to say the least. But in picking up the practice as part of these trainings, I noticed almost immediately that it made my day feel different.

Yes, I felt silly doing it for about a week, and no, I still don’t do it in front of other people, but I have every intention of integrating it into my practices, especially after delving into some of the research on how chanting can be beneficial to the brain and overall wellness.

What the Science Shows

I’ll admit, I was frustrated to see the kinds of articles that came up when I first started investigating the science behind chanting., Despite there being no such thing as scientific proof, claims that “scientists have proved” are everywhere in reference to just about everything. But that’s not what scientists do.

Scientists gather evidence, and lots of it. In fact, their real goal is to disprove a hypothesis. If a hypothesis has enough evidence and it can’t be disproved, then it becomes a theory. The only finality in science comes when a theory is disproved and then disregarded. So, anyone making claims that fMRIs and other fancy-sounding equipment have proved that chanting will change your brain is dealing in what we call pseudoscience.

But there is a remarkable amount of intriguing evidence showing that chanting does activate parts of the brain. Most scientists have studied religious chanting, but it seems to be the case that if you are devoted to your mantra (regardless of your spiritual beliefs), then you could reap the benefits of chanting it.

In other words, if you’re just miming along in yoga class because that’s what everyone else is doing, that probably won’t have an effect (but it doesn’t seem to hurt either!).

Let’s be blunt, you may not need to know the physiological details to give chanting a try. You may find mantras like “Om,” or “Amen” beautiful enough to try chanting out loud or silently for a few minutes a day. If you’re not self-conscious about it and let the sounds do their work while bringing your full attention to them, you may feel more relaxed afterward. It might even give you the same sense of clarity that a longer silent meditation would give you. In that case, just do it! Your subjective experience matters here.

For those more curious about the details or who want to know how these sounds might lead to real, physiological change, there are multiple studies from around the world that have sought to measure brain activity during chanting. Researchers have used non-invasive methods including electrophysiological and neuroimaging methods such as EEGs and fMRIs to see which regions of the brain are activated by chanting. They’ve also looked at heart rate variation during chanting as well, since it’s closely correlated with stress responses.

Nearly all of the studies found that chanting improved mood and reduced stress levels in subjects who were devoted to the practice (that is, they developed a regular practice and chose a mantra that meant something to them). But there were three additional benefits to chanting that were unexpected and interesting.

1. Chanting can help you sleep. Researchers have found that chanting has different effects on the brain than either regular meditation or prayer.

A study of highly trained meditators showed that chanting “Amitābha Buddha” while contemplating the vow of compassion not only had a positive effect on heart rate variation (which can affect mood), but it resulted in fewer intrusive thoughts and less mind-wandering. It was also shown to increase delta-band power, which is linked to sleep disorders, and specifically to the deepest and most restorative sleep.

2. Chanting makes you more altruistic. A 2016 study found that the simple repetition of the word “OM” for 10 minutes improved attention, mood, and even contributed to feelings of altruism, or selfless concern for others.

Interestingly, the researchers found that this was the case for both silent and vocal chanting, although silent chanting was more beneficial for experienced participants. So, if you’re new to chanting, you’re more likely to benefit if you do it out loud.

3. Chanting can help ward off dementia. Various forms of chanting have been shown to have a beneficial effect on cerebral blood flow. When this blood is impaired, it can lead to vascular dementia, which includes problems with reasoning, planning, judgment, and memory.

One study in particular found that practicing Kirtan Kriya, in which one chants “Saa Taa Naa Maa” along with the use of specific mudras, or finger movements, can help prevent and reverse cognitive decline associated with dementia and Alzheimer’s after just 10-12 minutes of regular practice.

The study of the relationship between the brain and spiritual practices such as chanting is referred to as neurotheology. It’s a field that continues to grow as evidence of the benefits of practices like chanting piles up. And the good news is that you need not be an adherent to a specific religion or spiritual tradition to reap the benefits. Chanting and mantra meditation can be taught, and as long as they’re taken seriously and done with intent, you can start to improve your brain health in as little as two months.

The idea of spiritual fitness is a lot like physical fitness. You need to develop a regimen and pay close attention to how your body responds in order to make it work for you. But when you build a routine, the beneficial effects on your brain make it worth the effort. Not only does it help you sleep, improve your cognitive health, and make you more altruistic, but chanting can help improve your blood pressure and mood, even reducing symptoms of depression, anxiety, and overall stress.

What do you have to lose?