by Eva Clay: As a fiercely independent, self-proclaimed “alpha woman”, it was in the darkest surge of the pandemic that I turned 50… 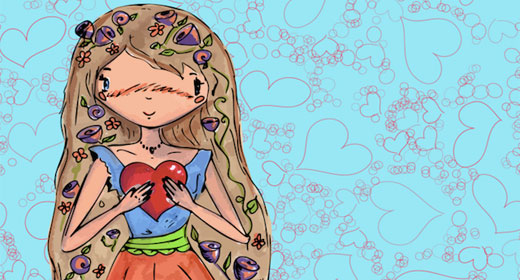 I, like many women, had been dreading that number for years, as if it were a line I would cross into oblivion, where I no longer mattered. All the things I loved would be out of my grasp from then on. Sex, love, attention, vitality, success, joy, all would vanish at the big 5-0. I would plummet down a deep well of irrelevance for the rest of my life. Pleasure would be permanently deleted.

I was also in the throes of perimenopause. I was depressed, lonely, and 30 pounds overweight. My self-worth was at an all-time low. If you’ve been through it you *may* have some idea of what I mean.

Between the isolation of being single during a pandemic, turning 50, and the afflictions of perimenopause at a moment when the world was in collective catastrophe, my soul was aching for an escape.

I needed to feel alive again. To sink into a blue ocean and float. And cry.

So on impulse, I took an extended trip to the Big Island of Hawaii.

I had been there about a month when one day, after a long day of working, I needed air. So I looked in my handy guide book and found the perfect stroll – an interpretive nature walk in a cloud forest. 1 mile in total, about a 15 minute walk.

When I arrived I saw people walking dogs, out for a casual leg stretch, walking alone with no packs or gear, so I left mine behind and opted for just my phone.

It was a *gorgeous* trail, through a dense and misty jungle. I strode in deep appreciation of Hawaii’s splendor, in a steady sure-footed pace.

But it went on a lot longer than 15 minutes. Where was the turn-around spot? And the guidebook had said that signs would guide me => But there were no signs.

With no cell signal, my GPS was useless, so I kept going, figuring the loop would deliver me back to the parking lot.

The late afternoon light was waning, I knew I had only about an hour of daylight. At least I had a flashlight on my phone – just in case.

On and on the trail went, and I felt an uneasiness rise in my chest. My heart began to flutter. This just wasn’t right.

My best intuition, typically sharp with navigation, told me to stay on the trail. It began to wind UP the steepest grade I’ve ever climbed. Aside – I later learned I was walking up the side of a volcano.

After an hour of straight uphill, over sharp rocks and vines, sweating and aching and dehydrated, I knew I was in trouble. I fell to my knees and prayed to Pele, the fiery patron goddess of the island. That b*tch has always dealt me in the fiercest way. I called on all my angels, guides and ancestors for help.

It was now completely dark, the blackest night I’ve ever been in, with the clouds obscuring any moon or star light.

I used my phone light to hobble up the treacherous mountain, at times on my hands and knees. It had to go *somewhere*. Another hour passed.

My phone was draining, I had just 10% battery left.

I was completely, utterly lost.

And then my light went out.

I could not even see my hand in front of my face. How was I going to get out of this jungle?

My heart was drumming inside my chest, my mouth went dry, and hypervigilance set in. Every possible threat ran through my mind. Are there predators? Snakes? Centipedes? What about crime? Or weather? I decided my greatest risk was of injury if I kept going.

So I sat down in the mud. At worst, I would spend the night here.

In the darkness, the jungle was alive with bird songs, insects, and mysterious rustles. Even the silence was alive. I was at once immensely grateful for my years of personal work – because I used *all* of it to attune to my surroundings.

I used my breath to calm my system.

And I became the jungle.

Who I was, at the level of my identity, broke into pieces. It had to. I had to become someone new in order to survive this experience. I felt the old Eva dissolve into particles of vibrant, multi-colored light.

I felt my spine grow taller. My chest lifted, courage pooled into my heart, and I started to sing.

My voice leapt out of my throat as if I weren’t the one singing. It rippled out in some unknown language. I sang songs of reverence to the jungle and I felt Her singing back through me. Not in words, but in sounds I had never heard before.

I don’t know how much time passed in this liminal state – singing and merged with the jungle – but suddenly a floodlight appeared on the path ahead. Maybe a car!? A flashlight!? I managed to crawl up the path, hooting and hollering for help, and it was….the MOON. The bright, full Moon. The mist parted to reveal Her in a blinding glory.

The moon lit up the jungle enough so that I could scramble to a clearing – and my phone had ONE tiny bar of signal!

I was at a choice point.

One part of me said,

“Great! Now there’s light – now you can figure out how to get back!”

The latter sounded like my mom’s voice, and tears spilled out of my eyes, because for 3 years now she had been gone.

Still doubting, I asked God if I am really that important to cause all the trouble of getting rescued.

I placed a reluctant, trembling call to 911, and immediately after, the clouds closed over the moon and that inky blackness returned.

The clouds had cleared just long enough for me to place that call for help.

An hour later a helicopter arrived, thundering over the mountain with a searchlight, and for a long time that light scoured the jungle looking for me, and no matter how loudly I shouted it did not find me. The jungle was too dense. It didn’t see me. I panicked. Riddled with adrenaline and exhaustion, my voice went out and I gave up.

I sat in silence and reached again for the energetics I had studied. I broadcasted my location through the quantum field, proclaiming. “I AM HERE, and I MATTER”.

Another 30 minutes passed when a military-issue ATV came roaring up the mountain. I managed to wave my arms. When it reached me, a *very* strong man in fatigues jumped off, knelt by my side, and said, “Are you ok?”.

This time, it was MY answer that came swiftly.

He smiled, and lifted me onto the back of his ATV. I wrapped my arms around his waist, placed my head against his back, and held on for my dear and precious life. I could feel his heart. I let myself be carried by his enormous strength. Throughout the long trek back to safety, he assured me: “I’ve got you.”

When we emerged from the jungle there were fire trucks, paramedics, a stretcher, and about 20 military personnel ready to care for me. I thanked them all for their service.

My rescuer never left my side, he escorted me all the way home.

While I wouldn’t wish this type of emergency on anyone, Hawaii had her way with me.

The worthless me gave way to the worthy me, and now I will never, ever let her go.

I look back and see how silly it was to believe that for women – the good life ends at 50. Or with menopause. Yet I know I am not alone in this conditioning.

Just like that dark jungle, I, too, am alive with feracious mysteries.

Just like the path that diverged, I , too, diverge from the narrative of women aging.

Mahalo Nui Loa Pele, thank you for reminding me: