12 Texts To Send Your Partner After A Big Fight

by Matt Christensen: 12 Texts to Send Your Partner After a Big Fight… 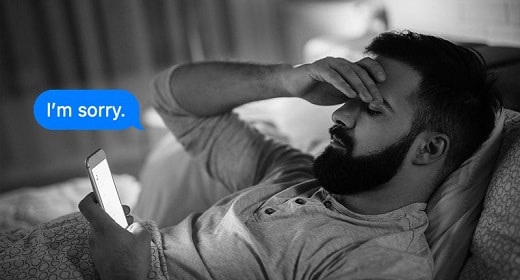 So, you had a big fight. One thing led to another. Voices were raised and sharp words exchanged. Whatever happened, happened. You can’t go back now. What you can do, however, is cool off, consider the events that took place, and get to work on repairing the rift between you and your partner. Given what took place, you may or may not think an apology is warranted. Fine. But opening up the lines of communication is important. Sometimes, the best thing you can do after a fight is send a text. The right text, that is.

Now, let’s first get one thing straight: Whether you’re issuing an apology or simply expressing regret for how an argument deteriorated, in-person is always the best route. A text can seem like a cop out, and make matters worse. However, there are times when it makes sense. If you fight right before you leave for work, say, or are in the midst of cooling off and want to let your partner know that, no matter what took place, you promise to work everything out, a text is worthwhile. It can also help simmer things down before re-engaging.

“Disagreements and arguments are inevitable parts of almost every relationship,” says Dr. Beth Pausic, psychologist and Director of Behavioral Health at of Hims & Hers. “While stressful, it can sometimes be even more challenging deciding on what to do next. Who will break the ice and make the first move toward a resolution?”

A text, per Dr. Pausic, is often a low-stakes solution to that question. The big thing to remember is that the text needs to precede an in-person conversation. So, whether you want to apologize, explain that you’ll get through whatever happened together, or send a tactful message of regret for taking things too far, here are some examples to keep in mind.

1.  “I want to figure this out, and I hope we can find a way to do it while being kind to each other.”

After a big argument you may be tempted to write something like, “I don’t want to fight…” But inserting a word like “fight” into the conversation, even with the best intentions, can create volatility, explains Dr. Mimi Winsberg, Chief Medical Officer and Co-Founder of Brightside, and the author of Speaking in Thumbs: A Psychiatrist Decodes Your Relationship Texts So You Don’t Have To. She says that it may even come off as a slight threat, as it implies that the outcome is uncertain if it can’t be figured out without disagreement or emotion. Instead, aim to suggest working things out rationally and peacefully. “In doing so, you emphasize kindness and still leave room for respectful disagreement,” she says.

2. “I’d appreciate a chance to explain myself.”

The only perspective you can claim to understand is your own. So don’t presume to know where your partner or spouse is coming from by jumping to conclusions. Instead, tell them your plan for moving forward by creating clarity. “This phrase shows that the relationship is important to you,” says Dr. Winsberg. “By asking for a chance to explain yourself, you’re speaking to what you can offer the situation at that moment.” And if your partner is ready to listen, thank them for the opportunity.

“It’s reassuring to the other person to hear that you’re interested in revisiting the disagreement after you’ve both had a chance to process it,” explains Dr. Winsberg. “If you yourself need space and time, be kind in asking for it. It can be helpful to say something like, ‘We can pick this back up [tomorrow, this weekend, etc.]’.” If your partner specifically requests breathing room, or even if you’re sensing that they need time to warm up, you can offer yourself in a way that’s flexible and sincere.

Let’s say you return to your neutral corners and think that maybe it was you who screwed up. Fair enough. Texting is a great way to admit your mistake and take responsibility. “If you’re in the wrong and realize it, take responsibility and set things up for a sincere, in-person apology,” says Dr. Pausic. “This type of reaction acknowledges that what you did  — or failed to do — was wrong and hurtful, and that you’d like to talk, rather than argue.” So swallow that pride, and let your partner read the truth.

6. “Who I was during that fight isn’t the person I want to be with you.”

Bruce Banner and The Hulk. Dr. Jekyll and Mr. Hyde. Norman Bates and his mother. When the tension ramps up, even the most mild-mannered of partners and spouses can turn into a fuming monster incapable of reason, logic, or rational thought. If that sounds like you, acknowledge and then atone for your troubling transformation. “Be honest in taking responsibility for your actions,” says Dr. Pausic. “You acted in a way that wasn’t okay. Let your partner know that you realize you crossed the line and want to do better.”

Sometimes we revisit arguments from the outside looking in and can’t believe how silly they were. Or, we’ll remember that there was an argument, but not have the faintest idea what it was about. In the heat of the moment, though, we can both agree that we’d rather be almost anywhere else. “Acknowledge what the argument was really like,” says Dr. Pausic. “Then let your partner know you let the moment get the better of you.” You can apologize for your part in the madness, while finding common ground about how you both felt during the argument.

9. “I promise to cook dinner every night this week.”

Maybe not those exact words, if you happen to be a crappy cook. But, if you were the one who took things too far, there’s no shame in offering a bribe to get back on speaking terms. “Throwing out an offer to make amends is a nice way to open up the conversation,” says Dr. Pausic. “It can be a gesture like offering to help with specific day-to-day chores, or something even bigger. The key is to show you’re willing to come to terms, and possibly lighten the mood in the process.”

Making sure your partner knows that you’re invested in the relationship is essential to maintaining its health. Let the other person know that they are important to you by describing how much it sucks when you’re not on the same page. “The key here is to let the person know that you value them, and the relationship and that it negatively affects you when you’ve had an argument,” says Dr. Winsberg. “If you have not heard your partner’s viewpoint, or you want to better understand it or where they are coming from, be sure to express curiosity.”

Shouldering your part of the blame for an argument is admirable, but what are you going to do to make sure it doesn’t happen again? “Saying something like this lets the other person know that you are motivated to work on things and try to avoid the same mistakes in the future,” explains Dr. Winsberg. “The desire to improve is often more important than any recent outcome.” While you can’t honestly guarantee you’ll never fight again, at least you can reevaluate your approach — collectively — with the benefit of meaningful hindsight.

One of the best parts of any relationship is the inside jokes. If you feel like the moment is right, leverage those unique, one-of-a-kind bonds you share with your partner to jump start the next conversation. “This one is tricky,” says Dr. Winsberg. “But, if you can pull it off, using humor conveys your shared time and affection for each other. The goal here is to create a sense of goodwill and togetherness, or just making the other person smile.” Avoid sarcasm, or anything that could be misinterpreted. But sometimes silliness is what can help two people meet in the middle.