A Love Letter From The Clean Energy Future

by Mary Anne Hitt: Here’s a glimpse of how we can transition entirely to renewable energy sources… 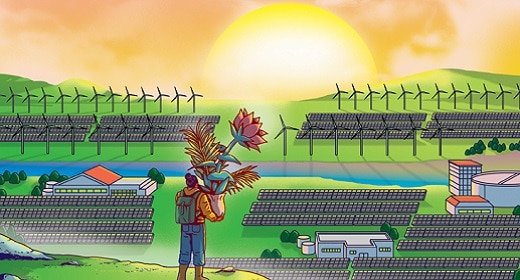 Last fall, I gave a Zoom lecture to a class of undergraduate students at the University of Puget Sound about the path forward on energy and climate justice. I always go into these presentations with some trepidation, because I know that many young people are overwhelmed by despair about climate change, and I want to be clear about what’s at stake without adding to their anxiety. After I finished, one of the students offered a simple appreciation that lifted a weight off my shoulders: “Honestly, this presentation has been a relief. I feel so much better. Thank you.”

I could relate to that student’s desperate need for a ray of hope. After a grinding year of climate disasters, racial injustice, and relentless threats to our democracy, it has been easy to lose sight of the better world that we are still, even now, building.

I’m full of hope because, against all odds, a just and sustainable energy future is being born.

Yet I’m full of hope because, against all odds, a just and sustainable energy future is being born. We at the Sierra Club are in the middle of building that future. From stopping the fracked-gas Atlantic Coast Pipeline to reaching the milestone of having 60 percent of US coal-fired power plants on their way to retirement, the progress in 2020 has been remarkable. The United States is on track to get more electricity from renewable energy than from coal sometime in the next few years.

But even as we make progress in hard times, we know that just covering the world with solar panels and electric vehicles isn’t enough. So what would it look like, 10 years from now, if we did this energy transition right—if we prevented runaway climate change, created millions of jobs, and rectified the harms of decades of environmental injustice in communities of color?

Imagine it is 2030 and we’re looking back over a pivotal decade in human history. Allow me to paint a picture for you of the energy transformation that’s possible. Think of it as a love letter from the future.

It takes my breath away to write these words, but we did it. Rooted in our deep love for this planet and one another, we stepped back from the cliff of irreversible climate change. Families around the globe, including mine and yours, no longer face the specter of fleeing their homes because of ever-worsening climate-driven disasters. The fossil fuel industry no longer controls the levers of power to corrupt democracy. And we’re building a world where everyone has clean air and clean water and access to nature.

As we rolled up our sleeves to prevent a climate emergency, our solutions prioritized investments in those communities most harmed by fossil fuels and pollution and those long excluded from economic opportunity. We needed to build so much clean energy infrastructure to avoid a climate apocalypse, and we didn’t just build it; we built it with family-sustaining jobs and with an eye toward restitution and reparations. Thanks to you, our kids will be raising their sons and daughters in vibrant, resilient communities full of opportunity. This is how we arrived here:

First, we powered the country with 100 percent clean energy. An electric grid powered by clean energy was the foundation for turning the corner on climate, and the dirty power plants that were the worst contributors to environmental injustice were the first to go. Building on a decade of grassroots advocacy, President Biden introduced and Congress finally passed a national 100 percent clean energy standard that put us well on our way to phasing out coal and gas by 2035 while ensuring that vulnerable communities experienced the benefits of the transition. Big states such as California and New York then set even more aggressive goals, making it clear that a clean energy transition of speed and scale was possible. And since decisions about how we produce electricity are largely made by states, we continued our 50-state energy-transformation push for a decade.

To support communities with economic ties to fossil fuels, Congress included a robust economic transition for fossil fuel workers and community-led economic development. Congress also passed innovative measures like a moratorium on utility shutoffs for households and support for energy-saving home improvements for families spending a high percentage of their income on electricity bills (known as a high energy burden). Renewable energy kept getting cheaper, and that allowed the Department of Energy to accelerate local clean energy solutions like microgrids—which are reliable during climate-driven extreme-weather events—in vulnerable and underserved places like the Navajo Nation and Puerto Rico.

We finally harnessed the power of offshore wind along the Atlantic coast and solar across the Southeast and Southwest, while scaling up new energy-storage technologies to make clean energy available when it’s needed most. Altogether, we made a quantum leap in the scale and scope of the energy transition, produced millions of jobs, and sparked the creation of thousands of new businesses.

Second, we got well on our way toward electrifying everything. Here in 2030, one of the best parts of the energy transition is that it has made our lives healthier. After social media icons spread the word about how gas stoves create indoor air pollution linked to asthma in kids, families rushed to their local home-improvement stores to replace gas ranges with electric induction stovetops. Local governments passed thousands of ordinances calling for all-electric construction in new buildings, which created enough pressure for national standards. New businesses started popping up to help homeowners save money while pulling polluting gas appliances out of their homes. And the Department of Energy created programs to ensure that low-income families could make the switch affordably.

After COVID-19 made Americans realize the importance of walkable cities and accessible public transportation, Congress included funding in infrastructure bills for clean and affordable public transit, biking, and walking options. The number of family-sustaining jobs skyrocketed as Americans were put to work building electric cars, trucks, and buses as well as transit and charging-station infrastructure.

Third, we stopped attempts to expand drilling while we reclaimed abandoned wells, mines, and drilling sites. The oil and gas industry was in a precarious place as 2020 came to a close. It was struggling to compete with renewable energy, facing the wrath of communities angry about drilling and pipelines, and grappling with dwindling returns from fracking, which made the industry’s finances look more like a pyramid scheme.

Through on-the-ground organizing, we prevented the fossil fuel industry’s last-gasp attempt to establish new markets for its products. We blocked the construction of more than a dozen proposed fracked-gas export terminals and halted the creation of a new “Cancer Alley” of chemical and plastics plants in the Ohio River valley. We forced the industry to stop drilling next to homes, schools, and communities. And we secured protection from drilling on Indigenous lands, including the Arctic National Wildlife Refuge and Bears Ears National Monument.

Meanwhile, we created jobs for thousands of oil, gas, and coal workers. We put 120,000 people to work plugging over 2 million abandoned oil and gas wells and addressing methane leaks that were roasting our planet. Congress also passed the RECLAIM (Revitalizing the Economy of Coal Communities by Leveraging Local Activities and Investing More) Act to fund reclamation projects and community-led economic development in Appalachia.

Finally, we engaged millions of people in the work for climate justice. Let’s be clear: None of this was easy. As we sit here in 2030, the clean and just energy future that we’ve built together has been the result of millions of people stepping up in their own states and communities.

I know all this seemed impossible back in 2020, when it felt as if everything was falling apart and our climate might be doomed. But everything we did mattered. All of it.

We now know that we’re going to keep global temperature rise below the dangerous tipping points that climate scientists warned us about a decade ago. We can look our kids in the eye and tell them that we didn’t let them down. Now we can watch their dreams unfold.

As all our great spiritual traditions have taught us, new beginnings are often born during our most difficult days. We created something beautiful out of those hard days in 2020. Of course we have more work to do. But we’re doing that work from a foundation we built together. I can’t wait to see what we’ll do next.