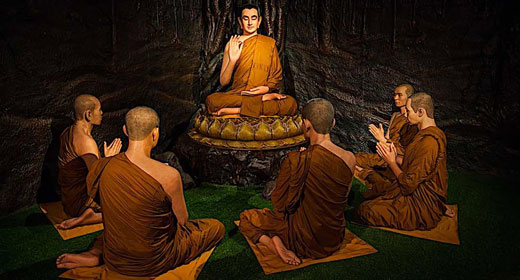 Zen Buddhist Literature has a reputation for being confounding, yet in many cases the challenges of the texts are a positive feature. The verbal puzzles called koans, for instance, are designed to be so impenetrable that the student is pushed to break through to a nonconceptual understanding. One of the most influential, and perhaps most perplexing, Zen texts is the Shobogenzo, a collection of writings by the 13th-century master Eihei Dogen, founder of the Japanese Soto Zen school. The Shobogenzo contains nuanced discourses on such subjects as the nature of reality, time, and enlightenment.

Although Dogen’s meaning often can be elusive, his intention was not to bewilder but to expound on subtle subjects as clearly as he could. Many of the passages seem cryptic in part because Dogen alludes to Chinese cultural forms and literature that today’s readers do not recognize.

At the Zen Life & Meditation Center in Chicago, Roshi Robert Joshin Althouse recently gave a dharma talk on the Shobogenzo’s most frequently cited section, the Genjokoan.

When it comes to spiritual truths and the authentic teaching of Buddhism and Zen, they don’t get much better than Dogen’s Genjokoan. I have read many different translations of the Genjokoan, and I find Dharmavidya David Brazier’s new translation, called The Dark Side of the Mirror, to be the clearest. It’s often assumed that the Genjokoan is a series of different teachings, but what this new translation makes clear is that this teaching is one piece of cloth all the way through.

To understand what Dogen is saying, we need to put ourselves into the mindset of a 13th-century monastic. Our style of practice at the Zen Life & Meditation Center in Chicago is less traditional, and our members are mostly lay practitioners. Dogen, however, was a very religious man, and this is a religious text.

Dogen’s early life was full of tragedy and misfortune. He lost his father when he was 2 and his mother when he was 8, and he felt this very acutely. As he was watching the incense smoke rise over his mother’s casket, he vowed to ordain as a Buddhist monk, and when he turned 13, he did so. He spent four years at a Tendai monastery on Mount Hiei, which was the main Buddhist center of Japan at the time. While he was there, a deep question arose in him about the teaching of original enlightenment, a dominant teaching that claimed we’re all inherently, intrinsically awake. And the question that arose for him was this: if we are already awake, then why must we practice so rigorously?

Dogen left Mount Hiei to study at Kenninji, a Rinzai Zen monastery, in Kyoto. But he was still dissatisfied and traveled with his teacher Myozen to study in China, which the Japanese considered to be a more authentic spiritual center. Myozen, and eventually Dogen, were accepted to the temple on Mount Tiantong.

One day, Dogen heard the temple’s abbot, Rujing, scolding another monk and telling him to drop off “body-mind,” and when Dogen heard that phrase, he had a “sudden awakening,” or kensho. A year later, Dogen received transmission from Rujing. By the time he returned to Japan about five years later (1233), he was really enthusiastic about teaching the buddhadharma.

This is when he writes the Genjokoan, this profound spiritual text.

The Genjokoan was written as a letter to a lay Buddhist practitioner or possibly a Confucian. We don’t know what the practitioner had asked, but we have to assume that Dogen wrote something that a layperson could understand, and that he wasn’t trying to be esoteric.

As David Brazier points out, you have to appreciate how, through his experience in China and his upbringing in a Japanese aristocratic family, Dogen was steeped in Chinese culture. Just as we are steeped in a cultural context that is secular, scientific, and humanistic, Dogen was soaked in Daoism and Confucianism. In spite of this larger context, however, Dogen always considered himself a Buddhist.

The central teaching in the Genjokoan uses the image of being a mirror, the dark side of the mirror. Daoist teachings help clarify and bring this important metaphor to life.

This is the crux of the whole Genjokoan. He’s saying that when you look at your reflection in water, there’s a tipping point: either the water’s transparent or it’s murky and reflective like a mirror. It doesn’t gradually become a mirror. It’s either a mirror or it isn’t. Dogen is using this as a metaphor: when you drop off the body-mind, when you forget the self, you become a mirror that reflects the dharma.

Dogen is criticizing the interpretation of original enlightenment that claims one can possess the dharma. One may have kensho, but one may not necessarily be aware of it. Waking up allows you to see and appreciate the dharma, and from this point of view the dharma is what is other than you, because the dharma is unconditioned. You and I are conditioned. To wake up, to be liberated, is to be able to reflect the buddhadharma, as it is, without your projection. You don’t possess enlightenment. It possesses you.

To make this point, Dogen alludes to Daoist ideas about yin and yang. The concept of yin and yang is very dialectical. You’re either on one side or the other. And if you go too far to either extreme, you can flip to the other side. Yang is the active, masculine principle, and yin is the receptive, feminine principle. Daoism would say that you should dwell on the yin side as much as possible, because it’s receptive and can see the other side. When we are on the yang side, we tend to be blind and act out in ways that are unbalanced. We need to use this male energy to be in the world, but once we’ve accomplished the task at hand, it’s wise to return to the yin side.

Dogen builds his entire argument around this central metaphor of the dark side of the mirror that reflects the buddhadharma. Later on he uses more opposites and pairs: Fish and birds, Buddhist enlightenment and delusion, shore and the boat, firewood and ash. He’s using these metaphors constantly throughout the Genjokoan, and he says the same thing over and over and over again: be on the yin side. He’s saying this: To get over yourself, appreciate what is other than you and get on with living, being liberated, free of the karma that we create. Trust the universe and let it carry you along.

When Dogen says that to study Buddhism is to study the self, he is inviting you to let go of your secondhand experience and see directly. Study your human nature, your habits, your thoughts, your behavior—and you may discover you are not as interesting as you thought. To wake up is to discover your authentic self, which is always firsthand and outside all contrivances and conventions.

The French sociologist Émile Durkheim (1858–1917) defined religious consciousness as the ability to make a distinction between what is mundane and what is sacred. Without enlightenment, we just have humanistic psychology or mindfulness, but that’s not the same as mindfulness in the context of a genuine spiritual path of awakening. And that’s not what Dogen is teaching. Dogen is very clear about enlightenment. He’s saying that’s the point—to wake up.

At the same time, Dogen is completely realistic. He’s not talking about an ideal of enlightenment. He’s talking about the actual living transmission of the dharma. The first four lines of the Genjokoan illustrate this point well. The passage starts off with Dogen talking about the Buddhist teachings from the outside, the yang side. As David Brazier translates:

Birth and death, practice and daily life, delusion and enlightenment, ordinary beings and all the Buddhas; such is the Buddha dao [Buddha way], Buddha’s dharma of all dharmas.

Then Dogen talks about experiencing the teachings for yourself. (Note that the term that Dogen uses for the Buddha way is Buddha dao, which carries a greater sense of the Chinese thought encompassing it.)

As the myriad dharmas are other than self, when one is in their midst, there are no creating and destroying, no sentient beings and all buddhas, no delusion and enlightenment.

He has moved to the yin side, where all those dualities disappear. Then, in the third line, he unifies the first two lines:

Out of abundance and lack, springs forth the original dao of Buddha, and for this there is making and destroying, delusion and enlightenment, and there are living buddhas.

He’s talking about when you are that mirror reflecting the buddhadharma. There is no self here, and the world is sacred through and through.

It’s possible to get stuck here—to think you’ve finally arrived—but the path is always the goal. Practice is enlightenment. With the fourth line, he throws cold water on you:

So it is and nevertheless, blossoms fall bittersweet and weeds spread amidst woeful resignations.

You just woke up. You just finished a seven-day sesshin [meditation retreat] and your samadhi [meditative concentration] is very strong. You are enjoying this peaceful, calm, and spacious awareness, but little by little, day by day it slowly fades. So you might feel slightly depressed that such clarity doesn’t seem to last. You are still subject to impermanence. Your body is going to get old, you’re going to get sick, and you’re going to suffer. You won’t return to delusion in the same way—but you will still have to deal with problems and difficulties. This is what is meant by the koan of Genjokoan.

Here, he’s bringing in a Confucian element, the principle of li, which means to perform rites correctly so that heaven and earth remain in balance along with the natural right ordering of daily life. This includes just doing your duties, like if you have a family member who’s sick and you have to take care of them instead of going out to a party.

Dogen is saying that enlightenment includes this Confucian idea of li, which is not a passive thing. You actually become engaged in some way with your community, your sangha, the world, your family. The koan of the Genjokoan is whatever circumstance you’re in. Your challenge is to take your place there, accept that situation, and work with it.

For Dogen, nonduality is not an abstract philosophy about the absolute and relative. He uses it as a practical tool. He says that when you are that mirror and you realize genjo, you manifest the truth of the phenomenal world and you have a responsibility to engage in the world. You have to do something. So when you give life to your life wholeheartedly by accepting what is right here, which is koan, then genjo is what manifests.

The Genjokoan begins with a reference to the buddha dao and ends with a discussion of li. But throughout he is talking about faith, a faith in the buddhadharma and a faith that is supported by rigorous practice.

He is saying, again and again, forget yourself, be humble, be modest. Whatever your circumstance, whether high or low, good or bad, that’s your life just as it is, so right here is always Genjokoan. But don’t be complacent. He warns that if you think you understand the dharma, then you probably don’t. Don’t think you’ve arrived at some place where there is no more work to be done. Wherever you’ve arrived is just a jumping off place for the next thing that you need to do. Don’t just drop off body-mind. Drop off the dropped-off body-mind.

Roshi Robert Althouse is an ordained Zen Buddhist priest and abbot of the Zen Life & Meditation Center in Chicago, which he cofounded with his wife, Reverend June Ryushin Tanoue.