by Jonathan Robinson: On the path toward enlightenment, there is an ever-present obstacle that one must face: fear. 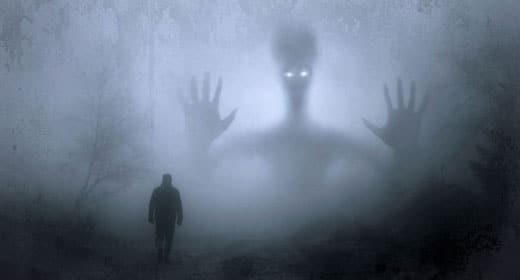 In recent years, as I looked into people who have reportedly awakened, a few things stood out to me.  First, a common report is that awakened folks don’t worry about or resist the difficult aspects of daily life.  Their level of fear of virtually anything has been reduced to just about zero. Second, it’s not that they can’t or don’t experience fear, resistance, or anxiety. It’s more a matter that they relate to these common experiences differently than most people.  Instead of fear being a scary thing to avoid, they relate to it as momentary sensations passing through a quiet and spacious field of awareness. Of course, this new relationship with fear has to be learned.

By the time I was 17, I had broken through some of my fears, but a big one remained: girls.  I was terrified of being rejected; I was afraid of intimacy and scared to death to be vulnerable. Yet at the same time, I felt a calling to get to know girls, shall we say—more intimately.  Of course, this “calling” was probably just teenage hormones beckoning to me.  As a freshman in college I was a virgin and I had never even asked a woman out on a date.  My fear of rejection was not only eliminating my love life, but it was also starting to affect my self-worth and ability to meditate.  Some action was desperately needed.

In my life as a writer and podcaster, I’ve had the good fortune to meet and interview numerous incredible people.  Many of them you would know, such as the late Ram Dass and Dr. Wayne Dyer. I’ve also had the good fortune to interview the Dalai Lama, Oprah, Deepak Chopra, Marianne Williamson, Jimmy Carter, Adyashanti, Byron Katie, and dozens of others.  When people ask me how I have managed to meet such people, I tell them, “I got over my fear of rejection when I was seventeen.  It took thirty minutes.  When you’re no longer afraid of rejection, you can meet the people you want if you’re persistent enough.”

There are many ways to handle one’s fears. Fortunately, in college I had a friend who knew a bit about psychology, and he helped me out of  my self-imposed prison.  His name was Joe.  It’s an interesting and rather funny story about how he helped me overcome my fear of rejection.

One weekend Joe came by my dorm room at college and asked me what I was up to. Like most weekends, I was locked up in my dorm room, feeling sorry for myself.  For some reason, I actually revealed to Joe what I was experiencing.  I said, “Well, if you really want to know, I’m feeling sorry for myself because I’m wanting to get laid, but I’m too afraid to ask any women out.”

Joe listened to my tale of woe.  Then he made me an offer I couldn’t refuse.  He boldly stated, “The way to get out of this fear of rejection is to fully face it head on.  That will take care of it—once and for all.”

I responded, “What do you mean?”

“Tell you what,” Joe began.  “Here’s my proposal.  If you go and get rejected by ten women today, I’ll treat you to a trip to Hawaii—all expenses paid.”  I knew Joe had been born into a wealthy family, so I believed he would truly follow through on his end of the bargain. Joe smiled as he carefully watched my reaction.

Joe’s proposal made my brain hurt.  On the one hand, the idea of going to Hawaii for free was fantastic.  On the other hand, the idea of getting rejected by ten women made me scared to death.  After a few moments of silence, I heard myself say, “If you’re serious, you’re on.”  Then I immediately thought to myself, “Ut oh, what have I gotten myself into?”

Joe responded, “Well there’s no time like the present. How about I follow you down to the University book-store and we’ll begin the adventure?”

I immediately felt my stomach do somersaults.  Yet, I had no good excuse for putting off this task, so I meekly agreed. Joe and I walked to the bookstore and he staked out a position where he could spy on me while I faced my worst fear in the world.

Having avoided asking women out my entire teenage life, I really had no idea what it would be like.  Well, I soon found out.  It was hell.  Beads of sweat started dripping down my face. My entire body started shaking—as if I was freezing to death.  I finally chose a nice looking young woman to talk to, and the conversation went like this:

Me: (shaking and sweating):  hell…hell…hello?

Woman:  (seeing me shaking and sweating)  Are you alright?   Do you need a doctor or an ambulance?

Me:   No, no, I don’t need a doctor…thank you…no…I just need to take a couple of deep breaths…

Woman:  (worried)  Are you having a seizure?

Me:  Ah, you seem very nice…would…would you maybe like to go out to lunch some time? It’s okay if you say no.

Woman:  Ah…gee…thanks for asking…um…ah…I have a boyfriend so I don’t think I can do that.

Woman:  Are you sure you’re all right?  You sure you don’t need a doctor?

As I walked away, I remembered something important—I hadn’t taken a breath during the entire encounter.  I was about to faint. I soon took some slow, deep breaths and  recovered as best I could. I had achieved my first rejection.  Woohoo!  Only nine more to go.

It ends up that facing rejection—or any fear—becomes a lot easier each time you do it. When I approached the second woman, another awkward conversation ensued, but it was definitely easier.  By the fourth woman I approached, I was actually pretty relaxed.  By then, I kind of knew what I and the woman I approached would say.   I would rattle off my lines, and the woman would make reference to a boyfriend or being busy—or something like that. To my surprise, I noticed I was actually feeling really great.  After all, I was facing and overcoming a life-long fear.  This was almost fun!

Yet, the seventh woman I approached ruined my momentum.  By this time, I kind of had a script I would use, and I found that every woman would use the “boyfriend excuse,”  or some similar line. So, as I sauntered up to woman # 7, I proclaimed, “Hi, I’m Jonathan.  You look like a nice person and I’m new here.  I’m wondering if you’d like to go out to dinner sometime.”

Woman #7 looked me over and was silent for what seemed like forever.  Finally, she said, “Sure.”

It had never occurred to me that some woman might say, “Sure.”  I suddenly realized I had no script for this unforeseen event. Somewhat stunned, I muttered, “Sure what?”

The woman responded, “Yes, I’d like to go out with you.”

I couldn’t believe it.  I blurted out, “Really?”

She wrote down her number and handed it to me.  I felt like I had just won the lottery.  A wave of adrenaline and endorphins surged through my body.  Armed with my new-found confidence and feeling of ecstasy, I approached the next woman.  To my amazement, she also said, “Yes.”  And so did the next woman, and the next, and the next.   My friend, Joe, couldn’t believe what he was witnessing. Soon I had eight women that wanted to go out with me.  I felt incredible.

Then I realized I needed three more rejections or I couldn’t go to Hawaii with Joe.  In order to get the last three rejections, I decided to start acting like a jerk.  After all, what’s the worst thing that could happen?  Nothing—since my goal was to get rejected.

I slithered up to an unsuspecting woman in the giant bookstore and tapped her gently on the shoulder.  Then, in my best ridiculous Playboy jerky voice proclaimed, “Hey baby, you look smokin’ hot.  How about you come to my place tonight for a rockin’ good time?  What do you say sugar lips?”

This woman stared at me for a moment—jaw hanging open and completely speechless.  Then, she smiled and said, “Sure!”

It ends up she thought my “act” was hysterical, and therefore wanted to go out with me.  Oh well…

So, to finish the story, I threw some water onto my face, and I did my “shaking routine” with some more women. Of course, this led to me getting my three final rejections, and I eventually went to Hawaii with Joe.  More importantly, I managed to reduce my fear of rejection from a level “10” of complete terror, to something more like a “3” of mild dislike.  This one simple shift in my psychology had enormous implications for the rest of my life.

From that fateful day onwards, I didn’t let the fear of rejection ever stop me from pursuing desired knowledge or people I wanted to talk to.  Whether approaching a woman I wanted to date or a famous author or spiritual teacher, I was pretty much fearless.  When I decided to start a podcast called “Awareness Explorers” in which I interview spiritual leaders, I was not upset or impeded by the massive amount of rejection I initially received. In fact, I wore it as a badge of courage.

Getting over my fear of rejection not only opened me up to a better love life and cherished spiritual connections. It also opened me up to living a life not dictated by petty anxieties or the need for constant safety.  I started to see that my fears were simply thoughts going through my head that I was identifying with.  If I could dis-identify with those thoughts, I could experience greater peace and freedom. After all, if there is no resistance or fear around facing a certain situation or emotion, it has no place to “stick.” The result is that it does not persist and block one’s path to peace. Once my mind was less focused on avoiding fear, my true nature of peace and stillness became much more evident to me.

There is no “one size fits all” recipe for how to face one’s fears.  Once you know the value of overcoming the ways fear limits your life, you search for method(s) that work for you.  Some common methods include talk therapy, deep breathing, acting as if you’re fearless, facing fears head on and seeing you survive, as well as many other valuable methods.

We experience many different types of relationships in our lives.  We have romantic relationships, as well as relationships with our kids, friends, and even a “relationship” with ourselves.  Yet, perhaps the most important relationship we have in life is the one we have with fear.  Usually, the relationship we have with fear is that of master (fear) and servant (us).  Whenever fear and its many disguises show its menacing face, we usually run in the other direction.  Yet, sometimes by chance or grace or act of will, we decide to face a fear.  Whatever the fear is we feel compelled to face, it’s in such moments that most personal growth and transformation are born.

Jonathan Robinson is a psychotherapist, bestselling author, and the co-host of the podcast “Awareness Explorers.” He can be reached at AwarenessExplorers.com