by Jonathan Robinson: In 1996, I helped create the largest participatory event in human history. 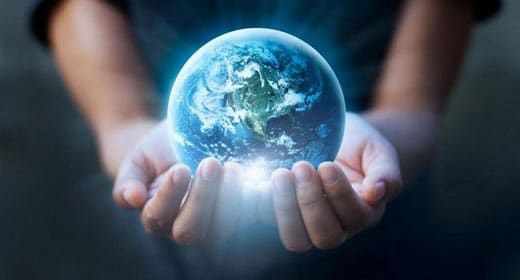 For the ten previous years I had pleaded with the International Olympic Committee to set aside a single minute during the Games for people to focus on world peace and goodwill to all. With a TV audience of over a billion people, this would be a big event.  To my amazement, it actually happened—sort of.  At the Closing Ceremonies of the 1996 Games, the International Olympic President announced that everyone watching should take a moment of silence and focus on their hopes for goodwill to all.  I had asked that this event be a full minute long, but they only gave it 20 seconds.  Nevertheless, it was a wonderful moment to celebrate our shared hopes for a better world. After twenty seconds of silence, Stevie Wonder led the global audience in a heart-felt rendition of John Lennon’s song “Imagine.” There was hardly a dry eye in the Olympic Stadium.

This event at the Closing Ceremonies of the Atlanta Olympics was a beautiful moment for humanity—yet it was also the beginning of an important scientific discovery.  For many years, scientists had been studying the effects of global events on something called Random Number Generators or RNG’s.  RNG’s are basically computers that can simulate tossing a coin many times a second.  According to known laws of physics, the output of RNG’s should be a completely random string of “heads” and “tails.” Yet evidence has mounted that, when significant global events occur, these RNG’s start spewing out non-random numbers that defy the laws of physics and statistics.  In fact, according to researchers at Princeton University, the chance of their not being a connection between global events and their effect on RNG’s is less than a trillion to one.  Basically, these researchers are saying that when large groups of people focus together, the laws of physics break down and “reality” is altered!

First, you should know that I’m not some woo-woo New Age evangelist.  I’m a psychotherapist and former researcher of psychic phenomena at U.C. Santa Barbara.  I take pride in following what the data indicates–instead of what I think “should” be happening.  History is replete with scientists who proposed theories that were attacked as being ridiculous—until they were proven true.  From Copernicus to Einstein, discoveries have been made that were first ridiculed, then grudgingly accepted, and finally went on to change the world.  So, in that tradition, I want to propose a simple theory:  when enough human beings are focused on a specific idea or event, they have the power to alter the knowns laws of the universe and impact reality in positive ways. While science has begun to show evidence for this theory, and you may in fact accept it, its implications could easily change the course of human history.

What if it became widely known that human beings could, through events such as global prayers and mass meditations, truly heal the world?   Potentially, that could be as world changing as the discovery of fire, the taming of electricity, or the invention of the Internet. Of course, we don’t yet know how mass human intention is able to affect the world, but nor do most people know how the Internet works.  Nevertheless, not knowing how something works doesn’t prevent people from using it. If it became common knowledge that collective human intention could positively impact the world, a lot of things could change very quickly. If you want to look at the science supporting this theory, you can look at the website of the Global Consciousness Project: https://noosphere.princeton.edu/

Currently, we live in a highly chaotic and polarized world. Although all human beings are pretty much genetically identical to each other, we live as if we’re at war with our fellow earthlings.  Such animosity towards our fellow man and woman makes it almost impossible to overcome  current challenges such as pandemics, global warming, and inequality. Yet, if we could come together to focus our collective intention on creating more planetary peace and love, who knows what might happen?   It could potentially produce a whole new way to solve our collective problems.   In a world in which the U.S. government admits there are UFO’s it doesn’t understand, and pandemics can quickly transform how we live, who can say what’s possible?  Perhaps our understanding of the power of collective intention can be what helps us to heal our many planetary crises.

In 1996 when my global peace project came true at the Atlanta Olympics, scientists were not prepared to study the phenomena of collective intention in depth. It wasn’t until 1998 that over 100 Random Number Generators were set up around the world to measure the strange results following mass human events. Now that RNG’s and scientists are in place to study such things, I propose a simple experiment:  Let’s create periodic mass events where people focus—for two minutes–all their thought and intention in sending love into the world.  That’s it.  Love is something everyone understands and desires.  By imagining sending love to people you care about or to the planet as a whole, you’ll surely end up feeling good.  Yet more importantly, we may discover that such brief mass meditations have real world positive effects.  What if it could be proven that such events could reduce crime or even end wars?  That would surely change the world.

Before you begin thinking my idea is far-fetched, there is already evidence that supports the idea that mass meditation events can reduce crime and end wars.  In fact, this idea has a name and it’s called “The Maharishi Effect.” Here is some research that you can look at: https://tmhome.com/benefits/study-maharishi-effect-group-meditation-crime-rate/   Unfortunately, most of these studies involved just hundreds or perhaps thousands of individuals, not millions or billions of people. The effect may be exponentially stronger the more people participate.  The next Olympic Summer Games are in Paris in 2024. What if we could get two billion people simultaneously focused for two minutes on feeling and sending love?  Who knows—maybe some kind of “love wormhole” would be created that would change the course of humanity!  It’s worth a try.  Even if little happened as a result, it would still be a heartwarming moment celebrating our highest shared human experience.

The good news is we don’t need to wait for the Olympics to begin to tap into the power of love.  Each of us can begin by taking two minutes a day to sit quietly and focus on the feeling of love and goodwill to all.  You can do this in whatever way works for you.  For me, I often focus on remembering moments of love with my dog or my wife.  As I remember sweet moments of connection, I feel my heart open and a warm sense of love fill my body. Then, as I relish the feeling of love, I imagine sending this love out to people I know and to the world at large.  It’s a wonderful experience that leaves me feeling refreshed and open-hearted.  Yet, as more and more people do this type of practice, it may help us all tap into a power beyond our wildest imaginings.

In this time of increasing polarization and planetary problems, we could all use some hope and a sense of empowerment.  The idea that there may be a unique new way to help our planet is truly exciting. Just as electricity was always a force waiting to be utilized by humankind, perhaps mass human intention and love are currently untapped resources with great healing power.  Science has already proven that tapping into feelings of love—even for short periods—can have healing effects on our own bodies.  Yet, feeling compassion and connection to the entire human species can be an even more profound and healing experience.  Astronauts that get to view the Earth from space and see our connectedness are often deeply transformed. I believe that, as we tap into our shared humanity by focusing on love and goodwill to all, we will unleash a force that will transform humankind and the planet. May “the Force” be with us all.

Jonathan Robinson is an author of 14 books, and the co-host of the popular podcast “Awareness Explorers.”  He can be reached at AwarenessExplorers.com