Our 5-yr-old: Alone But Not Lonely –by Ragunath Padmanabhan

by Ragunath Padmanabhan: Our 5-yr-old son Aum had been playing on his own at the farm for two hours… 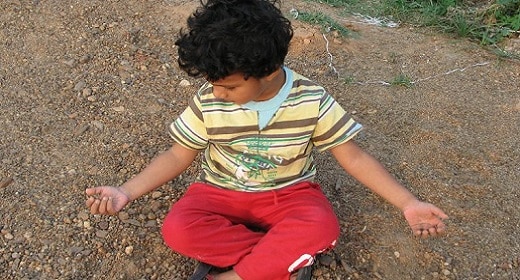 About an hour into it, my wife Nisha admonished me: “You really enjoyed your childhood with your two siblings, kids in the neighborhood and at school. Now look at him, being alone, no one to play with and nowhere to go. Do something!” 4 years ago, we’d made a conscious leap into a rural India, leaving high-tech careers in the Silicon Valley to do natural farming.

Nisha has just as much conviction about our decision as I do, and yet, on occasion, she and many other loved ones have genuinely felt bad because Aum does not have company. He is our only child and he doesn’t go to school (we farm-school him) and there are only three kids in the nearby farms, none of whom have much time for him since they go to school).

Everyone in Aum’s life is concerned about his loneliness. Except Aum and me. The evidence that he is not “lonely” or “bored” is right in front of everyone’s eyes — when we are not engaged with him, Aum is busy most of the time with his own thoughts, things, games, dancing, etc. Occasionally he throws in his share of mischief and tantrums, just to remind us that he is a kid. Otherwise, I have never seen him unhappy for the reasons most adults in his life feel he “should” be unhappy.

Aum does not have the company of his peers as much or as frequently as other kids. We don’t have a TV at home. We have never bought him any toys except one lego set and one tinkertoys box that Nisha got after she felt bad about not having bought any toy for him. Most of his clothes are gifted by family and friends. We give him one or two candies a week and ice cream once a month. He doesn’t have cookies, chocolates, carbonated drinks, fast food or any snack that comes in a package and is sold in a retail store. He must be one miserable kid, right? If I say, “No”, one might respond with, “Well, he doesn’t know what he is missing and he is being brought up in an extremely protective environment.” Not true either.

He knows the reasons for all the choices we have made for him and he has willingly embraced them. In fact, he is ever-ready to explain his choices to anyone who wants to know. He has tasted/experienced everything other kids have and is presented the opportunities many times, given our frequent visits to many relatives and friends in different places. Of course he gets tempted at times and rebels. Steering away from the extremes of bribing and punishing, we manage to strike a balance and help him stick to his better choices.

He doesn’t have grand ideas and concepts for what would bring him happiness. He is just fully living his life. Everything has meaning for him. He doesn’t overlook this moment expecting another; he is not chasing after anything and has no plans for tomorrow. He goes around as if he has an unlimited reserve of energy, curiosity, time, faith and willingness to be engaged with whatever and whoever comes his way as if … as if he intuitively knows what he wants. If he could answer the question “What do you want in your life?” it would probably be, “I don’t know, but I want it all anyway, moment by moment.” And he does not seem to be bothered if many of those moments are spent alone. But it does rattle quite a few others.

To my mind, the rural and middle-class people of the last generation and before, had the right perspective on elusive states like peace, happiness, joy etc. They communicated through many proverbs and clichés — that meaningful engagement at work, being with family and friends and with oneself, pretty much covered all the real causes of happiness and peace. The meaning for engagement could come from both tragic and comic life situations (and more often than not, their lives were full of tragic meaning). People did not make decisions with the sole focus on whether it would make them happy. Happiness was just one of the considerations. Perhaps meaning was a more important consideration. There is no other way to explain sacrifices that I know of in history and even in my own family. My own father has always been a happy-go-lucky man all his life, in spite of having access to very limited resources, very few choices and very many responsibilities. I look at him and I know I can be happy, no matter what.

Being in the farming world, someone asked me recently whether there is a specific gene in fruits that give them sweetness. He speculated that if we could find that gene, then we could increase the quality and quantity of sweetness in fruits. But what if sweetness is not an isolated characteristic of a fruit? What if it is the culminating effect of the entire growth process — from seed to ripening? Of course, we don’t eat fruit that is not ripe and sweet. But do we eat fruit only for its sweetness? Would anyone be satisfied to extract only the sweetness of a fruit and take it as a tablet? Can happiness, then, be had at any moment as an instant thing to be consumed? Yet, we behave every moment of our lives as if our only aim is to avoid everything that would bring unhappiness and seek things that would bring happiness:

Being alone, having nothing to do, sacrifices, inconveniences, criticism, waiting, bad luck, randomness, an uncertain future … these are supposed to bring unhappiness and we avoid them.

Constant engagement of mind/and or body with work, people or entertainment, selfishness, creature comforts, instant gratification, security, certainty, greed … these are supposed to bring happiness and we seek them at any cost.

Many saints and religions have said that it is human nature to be constantly oscillating between cravings and aversions. Knowing this, throughout history, people in all cultures created norms, rituals, customs, traditions, practices, ceremonies and attitudes to contain excitement and embrace difficulties (the middle path, the golden mean). In fact, “to mature into an adult” was supposed to mean that one has learned to discern and implement his or her cultural baggage without superficially considering it as a burden. Even blindly following one’s culture was considered better than simply being blind to it. Yet that is precisely what seems to have happened on the backs of our over-sized, over-paced materialistic and technological growth. If we were to personify our zeitgeist, it would be a person with over-sized hands, legs and brain. And a small, feeble heart.  No wonder we eat but we starve; we have more of everything and feel empty; we can do everything super-fast and yet do not have enough time for anything.

Our idea of moving to a farm in a village was to create a space from scratch in which we could reinvent many of those old, middle-path practices to suit our current potentials and pathologies. Outside of the context of our farm (and sometimes even within), I find it difficult to follow these values and practices because, I guess, the human psyche has seen too much evidence of the inefficacy of the old secrets. I often feel like a fully-suited man in a beach. But it is only because we have hurriedly created suffocating spaces that have given birth to many unskillful and even vicious cycles. What we need are airy and nourishing spaces where we can relearn the old arts. 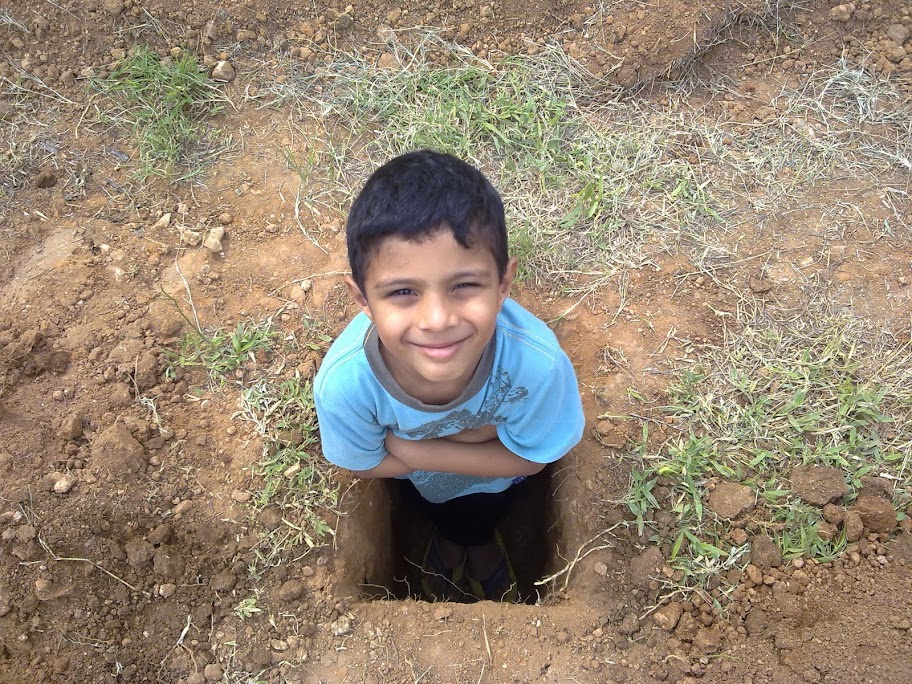 I am only 38, yet I feel like an old man of another era when I catch myself reacting to someone’s complaints or ambitions that are normal in this era. I am neither poor, nor rich, nor middle class. I am in the process of going off-the-class. Yet, I’d like to keep the older middle-class attitudes towards life. Without the aid of great philosophy or religion, all the secrets of everyday happiness – hard work, honesty, grit, grace, patience, wonderment, contentment, romance, even innocence – it was all there in that class. I’d like to be a permanent student in that class and have my son Aum be the teacher.