by Dr. Clarissa Pinkola Estés: My grandmother said that if you listened to stories about Mother Maria for nine weeks straight without interruption… 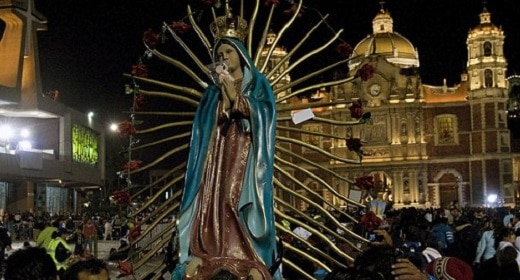 or if you said the rosary for nine days straight without your mind wandering once … or if you walked to one of Mama Marushka’s shrines in the woods for nine nights in a row — nine being the number of months Blessed Mother carried the living Christo before giving birth to the Light of the world — that if you would do any of these, that Blessed Mother would appear to you and answer any question you might have about how to live on earth fully ensouled.

But my grandmother also said there was a shortcut. Need. That any human being needing comfort, vision, guidance or strength was heard by the Immaculate Heart … and thus, Blessed Mother would immediately arrive with veils flying … to place us under her mantle for protection, to give us that one thing the world longs for so: the warmth of the mother’s compassionate touch.

I know you and I have seen many statutes of Our Lady, lovingly made, erasing all her Semitic features or her Asiatic, Inuit, Nahua, Polynesian, tribal European, Celtic, African, indigenous ones.

I don’t believe this was meant as a racial preference. Perhaps in the beginning, “whitening,” as in ancient alchemical poetics, was merely an attempt to show that whiteness and purity are often associated in much “Western” imagination.

So white-skinned. Blonde-haired, and our Mary Maria, Mir-yam, Guadalupe, over the eons became spoken about in more and more hushed tones too:

As they say, so content, so gentle, so quiet, so passive, so submissive.

Yet, I must say No. I say instead: Fire.

I know, and I hope with deepest love that you do too, know the Mary, Maria, Mir-yam, Guadalupe of wilder heart, of long journeys with a blurred map, of night fires at the far encampment. Our Lady who, when all the apostles ran away … she stayed. Blessed Mother, she who is renowned as the one able to wear the flaming, exploding fire lakes of the Sun.

No demure little cabbage, that woman. No paltry, well-behaved carbon dot. No follower of worldly orders. Quite the contrary. Our exemplar.

I’ve a little white porcelain Mary that some good soul hand-painted carefully in a factory of thousands of porcelain Marys on a conveyor belt … tiny gold curlicues on the selvage of her mantle. And lovely.

But the Mother I carry with me everywhere is the woods-woman La Nuestra Señora, Guadalupe, she whose green mantle is fashioned of moss from the north side of trees … and star shards caught in her wild silver hair … and her gown is soft, coarse woven cloth with the thorns and flowers of wild roses caught in it, and she has dirty hands from growing things earthy, and from her day and night work alongside her hard-working sons and daughters, their children, their elders, all.