Satsang: A Gathering Of Consciousness

by Roger Gabriel: Being on a spiritual journey can be fraught with many challenges and obstacles… 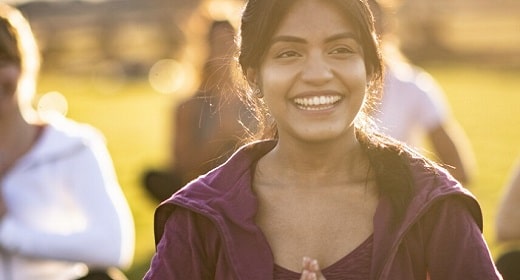 Questions, concerns, and doubts may arise at any time. We sometimes feel stuck or just spinning our wheels, in need of some external insight or inspiration. Or perhaps we just wish to share our spiritual story with others. Satsang provides the opportunity and support for all of these.

The word Satsang is made up of Sat, meaning truth, and Sang, which means together. A Satsang, therefore, is a gathering together to seek truth. Sometimes it is described as a gathering to discuss truth but, unless the participants are enlightened, this would probably be an overstatement of their abilities.

In ancient times, Vedic wisdom was an oral tradition. Disciples would gather around their guru to hear discourses and receive spiritual guidance. Some of the earliest examples were the Upanishads. The word Upanishad means “to sit near”, so these great Vedantic teachings give us insights into higher states of consciousness, shared by enlightened sages with select students.

Within the Upanishads, we find the “great statements” or “great truths”, the Mahavakyas, which when given to the students at the appropriate time, would create an instant expansion of their awareness. When I read the Upanishads, I sometimes imagine I’m back in those early days, part of the original gathering, basking in the unfoldment of that great wisdom. Try it.

In later times, teachers would often travel to holy sites, towns, and cities debating Vedic philosophy and offering Satsangs. One of the best known these was the seventh century Adi Shankara, who traveled the length and breadth of India and established seats of learning which still exist today.

Two of the greatest Satsangs ever are those recorded in the Bhagavad Gita and Yoga Vasishtha. In the Gita, we witness the eternal truth, given directly from the mouth of God in the form of Krishna to his student Arjuna. The Yoga Vasishtha on the other hand is the teaching that everything is consciousness, given by the sage Vasishtha directly to God, incarnated in the form of a young Rama.

Most great enlightened teachers, past and present, have or do lead what can be considered Satsangs, including of course the Buddha and Jesus.

Satsangs are now universal and not exclusive to Eastern traditions. Most cultures throughout the world incorporate spiritual gatherings of some sort, perhaps guided by a religious leader or, if you are fortunate, an enlightened master. However, they can simply be a group of like-minded committed spiritual seekers, looking to awaken and uplift themselves by finding a deeper truth or meaning to life.

A Satsang can be of any manageable size, including India’s Kumbha Melas, which are a collection of mega Satsangs. Here, in four locations, every twelve years, thousands of gurus and millions of followers gather.

One meeting for everyone would be impossible but, all day every day for several weeks, small gatherings take place throughout a huge encampment. Pilgrims can get rare glimpses and hear the teachings of gurus and yogis who are often inaccessible at other times.

Most people don’t have easy access to enlightened gurus or great spiritual leaders, but nowadays it should be possible to find local communities which can offer support and guidance from others who have similar experiences.

While you can of course choose to go it alone, as the hermits do, the average person usually finds engaging with a community brings the greatest value. You could choose to live or spend time in a designated community such as an ashram but, for most, having access to a local group of similarly interested people is enough to help keep them on track.

Most religious organizations, as well as offering set events such as church or temple services, also host open discussion groups, which may also include meditation, prayer, and contemplation. Today’s proliferation of yoga studios is also a good place to find a spiritual community.

While it may help in certain circumstances, everyone in a community doesn’t need to follow the same practices or philosophies. As long as there is no conflict, it can be healthy to hear other opinions and points of view. Ultimately all paths started and will end at the same Truth.

If you can’t find a suitable group, start your own. Anyone can organize and host a Satsang. You could use a private home or often, community rooms are available for little or no cost, or you can be virtual. It’s not customary to charge for Satsangs, except enough to cover any basic expenses.

If you are already part of a community, belong to a yoga studio, or have students of your own, this is a good place to start gathering members for your Satsang. You can advertise on social media, community noticeboards, and by word of mouth. It’s fine to start small with just a few people. You and the group can decide on the regularity of the meetings.

Someone needs to direct the flow of the Satsang. This could be you, it could rotate each time or you could invite guest speakers. No matter who is leading, it’s important that everyone feels part of the discussions and comfortable asking their questions. A Satsang is an opportunity to dissolve barriers and differences, allowing everyone’s voice to be heard.

The Satsang can be quite simple, a meditation suitable for everyone, an open discussion, perhaps closing by listening to or joining in a spiritual chant.

Alternatively, there could be a theme for the Satsang, chosen by the leader. As well as meditation, this might include reading from or listening to the words of a great teacher before reflecting on their meaning and how to assimilate them into daily life.

Seva or selfless service is an important part of a spiritual practice. The Satsang could be an opportunity to discuss and recommend projects that would benefit members of the Satsang or people in the local community. Your Satsang could include prayers or blessings for the world at large.

While there is always a special energy when meeting in person, modern technology offers many opportunities for meeting virtually and connecting with a more diverse group of people. Because of potentially different time zones, there may need to be more flexibility when planning a virtual Satsang but the format can be similar to what has already been suggested.

Although Satsang is most commonly thought of as being with a group, it can also be a private relationship with Truth. Inner Satsang can be thought of as sitting with our Self, perhaps practicing introspection, self-reflection, and contemplation. It can be listening to the guidance of our own insight, intuition, and the voice of our inner guru, our Higher Self.

The term darshan means to see or be seen by a highly evolved being. If we are fortunate, this could be an in-person experience but we can create Satsang with departed saints by reading or studying their teachings and then reflecting and meditating on them.

Spend time walking or sitting in Satsang with Mother Nature. Open your senses and enjoy the wisdom she has to offer. Hear the whisper of the wind, smell the earth fresh after a shower of rain or gaze into a starlit sky. Look into the eyes of an innocent child and see Truth smiling back at you.

Sometimes we need to be creative in recognizing the opportunity for a Satsang. I had such an experience when I met my Guru Sri Satuwa Baba. Although he lived a very simple and humble life, it was obvious that he had great spiritual wisdom and radiated unconditional love. However, his English was limited and my Hindi wasn’t worth mentioning so deeper spiritual discussions were only possible when a bilingual member of the Ashram was available.

So, for the years, before he physically left us, during the weeks and months I was blessed to be with him, I mostly just sat and sometimes traveled with him. He encouraged me to meditate in his presence but I also watched, so that some of my greatest teachings came from his humble service to others. My Satsangs became one of silently witnessing and hopefully absorbing, the life of a great saint.

Deepak Chopra has projected that if one billion people follow practices for expanding their awareness it will create a quantum shift in consciousness for the whole population. When we come together with other seekers of truth we are helping to raise the collective consciousness.

The individual Satsangs all over the world are the building blocks of a better, more enlightened world for all. The great teachers of the past have shown us the way but it’s now up to us to follow it.

Together we can create a time when every day is spiritually uplifting and everyone is part of a continuous global Satsang.