The Mystical Meaning of Christmas

by Bryce Haymond: At this time of year the Christian world celebrates the birth of Jesus during a holy day we call Christmas. 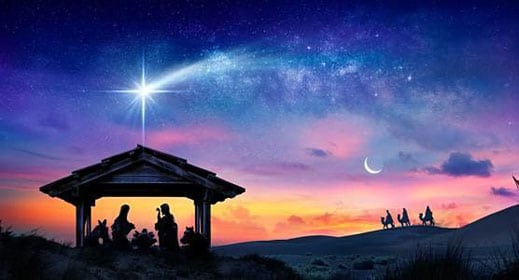 This birth happened some two thousand years ago, which brought into the world a man who many billions of people today have come to adore and worship as both human and divine.

Jesus is known as the Son of God, God made Incarnate in the flesh, who lived among humanity, taught divine truths, and who many believe took upon himself the sins and errors of all of humanity, all people who have ever been born, in order to save humanity, to bring salvation to the human race in a heavenly kingdom of God. He became known as the Christ, the “Anointed One.”

Much of this story has truth in it. However, many mystics and others throughout history have intuited that we have largely corrupted the essential teachings of Jesus so that we greatly misunderstand who he was and what he did and taught. Consequently, we greatly misunderstand ourselves and the meaning of our lives. As Esau, we have sold our birthright for a mess of pottage.

Jesus didn’t come to proclaim his own exclusive divinity, saying “worship me and me alone as God,” but rather he had this radical realization:

Divinity exists in all of humanity, and in Life itself, even the Light of Truth that lives within you and within me. It is our essential Being.

This is what he taught. This is what has been lost repeatedly throughout human history, even since long before Jesus, and is continually being restored by mystics like Jesus. The following is what I perceive to be real about Jesus, and what Christmas means to me.

Jesus was born as any other typical Jewish baby. He was raised in typical Jewish circumstances, with typical Jewish parents. There was nothing extraordinary or abnormal about his upbringing, his education, his vocation, or his stature in society. He was a normal member of the Jewish culture and community of his time. He may have been taught to be a carpenter by Joseph, his father. There was nothing in his childhood, adolescence, or young adulthood that would bring him any attention. He lived a fairly typical life for a Jewish man. He was like you and me.

Then something happened which changed everything.

When Jesus was about the age of thirty, there came a Jewish preacher into the area known as John. He preached that the Jews should be baptized in order to be cleansed from their impurities, a kind of ritual washing from uncleanliness (perhaps related to the Jewish tevilah, or ablution), becoming pure in body and spirit, in preparation for a coming Messiah. Jesus sought out John, perhaps followed him for a time, and asked to be baptized of him.

At some point around the time of his baptism, Jesus had an ultimate spiritual awakening, a rebirth, an enlightenment, a unitive mystical experience, a deep shift in his consciousness, a realization, a resurrection, an insight into the divine nature of his Soul. Jesus saw and knew that he was much more than his temporal egoic persona, more than his name, more than his limited human knowledge, or abilities, or memories, or mortal life. His ego psychological self fell completely away in consciousness and he perceived the depths of his being, even Being itself, the I AM.

He saw that he was Life, the Light of consciousness, the Truth of existence and of the cosmos that had become aware in the Incarnation of flesh and bones that was his physical body. He knew his true Self as the Light-Energy of the Universe that flowed in and through all things, all life, even the Universe itself that had fully awakened within his body and conscious mind.

This was ultimate and final peace, rest, love, joy, and eternal life, for he knew that he was not a limited mortal human individual, but a living manifestation of the Whole of the Universe itself, and that this Being extended to encompass all things within the Universe, all people, all beings, all existence, all life, all love. He saw that he was One with it all, and that this All was the Source of his mind and body. This was final salvation, liberation, freedom, and release from all the limitations, faults, sufferings, and errors of his human ego, and thereafter he suffered for all of humanity only as they suffered as the Self. He went about comforting those who needed comforting, mourning with those who mourned, because they were Him!

This experience that Jesus had encompassed the whole of the message that he was to spend the rest of his life teaching to others, and helping to guide them to have the exact same realization for themselves. He called this realization the “kingdom of God,” and the way to it “repentance” (the Greek metanoia, meaning a “change of mind”). It meant putting off all selfish egoic pursuits, wants, desires, aversions, thoughts, concepts, and even egoic consciousness itself.

All that Jesus taught from that day until his death was related to helping others come to the very same state of unitary consciousness that he had attained himself, to perceive the fullness of one’s own being perfectly at-one with the whole of the Universe and Cosmos, eliminating all obstacles to that realization, and promoting the Life and Love that emanate from that Divine realization. This is resurrection, salvation, liberation, even the coming of Christ consciousness within one’s own Self, even the Second Coming. This is the “Anointed” consciousness, a consciousness which perceives all things as one eternal loving union with the Cosmic Self.

This was the apocalypse, the revelation, the parousia. This was the “Savior” of all beings, the “Messiah” of humanity, being saved from their very own selves (egoic consciousness) in the Self, realizing a much greater and true identity with the whole of the Universe from which we all emerge from and are ultimately embedded within. We’re not separate from it; we never have been. This was the Infinite At-one-ment, the perception of the perfect, holy, pure, complete, and precious soul of one’s Incarnation, absolutely clean from all faults and imperfections, as a stainless and bright creation of the Universe. This was redemption from the Fall, a return to the Garden of Eden, a union with all things as One, all existence, even the Presence of God. Jesus helped to bring others into that same conscious Union, as described in the Mount of Transfiguration.

That Peace, that Hope, that Joy, that Rest, that Jubilee, that Oneness, that Wonder of Wonders, that Miracle of Miracles, that Way, that Truth, that Life, that Light, that Endless Love, that Godhood all exist within each and every particle of creation, all beings, all persons, including You and I.

This was Jesus’ message.