Thinking Of Sending That Quick ‘Love You’ Text? Just Do It

by Carol Milberger: Even one message can mean a lot to your family and friends… 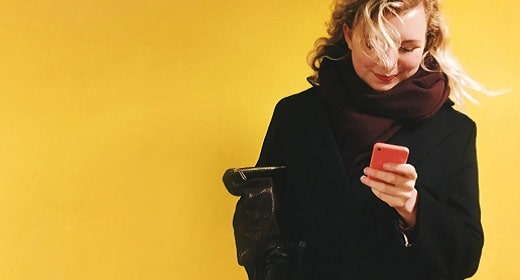 AS MY SON prepared to leave home for coding boot camp five years ago, I worried his communication style wouldn’t match my need for updates. I didn’t want to badger Justin (not his real name) but needed to know he was OK living over a thousand miles away. Before he left, I requested a weekly update via phone, email, or text. Justin selected texting.

The use of short written notes isn’t new. Folded notes traveled in batonlike fashion across rows of nonchalant students for generations. Then, almost overnight, handwritten notes were replaced by electronic messages. Social engagements, errands, lists, and countless updates travel faster, farther, and more frequently via text. Text messaging is the most widely used smartphone feature, so it wasn’t surprising that Justin chose this communication method.

As I watched him pass through airport security with a backpack and no checked luggage, I drew comfort knowing I’d receive an arrival message followed by weekly updates.  As time went on, interview preparation and first-job bulletins were traded for garden and family summaries, while workout, diet, and pandemic news flowed in both directions. Justin flew home, and my husband and I visited, but my son’s texts were as important as the visits—at least to me. Over the years, we’ve probably shared as much by writing as if we’d managed to talk weekly.

Texting’s asynchronous nature is a huge factor in its success. Glen Morgan, retired clinical psychologist and behavioral science researcher at the National Institutes of Health, says texting is perfect for those too busy with work, school, or families to add synchronous, or real-time, conversations to their day. Both parties don’t have to be available to converse via text. It’s more convenient to respond as time allows than to interrupt the day for a phone conversation.

Texts are short in nature, which is another plus for those with busy lives. Morgan says texting is a great way to reach out when there is competition for time; texters get lots of connection for their effort. He added, “Texts can be very effective with only 30 seconds or a minute of effort, unlike phone calls where the time expectation is much longer.” Very few phone calls last less than a minute or two, but plenty of messages are that short.

Eric Cardwell, an individual and couple’s therapist, said humans have a strong need to feel attached to one another. “fMRI studies show the brain’s pain centers have less activity during periods of human connection,” he says. That social connection also helps reduce anxiety and depression. You can make those connections in multiple ways, such as through touch, voice, and even text. Cardwell sums up the advantage of connecting via text concisely, “the content doesn’t have to be lengthy for the connection to be enormous.”

Morgan said that one advantage of having an established texting routine is that it avoids the social anxiety of initiating a conversation. It can be burdensome to always be the one to initiate, even for a texting conversation. Justin and I fell into a communication pattern pretty quickly. I initially messaged throughout the week, but Justin held fast to a single Sunday evening text. I landed on a weekly response, and we’ve maintained this routine ever since.

Our once-per-week routine probably isn’t the norm. Cardwell said one of the benefits of texting is that it offers a quick, immediate way to connect. He noted that many couples text each other throughout the day. Something as simple as a smiley-face or kissy-face emoji, with a quick in-kind response, can trigger positive feelings. He adds, “there is something soothing and healing about human connection, and texting is a primary method of connecting these days.” While texting is invaluable for quick, stay-in-touch updates, my goals were to know Justin was OK and to remain in touch enough to avoid becoming strangers.

The pandemic reduced in-person interactions for everyone. Cardwell said the Covid-induced restrictions taught us “there are many ways to reach out and connect to each other.” When we couldn’t hug, we maintained relationships via Zoom, email, phone, and text. Many people felt anxious about returning to the demands of in-person interactions after being isolated for months. Morgan spoke to this, as well, and says sending a text is much less socially demanding than having to pay attention, respond, and be present during an in-person interaction or telephone call. He adds that the “expectations are higher with voice conversations—we expect responses to questions and get frustrated with long pauses—whereas such pressure doesn’t apply to a text exchange.”

Parents of young adults often share tips to entice responses from children busy with college or career. One option, almost guaranteed to get a response, is to send a picture of the family pet. When one mom sent a picture of the family dog with a request for “snout time,” she was rewarded with a chatty session between daughter, dog, and phone-holding parent. Snapchat is another popular, low-effort option, with some parents satisfied by simply seeing their child open the daily chat message. Some families have a daily or weekly routine for these “Proof of Life” texts like Justin and I, while others operate on an as-needed or travel-related basis.

If your first reaction is that older folks wouldn’t be interested in texting, don’t count them out. An AARP technology attitude survey reported that more than 80 percent of respondents over age 50 use technology (texting, email, social media, and video) to stay connected, with many doing so daily.

Cardwell said reaching out with a positive, simple greeting or a “miss you” text is a good way to break the silence, if there is any. Depending on your personal preferences, you can shift direction to talk about fun memories or common interests like travel, cooking, gardening, music, or movies. I used to put a comic strip in my daughter’s lunch to generate a smile or at least ensure she knew I was thinking of her. Sending messages as diverse as a joke or inspirational quote lets the receiver know you care. Share an aspect of your day (like a challenge, success, or funny thing), and maybe they’ll reciprocate.

Finally, be open to hearing “no” or “not now” or that it’s not their preferred method of communication, or to just not getting much of a response. The weekly text worked well with my busy son, so I offered the same to my busy daughter. But she wasn’t interested in a texting routine, preferring to continue with phone calls on an as-needed basis.

After five years of newsy updates with Justin, my tone abruptly changed in an August text. My anxiety skyrocketed as our young, unvaccinated grandchildren returned to in-person school under the Texas mask mandate ban and the Delta surge. For the first time since the pandemic began, my high-risk husband and I couldn’t isolate because Delta might (and did) follow our grandchildren into our home. I vented my angst, virtually treating my text as a personal diary entry, saying I felt I had no control over our exposure. I told Justin I stopped masking at the gym because my actions didn’t matter, and the inconsistency between appropriate pandemic behavior and actual behaviors was driving me crazy. I concluded my text with “Feel free to ignore my musing but also feel free to offer insights. Thanks for listening.”

I felt better with those swirling feelings put into words. I wasn’t sure how he’d respond but figured at worst he wouldn’t comment on my tirade, which was fine. Justin talked me off the ledge in a way I didn’t expect. He replied to say that my reaction to the school mask mandate ban was understandable. He added, “It’s similar to dieting though, if you eat one cookie, is it better to binge and make the damage worse or get back to eating well? It’s not about 100% control right now, it’s about lowering the risks you can,” through vaccination, masking, and distancing. I felt my anxiety melt away. I felt validated—something I didn’t realize I needed. He was right, that taking some precautions in an imperfect world still helps. Based on this, I created a plan to maximize my personal safety and quality of life. (Our masked grandchildren still caught Covid and brought it home after two weeks of school, however.)

That interaction transported Justin from adult child to trusted advisor, and I shifted from needing assurance that he’s OK to being reassured that I have someone like him in my life—someone intelligent, thoughtful, and wise. It’s far more than I ever expected to receive from a text message.