What’s The Deal With Seinfeld?

by Sonia Saraiya: Netflix put the classic sitcom on its streaming service in October. It’s served as a reminder of just how long ago the ’90s were… 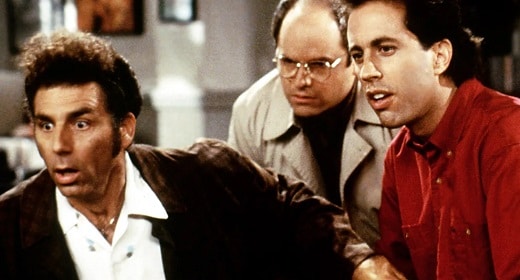 too am watching Seinfeld. Sometimes I come across an episode I haven’t seen before, but mostly, I’m rewatching it, revisiting the familiar characters, their reliable frailty, the comedic timing so finely calibrated it becomes formulaic. It’s absurd, in a moment where there is so much other content vying for my attention, that I would turn to a 30-year-old sitcom to entertain me. But because Netflix acquired the exclusive streaming rights to Seinfeld (for reportedly more than half a billion dollars) and began hosting the show in October, it’s supremely easy to throw it on in the background and let its rhythms wash over you.

So easy it’s almost dangerous. Seinfeld is like the anti-binge show, a series very much designed to be watched amid all the other crap on TV on a Thursday night. In single half-hour chunks, its characters are like a balm, implicitly forgiving you for every unkind word you’ve considered saying, for every time you ranked getting laid over showing up for your loved ones. But for more than a few episodes at a time, these people and their concerns—so self-absorbed, so entitled, so stupid—are a little deadening to watch.

Seinfeld’s leads are a tiresome quartet; in the show, everyone who meets them ends up deeply regretting it. Still, from their vantage point as bottom-feeders, they find ways to skewer conventions. I don’t think I’ve bought a present for a host in my life without thinking about the chocolate babka debacle in season five’s “The Dinner Party,” a comedy of errors about what goes into the effort of showing up at someone’s door with something nice.

Co-creator Larry David has continued to explore these modes in his HBO series Curb Your Enthusiasm, which premiered in 1999 and just this week produced another episode so funny it’s practically painful. But Seinfeld had network-television machinery behind it. Each episode of a classic multi-camera sitcom—like Friends, The Office, and The Big Bang Theory, which have all starred in staggering streaming-rights acquisition deals over the last few years—is a carefully calibrated unit of content designed to go down as easy as possible. These shows produce consistency as a perk—life is unreliable, but TV doesn’t have to be.

So Seinfeld is not just a show: It’s a whole state of mind. Every episode sounds the same: the opening lip-pops and tongue clicks, the way George Costanza (Jason Alexander) exclaims “Jerry!” with that perfect aggrieved tone, the singsongy punch lines from Jerry Seinfeld’s stand-up. It gets so that you can easily create a Seinfeld mood in your own life—tack on a “Jerry!” at the end of a complaint; repeat a question with different inflection; do one of those big Elaine (Julia Louis-Dreyfus) groans at a restaurant table; throw open the door to the apartment you don’t live in, like Kramer (Michael Richards). Indeed, the show invites you to participate in the lexicon of the characters, which is why so much of what I know about Seinfeld comes from other people quoting it.

But sometimes the show’s machinery is so seamless it’s slick. In my current rewatch, I’ve just finished season four; I’ve grown so tired of Seinfeld’s increasingly inane opening monologue that I wish I could just skip it. As the show became more popular, some of the balance between the characters’ foibles and the consequences of their actions was lost in favor of comedy that gets gimmicky. With an audience that cheers and claps wildly when the characters are at their most venal, it feels less that Seinfeld is subverting expectations and increasingly like the show is pandering to them.

Even so, I’m still watching it. And to be honest, these days when I’m watching Seinfeld, most of what I’m encountering is my own age. I grew up knowing the show as a ubiquitous fixture of NBC’s Must See TV, and a must-see in our house. (I don’t think I understood a lot of what was happening, but I remember thinking it was very funny when Jerry told a tightrope walker to break a leg, and then he really did break a leg.) Then came the series finale, in 1998, and the way it made everyone mad—on the way to school the next day, even the shock jocks on the radio were complaining about it. When I got to college, Seinfeld setups and punch lines seemed to arise out of every other drinking night. I’m not sure you can escape a four-year liberal arts education without having to listen to some guy shout “shrinkage” as everyone else collapses in laughter.

Now I’m hearing from people who are watching the show for the first time—both young viewers who don’t remember the original run and older viewers who never got around to it. It’s prompted me to try to disentangle Seinfeld from my own personal history, to unmoor it, even, from the decade in which the show is so firmly based. It was the ’90s; oh, was it ever the ’90s. The show’s anxieties are inextricably tied to the that decade—answering machines, VCRs, the discomfort its straight characters feel upon encountering queer people. (“Not that there’s anything wrong with that!”) I’ve also been watching Impeachment: American Crime Story—another window to the ’90s—and marveling at how the endemic misogyny of Seinfeld’s moment was distilled and refracted through Elaine Benes—and how brilliantly Louis-Dreyfus manages to meet and also refute the expectations placed on her character, even as she remains underwritten for most of the show’s run.

At the same time, the show is sometimes weirdly prescient, especially about the future of TV. The entire fourth season, which showcases George and Jerry selling their pilot of a show about nothing to NBC, feels to me like the beginning of the end of network television. It has a snake-eating-its-own-tail meta quality that is both brilliant and supremely weird—and seems to serve as a vehicle for the show’s veiled critiques of its own sausage-making process. When NBC head Russell Dalrymple (Bob Balaban) leaves the TV business to join Greenpeace to impress Elaine (who, among her other disjointed character traits, is sort of an activist?), it feels like a harbinger of things to come.

But if network TV were dead, maybe it wouldn’t be so damn watchable. I have Seinfeld on DVD somewhere, but it’s not really the same; one of the reasons I’m watching Seinfeld now, on Netflix, is because I know others are watching it too. Seinfeld is like an extraordinary device that communicates the things about humanity we are most ashamed to acknowledge. Shame is a social emotion; it requires other people to function. Seinfeld is a show that is dramatically enhanced when shared with a viewing audience, even if it’s just an implied one. It’s imperfect, watching a broadcast show 30 years later on a streaming platform—but it’s either this or TBS reruns of Seinfeld, and those don’t seem to have quite the same reach. Maybe society has changed a little since the heyday of Seinfeld. But in the last few decades, the sitcom—and how we watch it—has changed entirely.