The Father of Modern Yoga Is Krishnamacharya

by Leah Sugerman: Do you know who Tirumalai Krishnamacharya is? Whether you’ve heard of him or not, if you practice yoga today, 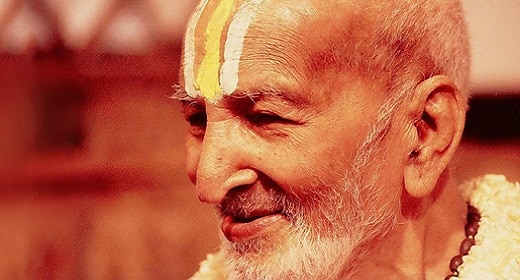 he has greatly influenced your practice (and potentially even your life). Often referred to as the “Father of Modern Yoga” for his crucial role in revolutionizing the asana practice and spreading yoga to the Western world, Krishnamacharya is likely who you can thank for your modern-day yoga practice.

He spent much of his youth studying the sacred scriptures and traveling around India to learn from prominent Vedic, Ayurvedic, and yogic gurus.

In 1926, the Maharaja of Mysore, India heard about the skills and scholarship of Krishnamacharya and invited him to the Mysore Palace to teach yoga to him and his family.

The Maharaja was so impressed by his conduct, knowledge, and expertise, that he quickly promoted Krishnamacharya to became one of his respected advisors.

Why Is Krishnamacharya Considered the “Father of Modern Yoga?”

As a yoga guru, Krishnamacharya is largely credited with the revival of Hatha Yoga and the spread of yoga around India and to the West.

Throughout the 1920s, Krishnamacharya held countless “demonstrations” to promote popular interest in yoga. He would perform “impossible” feats like cease his pulse, stop cars with his bare hands, display incredibly difficult asanas, and lift heavy objects with just his teeth.

The Maharaja of Mysore was interested in promoting yoga throughout his kingdom and all of India, so he asked Krishnamacharya to open a yoga school and institution.

Through his instruction, yoga became a very physical art with influences from gymnastics, martial arts, dance, and even military drills. Ultimately, Krishnamacharya created our modern-day yoga poses – less than 100 years ago.

He is also largely credited with the creation of modern-day Vinyasa Yoga, since he was one of the first and most prominent teachers to link movement with breath.

Leah SugermanLeah Sugerman is a yoga teacher, writer, and passionate world traveler. An eternally grateful student, she has trained in countless traditions of the practice and teaches a fusion of the styles she has studied with a strong emphasis on breath, alignment, and anatomical integrity. Leah teaches workshops, retreats, and trainings both internationally and online.