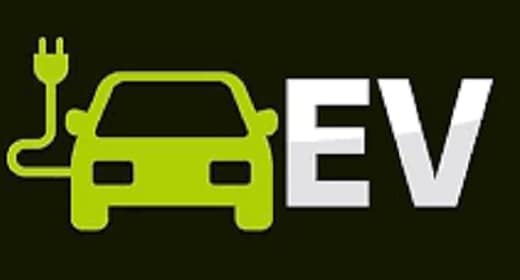 Full battery electrics took 21.3% of the market. Overall auto volumes were down to 227,630 units, the lowest December result of recent decades. Seeing significant month-on-month growth were three of the most affordable electrics, the VW e-up!, Renault Twingo, and Dacia Spring. I estimate that petrol will likely fall to near-zero at some time between 2024 and 2025, if not before, but much depends on the trends in hybrids and especially plugin hybrids, which will take over from petrol in the short-to-medium term. In the longer term almost everything will move to BEV.

Here’s a graphic show this evolution in powertrain shares: For those folks who have been requesting it, here’s a graphic of the recent evolution of powertrain sales volumes: More surprising was a big push by the Volkswagen e-Up! which had been averaging around 2,000 units per month in H2 2021, but saw a remarkable 5,343 units in December, beating out the Zoe to grab the #2 spot, and not too far behind the Tesla Model 3.

Other breakout December performances were shown by the Renault Twingo (recently averaging ~540 per month but with 1,937 in December) and the Dacia Spring (averaging ~370 but with 1,842 in December).

These three diminutive BEVs are some of the most affordable currently available, so it’s great to see their supply volumes step up in Germany. I’m pretty sure there is a deep well of unmet demand for these great value BEVs across Europe. Who knows what their sales volumes might be if unconstrained by supply? Taking a step back from the ebbs and flows of single-month performance, let’s look at the whole of Q4 2021. The top 3 contenders are the same, but — contrary to December’s result — the Smart Fourtwo, Volkswagen ID.3, and Skoda Enyaq are in the next three positions: There aren’t too many other surprises in the top 20, but it’s interesting that the Porsche Taycan doesn’t even make the grade in its home market of Germany (it’s at #24), whilst being at #10 in Norway!

For folks wondering, the Tesla Model Y is also just outside the Q4 top 20… at #21. That will surely change in 2022 as soon as the Berlin Gigafactory gets rolling.

Looking at industry players, starting with brands, Volkswagen brand took the top spot in Q4 with 14.8% share of all BEVs, ahead of Renault (12.3%), with Tesla close behind in third (11.5%).

In terms of Q4 manufacturing groups, the Volkswagen Group was very dominant, over 50% ahead of its nearest rival, Renault-Nissan. Here’s the chart: 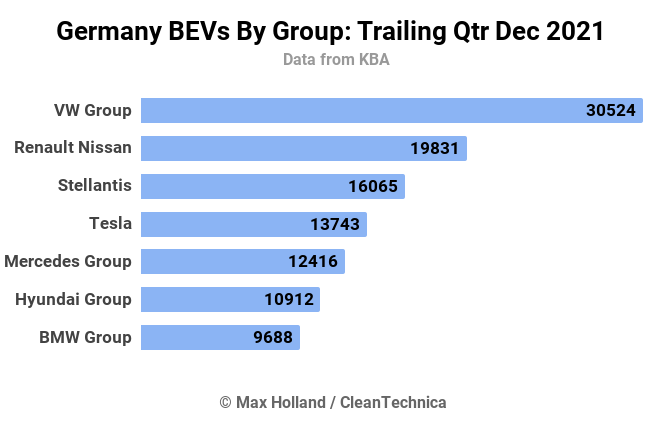 2021 was a banner year for the electro-mobility transition in Germany, with Q4 pulling the country above one-third plugin share, and helping to rapidly push Europe to new highs. To have been able to continue the remarkable growth trend set by 2020 was great to see. Recall that Q4 2019 was only around 3% share!

Being Europe’s largest market, Germany’s trajectory forwards in 2022 will be particularly influenced by overall volume of BEV manufacturing. With long waiting lists, demand is definitely not the bottleneck (see my recent France report for a discussion), so 2022’s result will be at the whim of how many BEVs are actually being made.

However, I don’t see European manufacturers as holding back their transition to making more BEVs (and PHEVs), as these are obviously the only growth area in a highly pressured industry. The constraint, if any, will be battery supply. Temporarily shifting the balance between BEVs and PHEVs (or even REX-BEVs) can make tight battery supply go a bit further, if necessary.

I expect we will see Germany’s plugins stay above 30% in Q1 2022, and steadily climb into the mid 40s by Q4. The balance between PHEVs and BEVs will depend on that cell supply, and how quickly manufactures ramp up BEVs. Other things being equal (but they aren’t really at the moment, are they?), their relative weightings will remain close to recent trends.