“Mystery” US Energy Storage Company Breaks Through Veil Of Silence

by Tina Casey: The firm FlexGen is set to make its mark its mark on the US energy storage industry, with an assist from North Carolina’s powerful network of rural electric cooperatives… 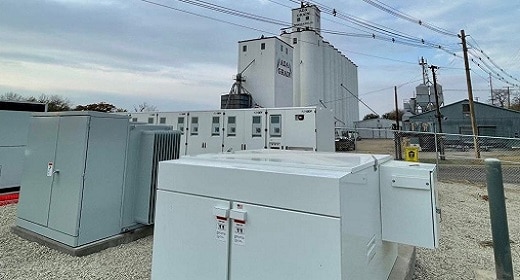 The energy storage firm FlexGen has barely scratched the media surface, but apparently things have been quite busy over there. In the latest development, the North Carolina company has hooked up with its home state’s electric cooperatives in a new venture that adds 40 megawatts of punch to the rural decarbonization movement.

Cities get a lot of credit for their role as laboratories of change, but the nation’s sprawling network of rural electric cooperatives is carrying a  decarbonization torch of its own.

For those of you new to the topic, electric cooperatives are member-owned utilities chartered under the federal government. They were formed as a Depression-era economic development program aimed at bringing electricity to farmers, most of whom were still left in the dark in the 1930’s due to lack of interest on the part of private sector investors.

Currently, there are 900 cooperatives in 47 states, serving 40 million people, or about 1/8 of the US population including urban as well as rural areas.

Though sometimes hampered by long term fossil energy contracts and other encumbrances, electric cooperatives have a public benefit mandate that empowers them to innovate on energy delivery and introduce new technologies.

As a group, electric cooperatives got an early foothold in the renewable energy field through hydropower. More recently they picked up the wind energy ball and ran with it, and they have been pushing the solar energy envelope as well.

That brings us to FlexGen. The company sailed under the CleanTechnica radar when it launched a relationship with the lithium-ion battery company Contemporary Amperex Technology Co., Limited (CATL) a while back, although CATL is a a regular on the CleanTechnica site on account of its association with Tesla.

We missed the boat again last January when FlexGen and CATL announced two new standalone battery storage projects in Texas with a combined total of 110 megawatt-hours. That announcement surfaced on January 5, 2021, and the very next day there was a big event in Washington, DC that distracted everyone for a while.

At the time, FlexGen reported that its “HybridOS” platform had more than 260 megawatts and 171 megawatt-hours of storage under its belt, totaling more than 202,000 hours of runtime in commercial operation. With a total of 40 megawatts, the new North Carolina projects add a significant chunk of change to the FlexGen pot.

As described by the organization North Carolina’s Electric Cooperatives, the aim of the FlexGen project is to add “local energy resources in communities for enhanced grid infrastructure resilience and reliability for co-op consumer-members.” That dovetails nicely with renewable energy resources, though renewables are not necessarily on the table for this particular project (more on that in a sec).

“Collectively, the 10 battery projects will provide 40 MWs of power and will be charged when demand for electricity is low and discharged during moments of peak demand,” NCEC explains. “This not only enhances electric reliability but is expected to provide cost savings over the lifetime of the batteries. Because cooperatives are not-for-profit, at-cost energy providers, co-op members will benefit from those savings.”

Amadou Fall, the COO of NCEC, hinted that renewable energy will play a larger role in future years.

“Cooperatives remain committed to innovation that advances our Brighter Future vision for electricity that is increasingly sustainable, affordable and reliable, and supports our goal of reaching net-zero carbon emissions by 2050,” he said.

NCEC also points out that the new energy storage assets highlight the ability of electric cooperatives to accelerate the distributed energy trend, in which resiliency and reliability are improved by ditching large, centralized power plants in favor of decentralized energy networks.

“By monitoring and coordinating distributed resources, cooperatives are acting as a ‘distribution operator.’ In this role, cooperatives can manage resources across the state collectively to maximize benefits, including greater visibility across the system, optimized operation for enhanced grid resilience and increased reliability,” NCEC enthuses.

As for that “Brighter Future” envisioned by NCEC, that is a collaborative decarbonization venture involving 25 of the 26 electric coops in North Carolina. The current portfolio includes less than 5% coal power, compared to the national average of 13%.

Brighter Future leans heavily on nuclear energy at 54%, which may or not be financially sustainable over the long term, considering the falling cost of wind and solar. The strategy also calls for continued reliance on natural gas peaker plants.

Despite the continued reliance on nuclear energy and natural gas, the foundational element in the Brighter Future plan is the ability of the NCEC network to coordinate an ever-increasing roster of distributed resources, including those mobile energy storage devices called “electric cars.”

“Electric co-ops are able to leverage thousands of resources across the state — including community solar, microgrids, electric vehicle chargers, and even smart thermostats and water heaters — to dispatch generation when it is needed and trim electricity use during times of peak demand,” NCEC explains.

NCEC also sticks the knife into investor-owned utilities, and twists it:

“This edge-of-grid coordination, which we are able to achieve through ongoing engagement with our consumer-members, is what truly sets electric cooperatives apart from other utilities. Because we are based in and belong to the local communities we serve, we have strong relationships with our members and can work with them as we shape the future of the electric grid and make power more affordable, reliable and sustainable for everyone.”

While all this activity going on, it’s easy to forget that North Carolina also has considerable offshore wind energy assets on the sidelines, waiting to be tapped in.

In an attempt to break up the logjam, North Carolina Governor Roy Cooper issued an Executive Order last June, aiming for 2.8 gigawatts in offshore wind by 2030 and 8.0 gigawatts by 2040.

He just may be on to something. Opponents of offshore wind turbines often cite aesthetic concerns, but offshore wind technology is evolving into a deep-water model that practically eliminates those objections.

Along with improvements in turbine technology, new wind farms along the North Carolina coast will be also be able to reap the benefits of new energy storage technology and hybrid configurations that juice renewable energy output and cut costs.