Offshore Wind Catches Fire In Empire State While Others Fiddle

by Tina Casey: Another sign that coal is toast: New York State stakes another $500 million to beat its East Coast rivals to the offshore wind energy punch… 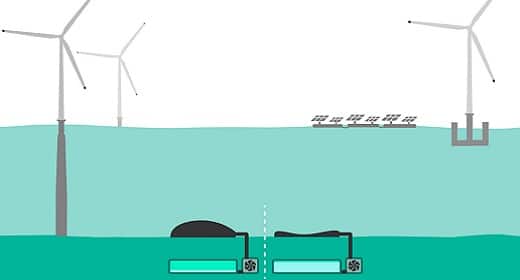 In the race to harvest offshore wind energy along the Atlantic coast, New York is not messing around. The Empire State has just launched a new $500 million investment program aimed at sealing the title of Offshore Queen, as announced by Governor Kathy Hochul during her State of the State address this week. New York better watch out, though. Little old New Jersey is already nipping at its heels.

The new $500 million wind program will accelerate New York’s already impressive offshore wind energy portfolio. To date, the state claims  5 offshore projects and 5 ports under development, and has procured a total of 4,300 megawatts worth of offshore wind energy towards a goal of 9,000.

That is so, and they are not letting the grass grow under their feet. Governor Hochul’s big wind energy announcement will muscle up the state’s ports, manufacturing, and supply infrastructure, creating more than 2,000 new green jobs along with the new clean kilowatts.

The $500 million is just for starters. Hochul expects to leverage private capital to add more than $2 billion to the state’s economy. As she explains, the aim is to ensure that “New York has the strongest offshore wind energy market along the Eastern Seaboard, enabling us to be the offshore wind supply chain hub for other projects up and down the coast.”

Governor Hochul also announced that NYSERDA is launching its next offshore wind energy procurement program this year. They anticipate at least 2 gigawatts in new projects coming into the the pipeline.

According to NYSERDA, the 2 gigawatts would bring the state’s total offshore wind to the equivalent of 4.5 million homes, so the next hurdle is getting offshore wind energy over to where people can use it. They have that covered, too.

Apparently you ain’t seen nothing yet. All of this activity is taking place in relatively shallow waters, where conventional monopile wind turbine construction is the norm. Hochul also let slip that NYSERDA is already working on a new offshore wind master plan that will tap deeper waters farther offshore, which means that floating wind turbines will be in the mix.

Don’t Look Back, Something Might Be Gaining On You

New Jersey had a shot at becoming the very first East Coast state with an offshore wind farm, thanks in part to a 2014 US Department of Energy grant aimed at spurring innovation in the offshore industry. The total funding pot was $141 million spread among three projects, one of which was the proposed 6-turbine Fishermen’s Energy demonstration wind farm off the coast of New Jersey.

Unfortunately for wind fans, the administration of former Governor Chris Christie was apparently not a willing partner. Uncertainty over the future of the state’s wind industry abounded during his tenure, partly because its Public Service Commission was slow to form an appropriate regulatory structure for wind energy. Fishermen’s Energy encountered one obstacle after another and the Energy Department finally had to claw back the company’s $47 million share of the innovation grant in 2017.

So, despite its generous helping of federal offshore wind lease areas ripe for the picking all along its coastline, New Jersey sat on the sidelines while New York raced ahead, that is, until Governor Christie left office.

Since then, New Jersey has shaken itself out of the doldrums. The state is already threatening New York’s plans to dominate the Atlantic Coast for monopile wind turbine manufacturing, and offshore lease activity has picked up considerably.

Offshore Wind Energy Rivalry Could Be A Friendly One

One prize that New Jersey missed out on was a national wind energy R&D consortium established by the Energy Department in 2017. New York State was a front runner in the competition to lead the program, and NYSERDA won the $18.5 million funding prize in 2018.

Now it looks like everyone is going to be in one big happy family. Earlier this week, the New Jersey Board of Public Utilities announced that it has joined the National Offshore Wind Research and Development Consortium, which it describes as a “prominent U.S. offshore wind research organization.”

NJBPU President Joseph L. Fiordaliso, who was appointed to his post by current New Jersey Governor Phil Murphy, could hardly contain his enthusiasm.

“We are excited to be joining NOWRDC as the representative for the State of New Jersey,” he said. “Our participation in this prominent national organization will aid our offshore wind efforts and play a key role in helping us meet Governor Murphy’s goal of 7,500 MW of offshore wind energy by 2035.”

“New Jersey’s membership in NOWRDC allows the state to participate in regional research and monitoring activities as recommended by the New Jersey Offshore Wind Strategic Plan and to further the research into offshore wind activities with a goal of lowering the cost of Offshore Wind,” NJBPU added, further adding that the membership “provides New Jersey a platform to collaborate with other states in coordinating regional monitoring and scientific and technical research at the state and regional levels to address issues related to offshore wind energy project planning, siting, construction, and operation.

They’re going to need all the help they can get. Coastal and fishing industry stakeholders in New Jersey have already geared up for a fight over the new lease areas, so stay tuned for more on that.

Meanwhile, it’s worth noting that President Joe Biden’s Build Back Better climate action bill would help push things along even faster, if only West Virginia Senator Joe Manchin would stop fiddling around and start supporting the 50-strong Democratic caucus in the Senate. With his vote and Vice President Kamala Harris as tie-breaker, Build Back Better is a shoe-in.

Senator Manchin has been holding onto his vote, for reasons best known only to himself. It could be a case of sour grapes, considering that landlocked West Virginia will not share in the offshore wind gold rush. Still, there are plenty of opportunities to grow new green jobs in the Mountain State, and Build Back Better would assist families with child care and other expenses related to employment.

Manchin’s Republican colleague, West Virginia Senator Shelley Moore Capito, could push Build Back Better over the finish line by voting with the Democratic caucus, but she and all 49 other Republican senators are holding back, too. In that context it may be somewhat unfair to blame Senator Manchin for singlehandedly killing his own party’s signature legislation, but them’s the breaks.